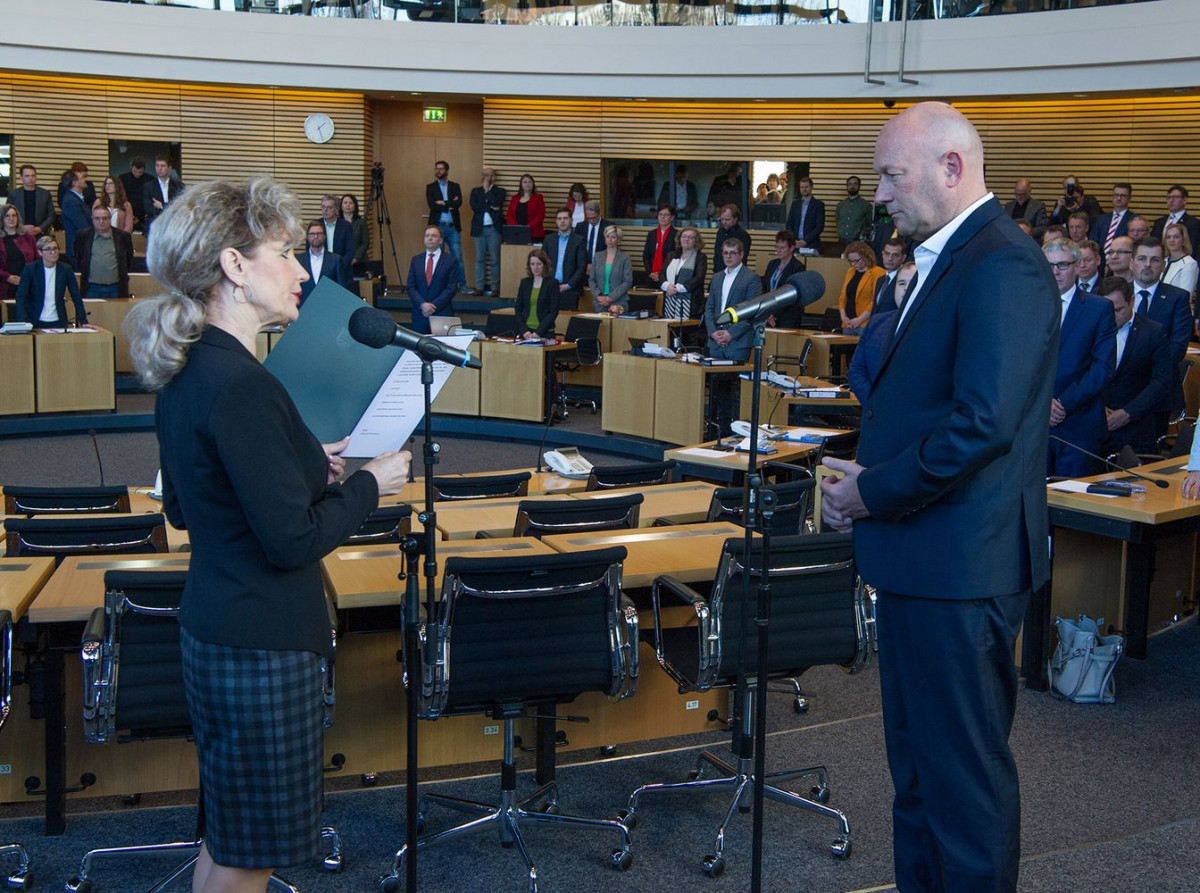 Thomas Kemmerich of the pro-business Free Democrats (FDP) has been elected state premier by the Thuringia state parliament with support of the far-right Alternative for Germany (AfD), in what many politicians see as breaking a taboo. Only one day later, the FDP group in the state submitted a motion to dissolve the parliament in order to clear the way for new elections, and said Kemmerich will give up his office. The move came after chancellor Angela Merkel, whose Christian Democrats (CDU) also voted for Kemmerich, said it was "unforgivable" that a state premier had been elected expressly because of the support of the AfD. [UPDATE adds FDP motion to dissolve parliament, reaction by German chancellor Merkel, report by Recharge on Kemmerich campaign]

Thuringia’s parliament has elected Thomas Kemmerich from the business-friendly Free Democratic Party (FDP) as new state premier. This came as a surprise result after the far-right populist Alternative for Germany (AfD) likely threw its votes behind him in the secret ballot, reported Associated Press. For many politicians, the vote breaks a taboo as the AfD lined up with Chancellor Angela Merkel’s Christian Democratic Union (CDU) and the FDP.

Only one day after the vote, the FDP group in the state submitted a motion to dissolve the parliament in order to clear the way for new elections, and said Kemmerich will give up his office. "Kemmerich wants to remove the stigma of AfD support from the MP's office," said the group.

The move came after Merkel called the election of Kemmerich with far-right help "unforgivable". The result must be reversed," she said during a press conference while on a visit to South Africa, calling the election "a bad day for democracy."

For now, Kemmerich’s election means the defeat of the planned leftist-green minority government coalition under incumbent Bodo Ramelow (Left Party). It is the first time a state leader has likely been elected with the help of the AfD – the only major German party that questions human influence in climate change. The party has made its critique of policies to reduce greenhouse gas emissions a major issue in its political strategy and opposes many elements of Germany’s energy transition policy.

Many German politicians had called for snap elections. The FDP only just made it into the state legislature in the October 2019 election.

Merkel's coalition parties CDU and the Social Democrats (SPD) had taken another beating in the Thuringia state election in October 2019, which the Left Party clearly won. However, Ramelow’s government coalition with the SPD and the Green Party lost its majority, and now planned a minority government.

Recharge had reported that Kemmerich during his campaign for state elections in October 2019 had lobbied for a ban on wind power in forest areas and a stringent distance rule for turbines to nearby settlements. He also defended diesel cars, lashed out against Swedish climate activist Greta Thunberg as a “16-year-old brat explaining the world,” and warned of “climate hysteria,” wrote Recharge.

State legislators elected Kemmerich on a 45-44 vote, with one abstention. The FDP MP threw his hat in the ring after left-wing incumbent Bodo Ramelow failed to secure a majority during two rounds of voting by parliamentarians. A candidate fielded by the AfD, the second-strongest party in Thuringia, won no votes after having secured his party's 22 votes in previous rounds.

The CDU leader of Thuringia, Mike Mohring, said he expected Kemmerich to maintain a “clear separation” from the AfD even though the far-right party helped elect him to office, Bloomberg reports. Mohring added that there was no collusion between the CDU and AfD.

Facts on the German state elections in Thuringia