Car giant VW plans a "major electrification initiative" with more than 30 new purely battery-powered electric vehicles by 2025. The company today presented key building blocks of the  "TOGETHER - strategy 2025", including measures on e-mobility, battery technology, digitalisation and autonomous driving. According to a press release, VW forecasts that in 2025, e-car sales will be between 2 and 3 million units, equivalent to some 20 to 25 percent of the total unit sales expected at that time. Volkswagen will present the detailed strategic program before the end of the year.
VW CEO Matthias Müller said at a press conference the company faced the largest transformation of its history. VW's core mission was to turn the company into a global leader in sustainable mobility. "Sustainability in a comprehensive sense will determine our future actions," Müller said. He added the technology for e-car batteries and automated driving were to become core competences of the group. "The word 'evolution' is much too weak to describe what lies ahead [...] not only automobiles face dramatic changes, but mobility will be defined in a new way."

Germany’s largest power grid operator Amprion has said it is optimistic about realising grid extensions deemed necessary for the country’s energy transition, reports Frankfurter Allgemeine Zeitung. “The Energiewende is lagging behind a little. But we now have a much improved legal framework and will manage it,” said Chief Technical Officer Klaus Kleinekorte. The Federal Grid Agency said last week that the completion of important power lines would be delayed by at least three years. Amprion said it would step up grid investments to 550 million euros this year, and planned to invest a total of 5.5 billion euros into power highways by 2025.

Find a report by news wire dpa on the subject in German here.

For background, read the CLEW dossier The energy transition and Germany’s power grid.

“This is how the government shields carmakers from environmental standards”

The government is meant to shield the public from harm, but internal government papers seen by Süddeutsche Zeitung and other media outlets show the goal of transport policy is to protect large carmakers from stricter environmental standards instead, writes Klaus Ott. “The links between the car industry and government are strong, and the influence of BMW, Daimler and VW enormous.” The companies’ CEOs and their emissaries are always welcome guests in Berlin, and the government fulfils their desires whenever possible – especially when it comes to preventing stricter CO2 limits at EU level, according to Ott.

Find a shortened version of the article in German here and the full version (behind paywall) here.

Germany’s Federal Court of Justice (BGH) in April ruled that industry exemptions for electricity grid fees in a 2011 decree are void because they didn’t have a sufficient legal basis in the Energy Economy Law (Energiewirtschaftsgesetz). Energy intensive industry like aluminium smelters have been exempt from some 3.5 billion euros in grid fees since 2012, Klaus Stratmann writes in the Handelsblatt. The Ministry for Economic Affairs and Energy wants to evaluate whether the law can be fixed at the same time with the already-pending power market reform, the author says. But Green Party politician Barbara Höhn insisted it was time to scrap the industry privileges as a whole.

Germany should re-organise the financing of its energy transition, argues Klaus Stratmann in an op-ed for the Handelsblatt. The BGH ruling was showing that the current system is standing “on shaky grounds”, he says. The current system of many surcharges on the power price on the one hand and exemptions from these payments for industry on the other hand, was leading to (social) injustice. Shouldn’t the energy transition as a societal task be paid for by taxes – at least partially, he asks?

“More space for power from wind and solar”

Electricity generated by conventional power plants is blocking the electricity grid, not the wind power from Germany’s north, said Johannes Remmel, Green environment minister of the state of North Rhine-Westphalia, according to Frankfurter Allgemeine Zeitung. “Thus, the demand must be to take coal power plants off the market, so that the development of renewables can continue,” said Remmel.

Read a CLEW article on the reform of the Renewable Energy Act and the slowing down of wind power development.

Local utilities as well as municipal governments can be the vanguard to secure participation of the population in the project Energiewende. This is the result of a research project by Fraunhofer ISE, which had been conducted since 2013. Citizen participation would in turn lead to more acceptance of the energy transition by the people and make the big changes more citizen-friendly. The project focused on non-monetary ways of participation and tested several possibilities, such as the “energy-flow-visualisation” for the small village Wunsiedel.

The German industry wants to force gas extraction by hydraulic fracturing in the country despite opposition in politics and society, writes Michael Bauchmüller in Süddeutsche Zeitung. After waiting for 5 years due to unclear regulatory circumstances, the Federal Association of Natural Gas and Oil (BVEG) announced that it could not stall any longer and would start the permit process under current laws. The applications would have “very good prospects of approval”, because they would be based on regular mining law, writes Bauchmüller. In their coalition agreement, the ruling Christian and Social Democrats parties had agreed on regulating the technology by law. But an existing draft has not been decided on for a year. There are proponents and critics in both parties.

The cost for wind and solar generated electricity could be reduced by between 26 and 59 percent by 2025 with the right regulatory and policy framework, according to the IRENA report “The Power to Change”. Even in Germany, which already had very cost-competitive structures in 2015, for example for solar PV at utility-scale, reductions of about 44 percent until 2025 were possible for this form of energy. “Given that solar and wind are already the cheapest source of new generation capacity in many markets around the world, this further cost reduction will broaden that trend and strengthen the compelling business case to switch from fossil fuels to renewables,” said IRENA Director-General Adnan Z. Amin, according to a press release.

Read the press release here and the full report “The Power to Change” here. 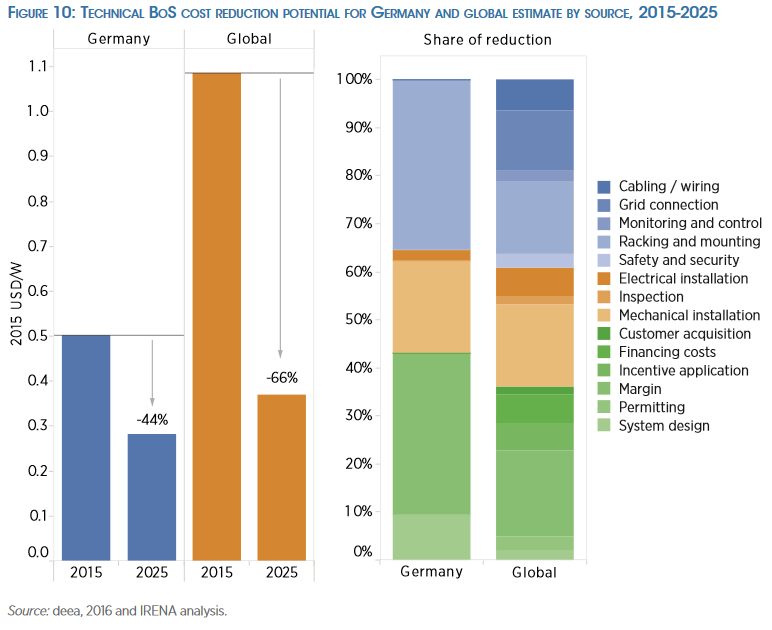 “Priorities for energy research in Germany in 2016”

The Federation of German Industries (BDI) has published a list of priority fields in which it believes energy research should be foremost conducted. Among the prioritised technologies are direct current grids, fuel cells, sector linkage, wind offshore, e-mobility (including batteries), energy efficient buildings, smart grids and photovoltaics. Other technologies like fracking, carbon capture and storage (CCS) and geothermy and marine energy should receive less focus in energy research, the BDI recommends.