Germany’s wind power industry could soon face “a major period of austerity”, Franz Hubik writes in Handelsblatt Global Edition. “We have seen a 40 percent fall in the price of wind turbines in the last three years” leading to hundreds of layoffs, a representative of turbine manufacturer Senvion told Handelsblatt. Manufacturers need to reduce costs – not least because there are still too many of them in the market, Hubik says. The curtailing of financial support under the new Renewable Energy Act (EEG) will aggravate the situation, he adds.

The German federal government proposes a partnership on resource efficiency for G20 member countries. “We need a strong partnership of all large economic powers so that we don’t keep exceeding our planet’s limits,” said federal environment minister Barbara Hendricks at the opening of G20 government talks on resource efficiency in Berlin. Under the partnership, members would be in constant dialogue to learn from one another and share best practices, she said.
At the same event, the International Resources Panel (IRP) presented its report on the potential and economic implications of resource efficiency. It finds that smarter use of resources can add 2 trillion dollars annually to the global economy. Yet, “economic efficiency is not always equal to resource efficiency”, mostly due to labour costs, said IRP member Prof Paul Ekins at the presentation.

Find the government press release in German here and the IRP report in English here. 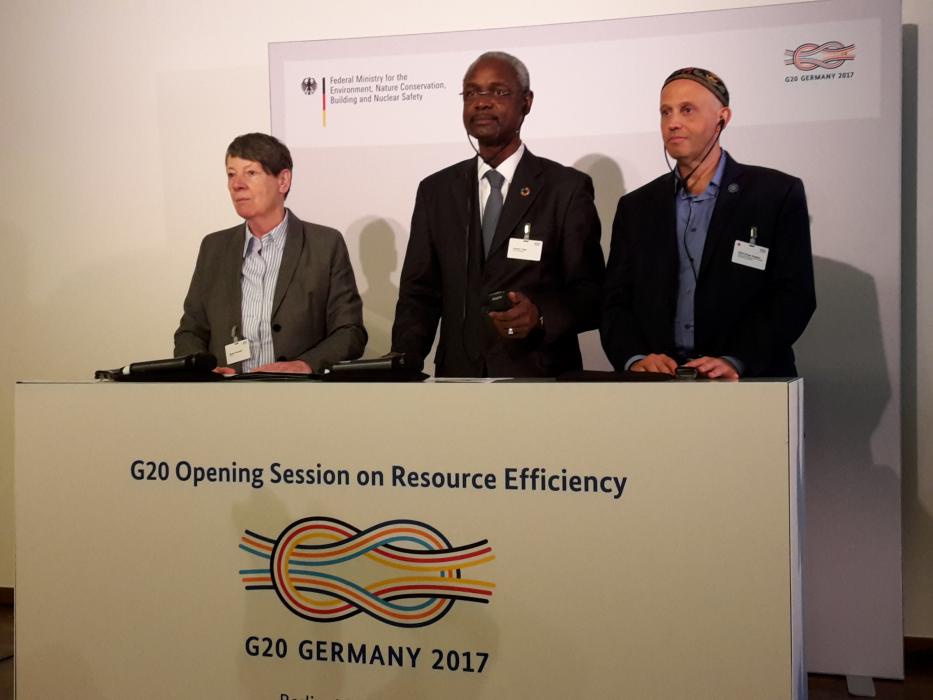 The language used by German car manufacturer Audi and its parent company Volkswagen to handle its emissions fraud scandal speaks volumes about how their managers still underestimate the crisis, Carsten Knop writes in a commentary for Frankfurter Allgemeine Zeitung. At Audi’s annual press conference, CEO Rupert Stadler once again sought to talk as little as possible about the “diesel issue”. At the same time, prosecutors and the police were searching Audi’s headquarters “precisely due to this ‘issue’”, Knop explains. The investigations could shake Audi and Volkswagen at their core, but the executive boards disclaim any responsibility – “these are no good preconditions to achieve the transition to e-mobility,” Knop concludes.

For background on Germany’s automotive industry and e-mobility, see the CLEW dossier The Energiewende and German carmakers.

“Energy is in transition anyway”

It is “nonsense” that Germany’s Energiewende destroys big utilities because it is a peculiar and unique policy, writes Ingo Arzt in a commentary in the left-wing taz. “The global utility world faces massive upheavals that will push companies into bankruptcy if they don’t adapt.” A Chilean renewable tender for half the price of coal power, and China’s renewable push, show where we are headed, according to Arzt. “It becomes evident everywhere that renewables have become unstoppable.”

Find a report on E.ON results and plans for job cuts in yesterday’s news digest.

“Good work gets lost because of bad politics”

The job cuts announced by E.ON are a further example of the Energiewende’s impact on employment in the industry, according to coal mining union IG BCE. “The conventional power industry does no longer earn enough money to pay its employees […] That’s absurd,” said union head Michael Vassiliades in a statement. The union estimates the Energiewende has destroyed 20,000 to 25,000 utility jobs in Germany.

E.ON’s record loss is the result of massive management mistakes, according to Greenpeace. “Anyone who ignores the energy transition for many years, and instead bets on fossil energies, shouldn’t be surprised about huge losses,” said Greenpeace energy expert Tobias Austrup in a statement. “E.ON in particular deserves little pity, because its leftover shop called Uniper still looks away from the new energy world [...] 17 years after the start of the Energiewende, the company still wants to connect an additional coal-fired power station to the grid.”

German chancellor Angela Merkel said during a visit to Poland in February that she hoped the neighbouring country would “cooperate in terms of climate protection”, Ulrich Krökel writes in Rheinische Post. But neither Poland’s current national-conservative PiS government nor its more liberal predecessor under Donald Tusk, the current president of the European Council, “were going to break with the tradition of protecting and subsidising the domestic coal industry”, Krökel writes. Autonomous supply security is sacred for a country that has been occupied by foreign powers so many times in the past, he explains. Poland is therefore wary both of projects like the German-Russian Nord Stream gas pipeline in the Baltic Sea and of new wind parks – “arguably because most manufacturers come from abroad, from Scandinavia, Austria or Germany”, he writes. The author says Polish climate protection advocates could put their hopes on only one problematic asset: smog, which is becoming a growing public health issue in “the China of Europe”.

The German Green Party’s new economic policy concept “is going to demand a lot from companies”, as the party itself puts it, Silke Kersting writes on Handelsblatt Online. The party wants to “reflect environmental costs in prices in an ecologic-social market economy” and “decouple economic growth from the consumption of resources”, Kersting explains. The Greens want to encourage companies “to engage in ecologic modernisation” with a mixture of supportive and restrictive policies, she writes.  “The eco-party needs to get rid of its image to prohibit everything” in order to avoid a further slide in popular support, Kersting adds. The Greens therefore “count on dialogue and the opportunities of change”, she writes.

In a separate commentary for Handelsblatt Online, Kersting calls the Greens’ initiative for ecologic modernisation “a first step that other parties should follow”. But the party’s concept was also “lacking the international perspective”, which was needed to make sure Germany’s economy remains competitive, she writes.

Read the article in German here (behind paywall).

Last year’s increase in CO2 emissions makes it increasingly unlikely that Germany will reach its 2020 climate target, according to a short analysis by Arepo Consult for the Green Party. Emissions would have to drop by 40 million tonnes per year until 2020, whereas one year ago a yearly drop of 30 million tonnes would have been sufficient.
The consultancy estimates that emissions rose from 902 million to 906 million tonnes in 2016. It argues that structural change in the power sector, more support for efficiency, and an energy transition in the transport sector are urgently necessary to make rapid progress on emissions. Spiegel Online ran a long article on the study entitled “Good bye climate target”.

“Transmission highways above ground after all?”

Parts of Germany’s electricity transmission highway dubbed Suedostlink, running from the windy north to industrial centres in the south, could be constructed above the ground - contrary to earlier planning, Marko Jeschor writes in Mitteldeutsche Zeitung. Officials in central Germany are worried that ground cables could damage too much of the fertile soil in the Salzlandkreis region in central Germany, he writes. The ground cable’s ten-meter wide concrete channel would require “massive” construction work, Jeschor explains. Grid operator 50 Hertz had already said that the cable, which is slated for construction by 2022, could also run above the ground, Jeschor adds.