Factsheet
The shift to a low-carbon future is turning the economy inside out. Policy has a crucial role to play, but ultimately it is businesses that will make the energy transition happen. In Energiewende home country Germany, many start-ups take advantage of the transformation by bringing novel business ideas to market and by snatching market share from incumbents in sectors such as renewables, heating or mobility. The green start-up scene is so lively the country has been dubbed a "Green Energy Valley". This factsheet provides a quick review in figures.

How many green start-ups are there in Germany?

In their yearly survey of the country's green start-up scene called Green Startup Monitor 2018 (GSM, available in English), the Borderstep Institute and the German Startups Association define green start-ups as companies that are younger than 10 years, innovative, plan to expand, and contribute to the environmental targets of a green economy. The authors estimate that Germany currently boasts around 6,000 green start-ups that fit this description. Needless to say, not all of them are directly involved in the energy transition, but might instead focus on recycling or conservation projects. The report puts the total number of start-ups in Germany at 23,700.

In contrast, Oldenburg University and Borderstep use a different description in their Green Economy Start-up Monitor 2017 ("Gründungsmonitor", also available in English), which instead considers young companies of “significant economic relevance” – following a definition used by Germany’s statistical office Destatis. According to this publication, 36,400 new green economy businesses were founded from 2015 to 2016, compared to a total of around 250,000 start-ups. On average, more than 21,000 green economy businesses were formed per year from 2006 to 2014.

The government-owned KfW Bank, which offers financing for business development, uses yet another definition in its KfW Start-up Report 2018 (also available in English) and arrives at a total number of 60,000 start-ups in 2017. Of these, 12,500 were “both innovative and growth-oriented.”

A quarter of German start-ups can be classified as green

The data and graphs below are taken from the Green Start-up Monitor (GSM), which offers the most detailed and up-to-date picture of Germany's green start-up scene. The report is based on a survey of around 300 green start-ups and almost 900 non-green start-ups. A quarter of all start-ups are classified as "green" because "their products and/or services contribute to the environmental goals of a green economy."

The green start-ups that participated in the survey were 2.5 years old on average. Around half said they are in the “start-up stage,” meaning they have developed a market-ready offer and are recording their first sales or users. Around a quarter put themselves in the “seed stage” without sales or users, and another quarter in the “growth stage” with strong increases in sales or users. Among 100 green start-ups, only three are in a later stage of development, according to the survey. The following graph summarises the other key results of the survey. 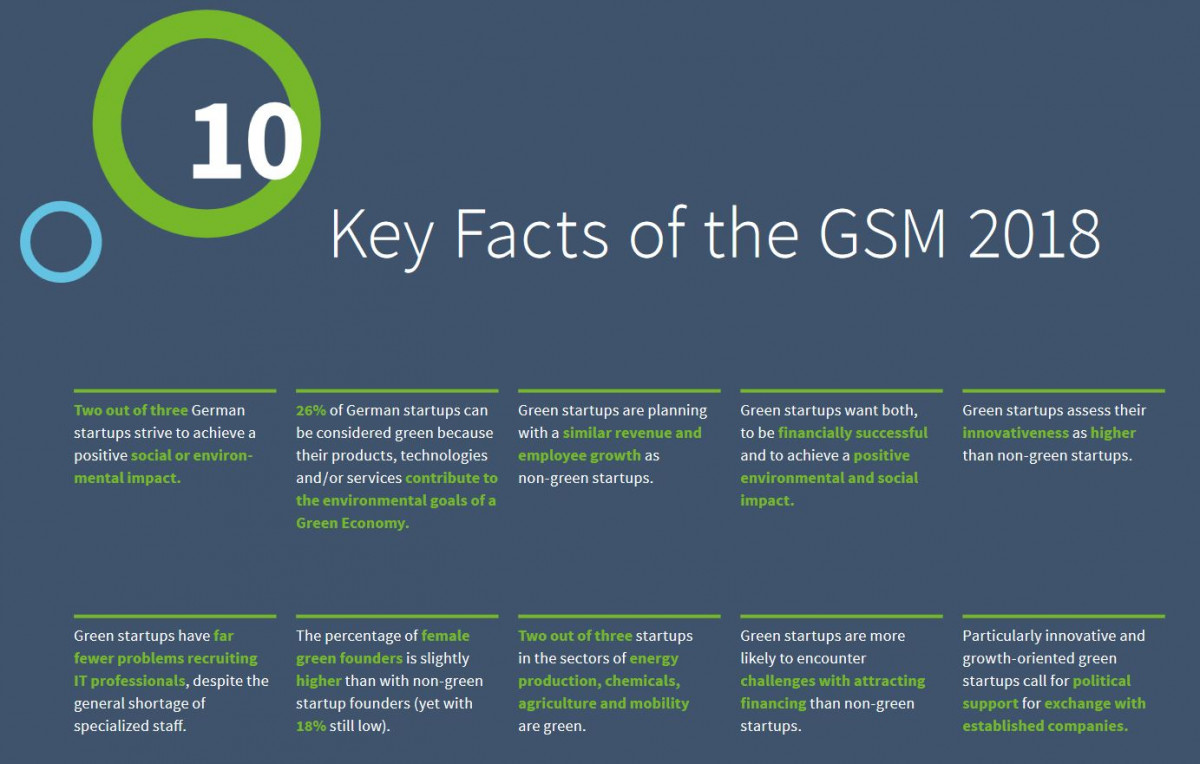 What do green start-ups focus on?

Around one in five (19%) green start-ups say they are active in the IT sector, 9 percent assign themselves to the food sector, 8 percent to the energy sector, 7 percent to consumer goods, 5 percent to textiles, and 4 percent to transport and construction. 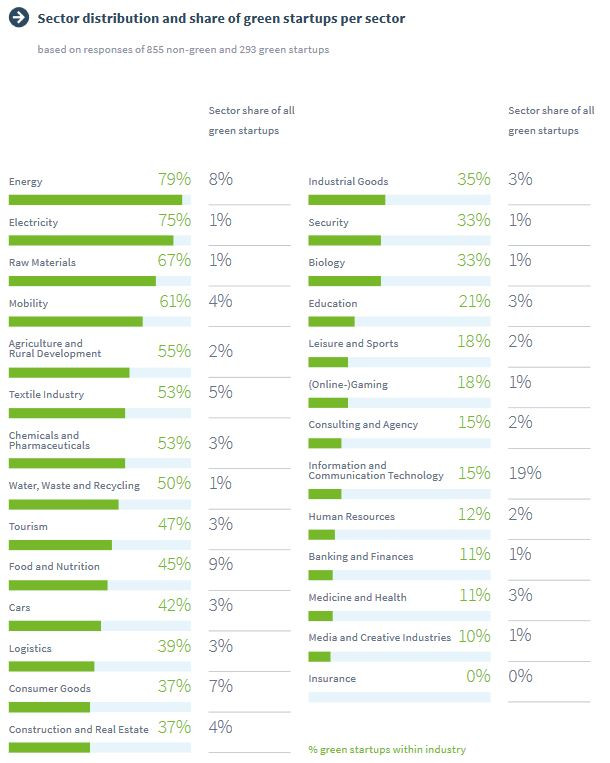 Less than one in five green start-ups is founded by a woman. "Female founders are clearly underrepresented in the German start-up scene," the report states.

Around half of green start-ups say they profit from interactions with other start-ups, and almost two-thirds from cooperation with established companies.

Where does the money come from?

A select few German green start-ups have concluded spectacular finance deals in the last couple of years, even if volumes remain small when compared to some Silicon Valley deals. The following list shows Germany's top ten "Green Deals" of 2017 and 2018. A regularly updated list can be found here.

But deals of that magnitude remain an exception. The following graph shows that the bulk of green start-ups rely on other small-scale sources of capital. Their most important capital sources are savings (84%), family and friends (40%), state subsidies (35%), followed by business angels (20%) and bank loans (18%). 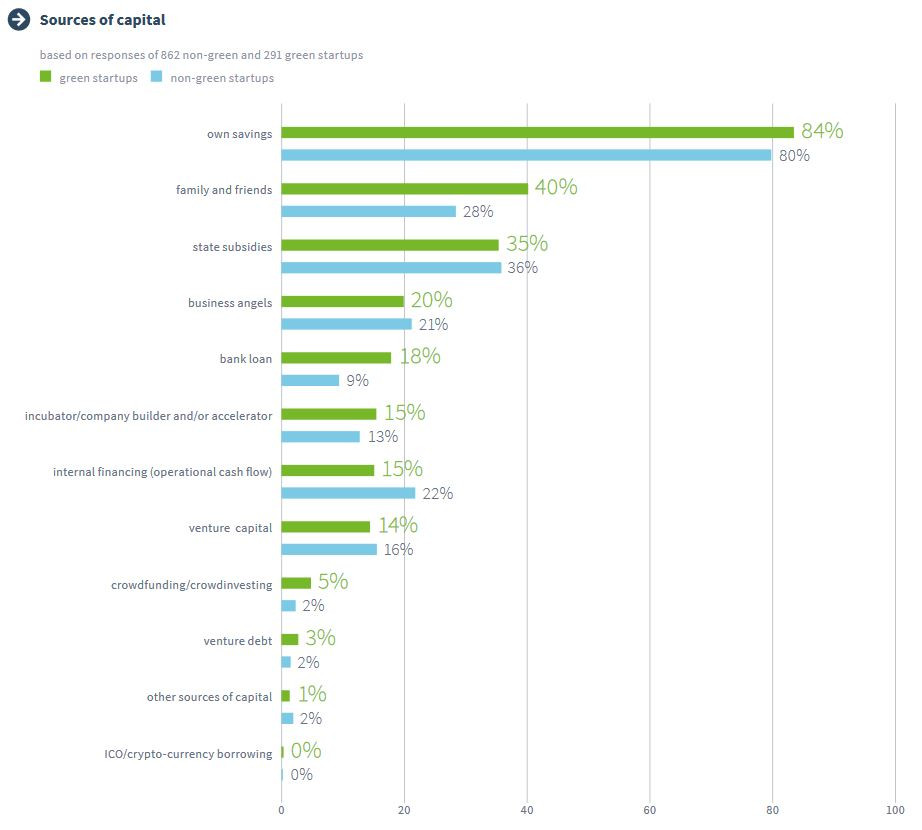 Table:Borderstep
All texts created by the Clean Energy Wire are available under a “Creative Commons Attribution 4.0 International Licence (CC BY 4.0)” . They can be copied, shared and made publicly accessible by users so long as they give appropriate credit, provide a link to the license, and indicate if changes were made.
Dossiers
This Factsheet is part of the following Dossiers: