Germany’s Federal Court of Auditors (BRH) has renewed its criticism of the government’s lacking overview of energy transition costs, a court spokesperson told the Clean Energy Wire. Website Spiegel Online originally reported that the court asked the German economy ministry (BMWi) several times to provide a detailed description of expenses arising from the renewables levy, grid fees, staffing in administrations, lost revenue due to tax rebates, and other Energiewende factors. At the end of 2016, the BRH already used an advisory report to state that the government’s controlling and coordination of Energiewende costs is insufficient and omits “fundamental questions”. Spiegel Online writes that the BMWi reported the renewables levy’s costs, which customers pay with their power bill, to the BRH in March. But the court says the ministry still lacks a concept on how the effectivity of support policies can be assessed. The BRH’s spokesperson told the Clean Energy Wire that the parliament’s budget committee will now review the ministry’s report.

Find background in the CLEW dossier The next German government and the energy transition.

The new head of Germany’s VW, Herbert Diess, “will consistently steer the largest car company in the world towards e-mobility”, Martin Seiwert writes on euractiv.de. Diess’s commitment to e-cars “is an affair of the heart for him”, Seiwert says, arguing that Diess had proven this during his time at VW’s competitor BMW. He writes that Diess could become a trailblazer for e-cars like Tesla CEO Elon Musk if he follows through with his promises. While Musk made e-mobility a priority for large carmakers, Diess “could play the important role of pulling e-cars out of the luxury segment and make them available for the masses”.

German electric air taxi startup Volocopter has presented a concept for the inner-city infrastructure needed to transport thousands of passengers with its autonomous and emission-free drones that take off vertically. “The vision integrates air taxis into existing transportation systems and provides additional mobility for up to 10,000 passengers per day with a single point to point connection,” according to the company press release. 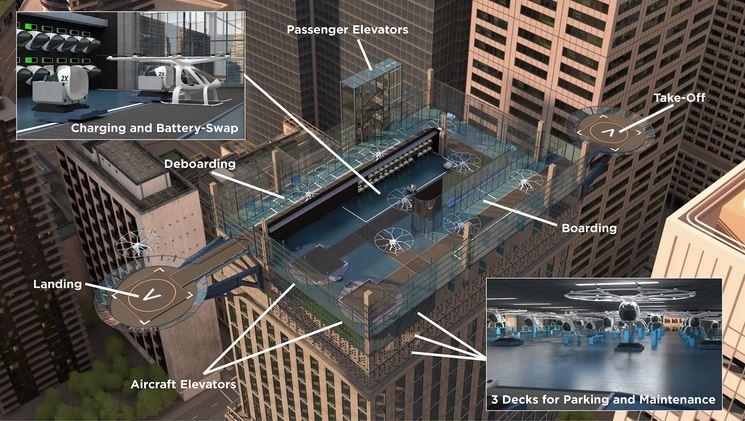 If future power needs are around 600 terawatt-hours, Germany would need 97 gigawatt (GW) of onshore wind, 25-35 GW offshore wind and 102 GW solar PV capacity, Schleswig-Holstein’s energy transition minister and head of the federal Green Party Robert Habeck told a wind power trade fair in Husum, Brigitta von Gyldenfeldt reports for Welt online. This means renewables development would have to be accelerated dramatically and across state borders, Habeck said. “Politicians also have to defend the unpleasant details of the energy transition,” he said, referring to the necessary expansion of the power grid which is often opposed by citizens.

Read a CLEW dossier on the grid expansion here.