E-mobility on verge of breakthrough -report / Police in Hambach Forest

E-mobility, on the verge of breakthrough, might pose challenge to German power distribution grids

Advantageous regulations, decreasing overall costs, a wider offer of different models and increased demand mean that e-mobility is on the verge of breakthrough in Germany, according to consultancy McKinsey. Similar to the developments in the solar PV industry, falling battery prices could mean that total costs for electric cars will be lower than those of conventional cars by the mid-2020s, McKinsey writes in a special report for the company’s bi-annual Energiewende-Index report. An increase in e-cars, however, could lead to “massive bottlenecks” in power distribution grids, the authors of the special report write in a separate article for energy magazine Energiewirtschaftliche Tagesfragen.

Strong increase of new car registrations in August, ahead of new emissions test

New car registrations in Germany increased significantly in August 2018 – 25 percent compared to the same month in 2017 – due to the introduction of the stricter Worldwide Harmonised Light Vehicles Test Procedure (WLTP) at the beginning of September, writes the German Association of the Automotive Industry (VDA). The August result cannot be taken at face value because it was due to this one-off effect, said VDA head Bernhard Mattes. The share of petrol cars grew to 62 percent of all new registrations, while the share of diesel cars increased slightly to 33 percent and the share of purely electric cars grew to 0.8 percent, writes the Federal Motor Transport Authority (KBA) in a separate press release. 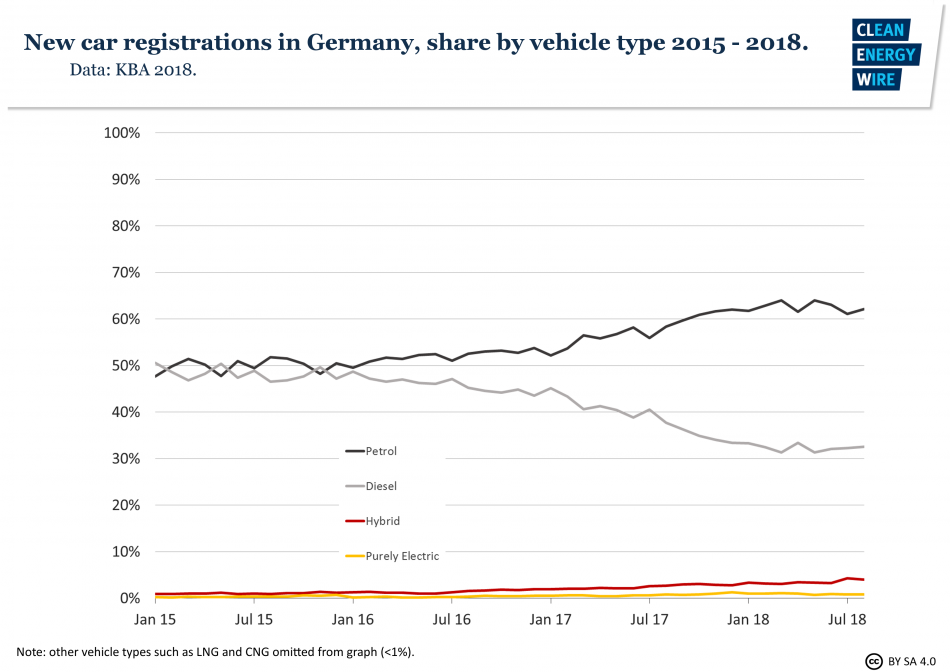 German carmakers are the main culprits behind the problems with emissions, writes Nikolaus Doll in an opinion piece for Die Welt. “Not all, but important companies have lied, deceived and in the end will not manage to comply with the future limit,” Doll writes, referring to the 2021 EU car fleet CO₂ emissions limit. However, the German and EU governments are also at fault, Doll adds. “They regularly introduced new ambitious targets but did not worry about whether and how these were reached.” The federal government has created additional uncertainty by not yet making a decision on hardware retrofitting for older diesel cars, he points out. “Nobody knows what a diesel will be worth in a couple of months and where driving bans loom.”

Local governments have so far focussed on diesel vehicles in their air pollution control plans. However, such plans could also include provisions for power plants and coal mines, writes Thorsten Knuf in Berliner Zeitung, citing a report by the research service of the German federal parliament (Wissenschaftlicher Dienst des Bundestages). Jürgen Resch, managing director of NGO Environmental Action Germany (DUH), told Knuf that power plants contribute to a certain amount of “background pollution” in populated areas, but that the transport sector is the main reason for missed emissions limits in inner cities. The contribution of individual power plants would also be difficult to prove, Resch added.

Police forces in the German federal state of North Rhine-Westphalia (NRW) have moved into the embattled Hambach Forest that energy company RWE wants to cut down to make room for a nearby coal mine, the Rheinische Post reports. On Twitter, police said they were protecting RWE staff who “are removing barricades and cleaning up litter” in the forest in which climate activists have held out for years to prevent the coal mine’s expansion.

However, police said that “no evictions” or removal of the activists’ self-made tree houses were planned. RWE has the right to start clearing the forest by 1 October after it had to halt its activities for one year following a lawsuit by environmental organisations.
Several members of Germany’s coal exit commission have said that the mine expansion should be put on hold until the commission has finished its negotiations over the management of the country’s coal exit. The commission’s leaders, however, maintain that  dealing with the situation at the Hambach Forest is not part of the body’s mandate.

The state government of Brandenburg plans to increasingly regulate what it sees as excessive wind power expansion to ensure the continued acceptance by the population, writes Benjamin Lassiwe in Lausitzer Rundschau. State premier Dietmar Woidke said he wanted to introduce an initiative in the Bundesrat, the council of federal state governments, to abolish “wind power privilege”, a rule stipulating that turbines can be built near municipalities without their consent. The state government also wants to introduce a special levy that wind park operators would have to pay to the affected municipalities in Brandenburg, it said in a press release.

For background, read the CLEW factsheet From ideas to laws – how Energiewende policy is shaped and the dossier Onshore wind power in Germany.

Germany’s farewell to coal: Artists reflect on a dying industry

In Art & Coal, a major exhibition in Germany’s Ruhr region, artists explore the 900-year-old culture of coal mining as the country’s last two mines prepare to close, writes Sunaina Kumar in an article for the online art magazine and blog website Hyperallergic.