Germany’s new economy and energy minister Peter Altmaier has pledged to maximise focus on the extension of the country’s power grid as a priority of his work. “The Energiewende will succeed if we get ahead with the grid extension,” Altmaier told parliament in his first address to the new legislature. “I promise you that after six months in office, I will know every problematic line personally and have visited it.” Altmaier reiterated his opinion that the Energiewende would only succeed if it created successful business opportunities without subsidies. Journalists and opposition politicians were quick to point out that Altmaier failed to mention the Energiewende’s other energy policy questions beyond the grid issue. Overall, Altmaier focused his general statements on the role of small and medium-sized companies – known collectively in Germany as the Mittelstand -- in the country’s social market economy model. “I see the economy ministry as the ministry for the Mittelstand,” he said.

Watch the speech in German here.

See the CLEW dossier The next German government and the energy transition for more information.

Protests continue against Germany’s planned SuedLink power transmission line, the news agency dpa reports in an article carried by Welt Online. Guntram Ziepel of the national association of citizen initiatives against SuedLink says his organisation “completely rejects the transmission line the way it is currently planned.” The association argues that SuedLink, which is meant to transfer power generated in Germany’s windy north to industrial centres in the south over hundreds of kilometres, has not been properly thought through as more wind turbines and the expected rise in the number of e-cars are set to alter the country’s energy supply and demand pattern. The protesters, who will meet in the central German town of Fulda over the weekend, prefer small and decentralised grid structures that use power produced near where it is used, the article says.
SuedLink is part of Germany’s effort to overhaul its grid capacities to cope with the rising number of intermittent renewable energy sources, a task the new economy and energy minister, Peter Altmaier, has identified as a “top priority.”

Germany’s wind power sector employed about five times more people than the country’s coal industry in 2016, the website strom-report.de reports. About 160,000 people worked in onshore and offshore wind power in that year, compared to roughly 31,000 in the hard coal and lignite industry, the article says. About 27,200 people were employed in Germany’s offshore wind industry, while the onshore sector provided 133,000 jobs. By contrast, around 19,400 people worked in the lignite and 11,500 in the hard coal industries. According to the website, employment in the coal industry shrunk by over 100,000 jobs since the year 2000, whereas employment in the wind industry has more than tripled over the same period. With a share of 47 percent in total employment in Germany’s renewable energy sector, wind power was by far the most important employer.

Read a CLEW factsheet on onshore wind power business in Germany here and on the coal industry here. 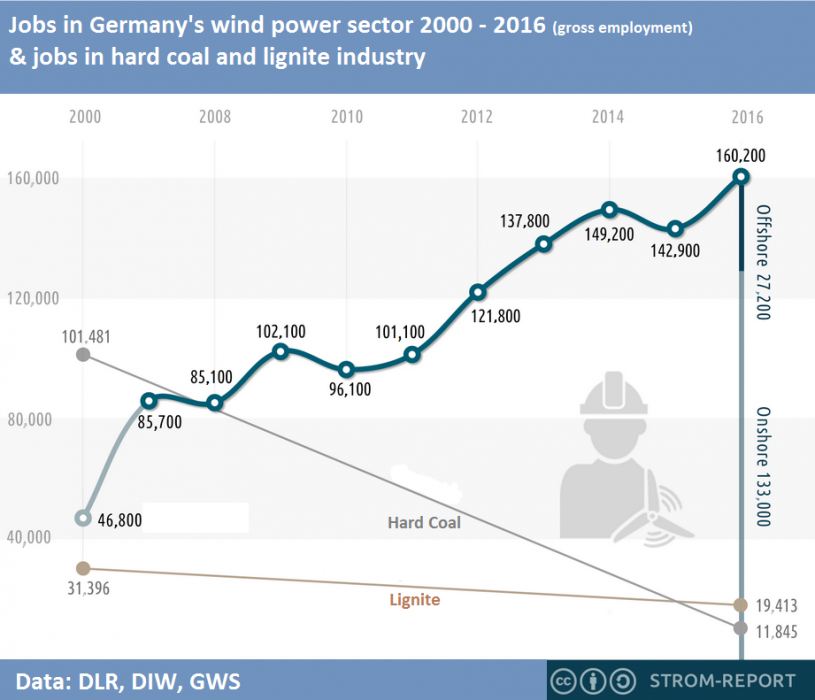 The International Energy Agency (IEA) has grossly underestimated the growth of renewables in its influential World Energy Outlook (WEO) forecasts for political reasons in the past, green energy proponents have told the Deutsche Welle. “Fossil and nuclear industries are interested in artificially pushing up the estimates of renewables’ costs in order to influence policy in their favour,” Claudia Kemfert, head of the Department of Energy, Transportation and Environment at the German Institute for Economic Research (DIW), told the author, Gero Rueter. IPCC advisor Sven Teske, director at the Institute for Sustainable Futures at the University of Technology Sydney, said he had learned unofficially that the IEA was told how much nuclear energy should be included in the WEOs. The IEA told Deutsche Welle that the calculations contained in the WEO reports were scenarios, not forecasts.

Interest in concluding green power contracts is waning in Germany, Ralf Geißler writes on the website of public broadcaster MDR. Power contracts with a ’green tariff‘ that finances renewable power sources were most popular in the wake of the 2011 Fukushima nuclear disaster, when suppliers experienced “a real boom,” Geißler writes. But according to Lundquist Neubauer of the price comparison website Verivox, many customers have realised “that they finance the energy transition also without a green tariff” through their renewables surcharge. According to Franziska Maul of the municipal utilities of Erfurt, demand remains significant for green contracts, “but the curve has levelled off.” Simone Peter, head of the German Renewable Energy Federation, says that a lack of transparency in the use of the funds generated with green tariffs makes customers reluctant to commit.

Orders for new Audi cars suggest that the decline in diesel sales is coming to an end, according to company CEO Rupert Stadler. “We can see in our order book that diesel sales stabilise, and in some countries they even increase,” Stadler told Die Welt. Stadler said he is confident his company will stay below the EU fleet emission limits thanks to the diesel and hybrid engines, and added that his company will continue to invest in diesel technology. “My position is clear: the diesel has a future. It might no longer play a major role in smaller cars in the longer term. But if clients want to drive more SUVs, we will need it even more because of its lower CO2 emissions.”

Utility EnBW says it has achieved a “financial turnaround” by "increasing its operating result for the first time since 2010". CEO Frank Mastiaux called the 2017 result a “milestone in our company’s transformation.”

See the CLEW dossier on Utilities and the energy transition here.