E.ON could lose out on local grids in innogy deal - report

E.ON’s interest in competitor RWE’s renewables spin-off innogy is also triggered by innogy’s 4,000-odd existing contracts with municipalities, which grant the latter company the right to operate local grids, or give it a stake in local utilities, writes Jürgen Flauger in Handelsblatt. Once finalised, the deal between the two German energy companies, however, could give municipalities the right to terminate the contracts early, writes Flauger. ’Change of control‘ provisions were common in such contracts, and several cities had already begun to evaluate their options.

The proposed major asset swap deal between German power companies E.ON and RWE could lead to the reevaluation of innogy’s bonds, leaving their green credentials “up in the air,” writes Tasos Vossos for Bloomberg.

Germany needs a carbon floor price to reveal the true costs of renewables vis-à-vis other energy sources, the SPD parliamentary group's energy policy coordinator, Johann Saathoff, said at an event organised by the offshore wind power industry association AGOW in Berlin. Saathoff said a common carbon floor price in European countries would reveal that renewable energy sources like offshore wind power are more competitive than fossil and other energy sources. “Most people, and especially some from abroad, say that nuclear is the cheapest form of power generation,” Saathoff said. “But this is only true if you don’t factor in the costs of nuclear waste disposal,” the energy politician said, adding that this would probably make nuclear power the most expensive form of energy generation. “Likewise for coal, which is only cheap because blowing CO2 into the atmosphere is free of charge,” he said, arguing that most forms of renewable power would see substantial cost advantages if CO2 was priced appropriately. The Social Democrat said a carbon floor price would also be needed to get sector coupling - the integration of different sectors - off the ground. “We cannot wait for the [EU Emissions Tranding System] ETS here,” Saathoff said. He added that the debate on a carbon floor price is gaining momentum in German policymaking, and especially within the SPD, which is mirrored by a recent statement by environment minister Svenja Schulze, a Social Democrat, that she was open to a national carbon price.

German container shipping firm Hapag-Lloyd plans to reduce its CO₂ emissions by 20 percent by 2020 compared with 2016 levels. Its aim is to help support a drive to halve emissions in the global shipping industry, reports Reuters. “We have deliberately set a very ambitious goal for ourselves in terms of CO2 emissions because we view sustainability as self-evident, active involvement rather than lip service,” said the company’s Senior Director of Sustainability Management Jörg Erdmann in a press release.

Due to climate change, droughts in Europe will last longer, affect greater areas, and have an impact on more people, according to an article published in Nature Climate Change by an international team of scientists coordinated by the Helmholtz Centre for Environmental Research (UFZ). If global temperature increases by three degrees Celsius, the drought regions in Europe will expand from 13 percent to 26 percent of the total area compared to the reference period of 1971 to 2000, writes the UFZ in a press release. “If efforts are successful in limiting warming to 1.5 degrees Celsius, as stipulated in the Paris Climate Protection Agreement, the drought regions in Europe can be limited to 19 percent of the total area.”

Over one third (35 percent) of companies surveyed by the German Energy Agency (dena) say that Germany’s climate and energy policy targets are not ambitious enough, while especially larger companies (about 37 percent) consider the goals too ambitious. About one third of those surveyed said they used power produced from volatile sources. For large companies, the respective figure is close to 50 percent. dena has surveyed 286 German companies and presented the results by company size. 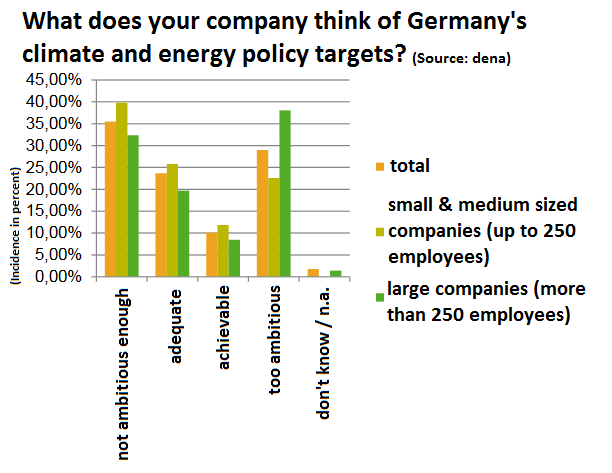 Find the press release in German here, and the results in German in this presentation.

For background, read the CLEW factsheet What business thinks of the energy transition.

IFC, EU and Germany to boost energy efficiency in Ukraine

The International Finance Corporation (IFC), a member of the World Bank Group, has signed an agreement with the European Union and Germany to support the Ukrainian government’s efforts in reducing energy waste and greenhouse gas emissions in the residential sector, IFC said in a press release. A new multi-donor fund (EEF) will be set up to help boost energy efficiency in Ukraine. IFC will initially manage up to 53 million euros of funding from the EU (43 million euros) and Germany (10 million euros). German environment minister Svenja Schulze said that “the establishment of the EEF will support Ukraine in transforming energy subsidies to investments and reducing pressure on the public budget.”