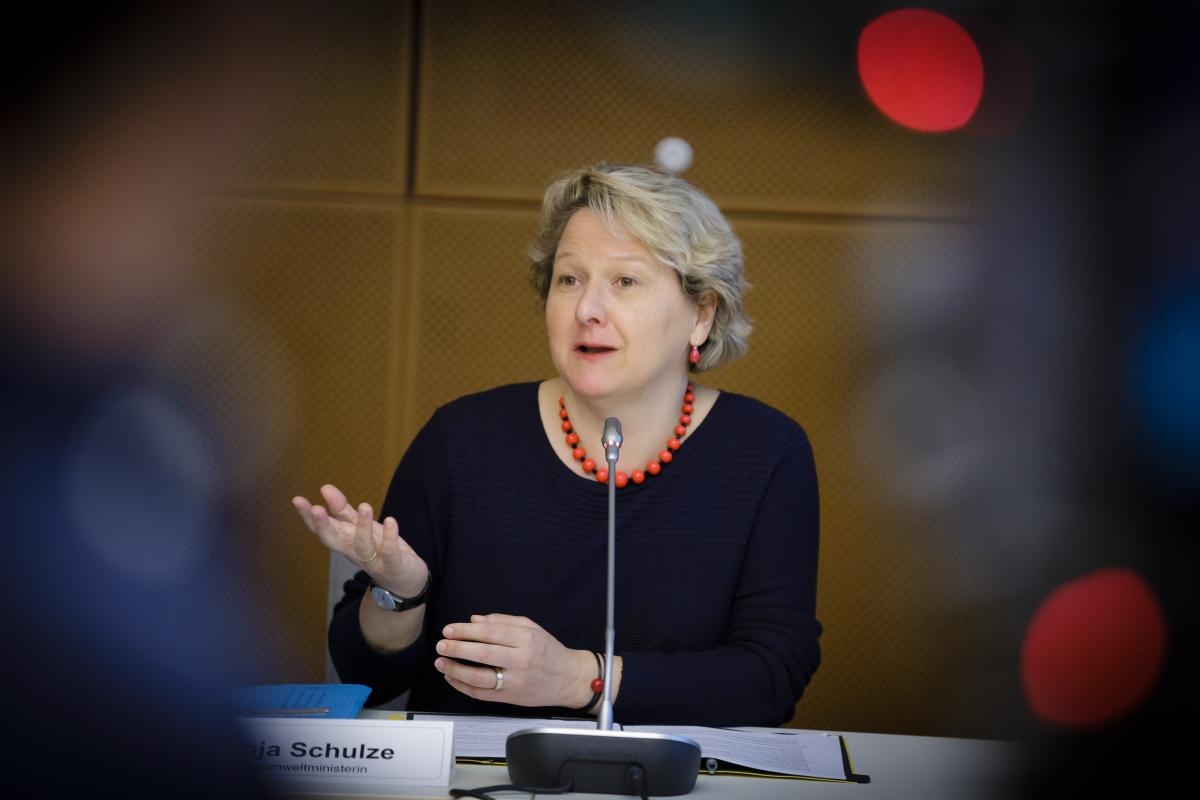 Schulze says a CO2 price should not mean too much additional costs for German citizens. Photo: BMU
Germany’s new environment minister, Svenja Schulze, has indicated support for a national price on carbon emissions. The Social Democrat said in an interview the idea that Germany improves its emissions reduction by putting a price tag on CO2 is “plausible,” but added that this could only be done if citizens do not have to put up with additional costs. The government recently stated that carbon prices in general are an effective tool, but that the existing European Union Emissions Trading System is sufficient to reach the climate targets – even though it does not cover all relevant sectors. [UPDATES Quotes from Schulze’s interview; government position on CO2 pricing]

German Environment Minister Svenja Schulze said a price on CO2 emissions would be an option for Germany to lower its emissions in the framework of its Climate Action Plan 2050. “I find the idea very plausible,” Schulze told the daily energy and climate newsletter Tagesspiegel Background in an interview. The minister said Germany’s coalition parties - Chancellor Angela Merkel’s conservative CDU/CSU alliance and Schulze’s Social Democrats (SPD) - had agreed to assess the effects of carbon pricing as an instrument for controlling emissions under the Climate Action Plan agreed in 2016.

Schulze, who in her maiden speech in parliament called on Germany’s decision makers to re-take the lead in international climate action, said that the current climate targets around the world are “likely” not enough to keep global warming below two degrees Celsius, as stipulated in the Paris Climate Agreement. “The international community will have to up the ante. This includes Europe,” Schulze told Tagesspiegel Background.

While emissions in the energy sector in Germany have generally been falling in recent years, they are on the rise in other sectors, especially in transport. A carbon price could be an effective tool for steering emissions in the desired direction, Schulze said, adding that CO2 pricing schemes must be “socially innovative and must come with financial reliefs elsewhere” to ensure that people with low income are not overburdened by additional costs. Countries like Sweden have demonstrated that this is possible, Schulze said.

Schulze’s Social Democrats had briefly flirted with a national carbon price when drawing up their election programme ahead of last year’s federal elections, but opted instead for a call for strengthening the EU’s Emissions Trading System (ETS). The minister admitted that other members of the governing coalition were not too keen on the idea.

Sources close to the coalition negotiations had told the Clean Energy Wire that things could change after the state elections in Bavaria in October. The CSU, the Bavarian sister party of Merkel’s CDU, is under pressure to deliver after scoring its worst result since the 1949 federal elections. Higher prices at gas stations or higher heating bills associated with a CO2 price, however, could carry the risk of lowering the party’s popularity.

The German government’s position is that while a CO2 price “can generally lead to a cost-efficient reduction of emissions,” it has no intention of joining any existing European CO2 pricing systems other than the EU’s ETS. In an answer to a parliamentary inquiry submitted by the Green Party, the government said that the carbon pricing schemes used in other countries, such as the UK, would not be applicable in Germany due to “the respective national circumstances” of power production and demand.

The government added that the reformed ETS is likely to lead to higher carbon prices after 2021. Higher prices for CO2 emission certificates would be sufficient “to lead to the intended emissions reduction,” the government said. It also argued that an “implicit” carbon price already exists in the form of different taxes, levies, and surcharges on fossil fuels.

However, while it is true that most of Germany’s emissions from power generation and industrial production are covered by the ETS, the same does not hold true for emissions from other sectors. In January 2018, an environment ministry paper suggested that Germany might have to buy emissions allowances from other countries to compensate for breaching EU targets in non-ETS sectors. The SPD’s energy policy spokesman in parliament, Bernd Westphal, had indicated that the governing parties would have to come up with some form of taxation of greenhouse gases in sectors not covered by the ETS.

Westphal also said that pricing carbon emissions could be a way to replace the current form of renewables financing. Most observers from across the political spectrum agree that Germany needs a different scheme to raise funds to finance its Energiewende – its dual shift from nuclear and fossil fuel-fired power generation to a climate-friendly energy supply using renewable sources – as the current method of drawing exclusively on the price of electricity impedes what many experts regard as the necessary electrification of transport and heating.

Germany’s new coalition government is now under pressure to set out a clear path to meet the country’s 2030 emissions reduction goal in its first ever federal climate protection law, after it had disappointed the global climate community by all but giving up on its 2020 target. The coalition treaty calls for a global carbon price that at least encompasses the G20 group of leading industrialised and emerging economies, and in its answer to the Green Party, the government has confirmed that it will work towards the goal of implementing a carbon pricing mechanism in the 20-nation club.