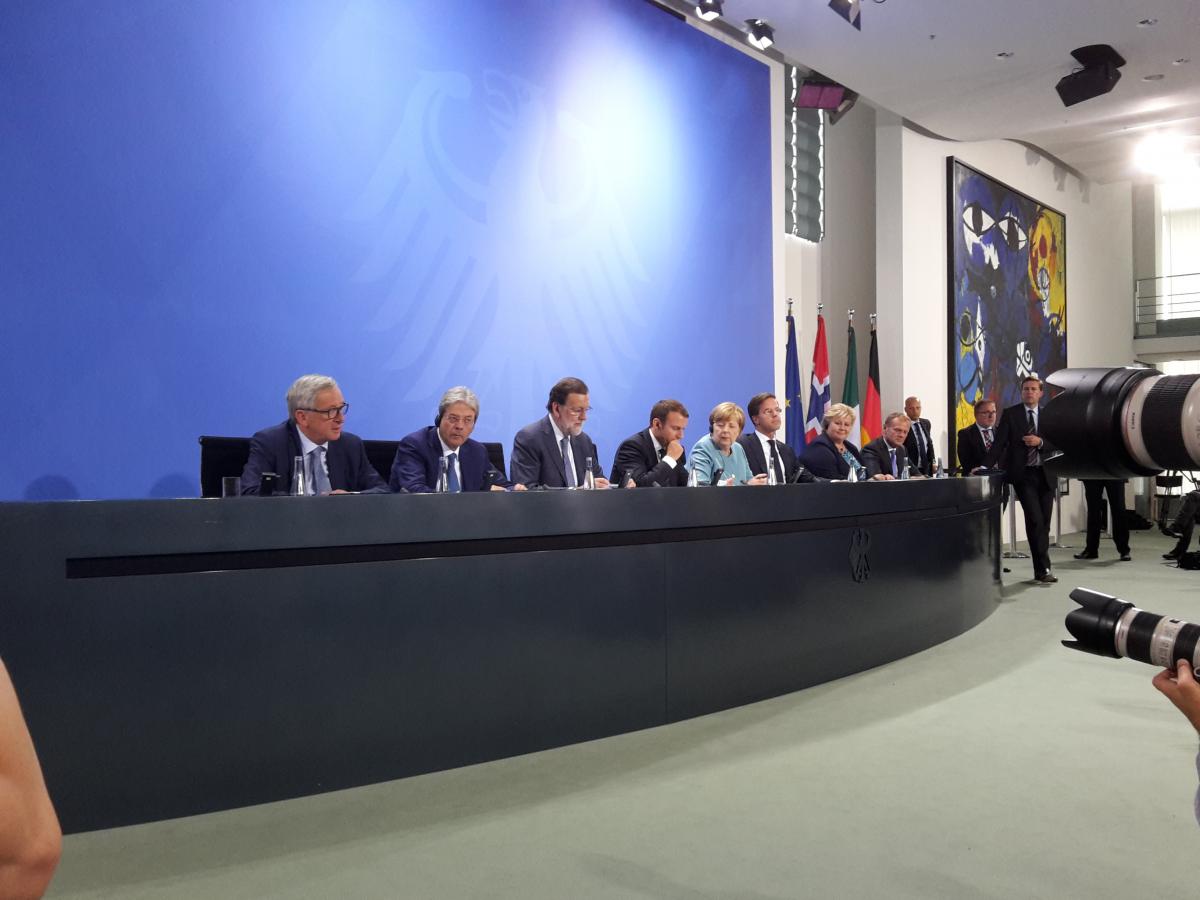 EU leaders at a G20 preparatory meeting in the German chancellery. Source - CLEW 2017.
European Union leaders have underscored their commitment to work towards a joint solution on climate issues at the G20 summit in Hamburg. German Chancellor Angela Merkel said it would not be easy regarding questions such as climate protections. The US position on climate policy and President Donald Trump’s decision to pull the country out of the Paris Agreement has cast doubt over an originally-planned G20 climate and energy action plan. Germany and other nations are also under increased pressure to take the lead.

“On the one hand, we’re working towards stating our position, but on the other hand, we want to find joint solutions, even if we know that to be not so easy on some topics, such as climate. But this was the spirit in which we discussed here today,” said Merkel during a joint press conference after a pre-G20 meeting in the German chancellery.

Over the past months, the German Chancellor has been the focal point of calls by foreign governments and NGOs to push the Group of Twenty on climate protection. European leaders who will be present at the G20 summit in Hamburg on 7 and 8 July backed Merkel at the preparatory meeting in Berlin.

French President Emmanuel Macron said today that the G20 outcome on climate depended on the leadership of Merkel and “we will support her in her endeavours”. He added: “It’s not leading us anywhere if we isolate a country.”

Earlier in the day, Merkel had told the German federal parliament that she would “not whitewash” the climate protection dissent with the United States government. She said in a government declaration that she was determined to lead the climate negotiations at the G20 summit in Hamburg “in a way that they serve the content and goal of the Paris Agreement”.

Germany this year holds the G20 presidency and made climate a priority for the summit. It had hoped to create a joint G20 action plan on climate and energy, as well as a strong statement on the commitment to the Paris Climate Agreement for the Hamburg communiqué. After Donald Trump’s decision to pull out of the Paris Climate Agreement, finding common ground has become more difficult.