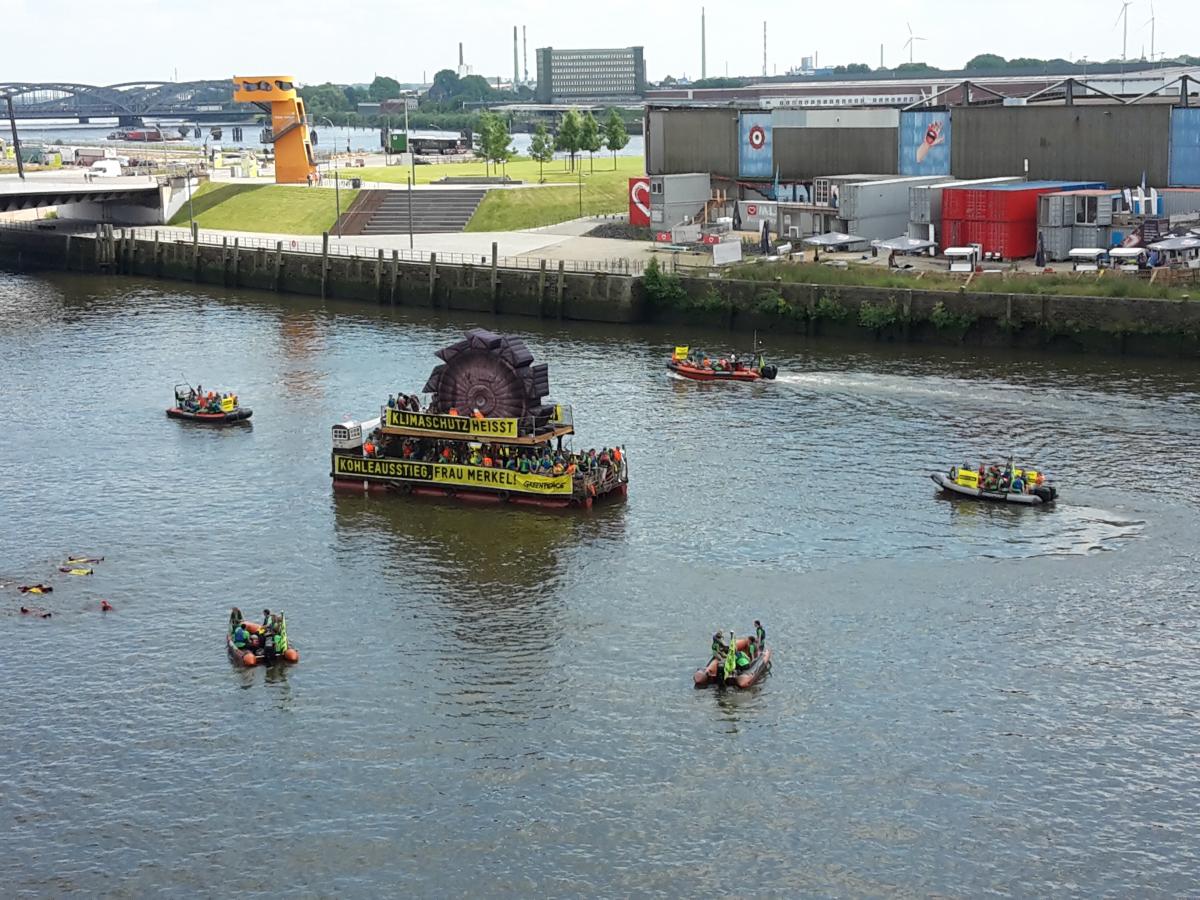 Greenpeace G20 protest on the Elbe River in Hamburg at the C20 summit. Source - CLEW 2017.
NGOs from all over the world have called on German Chancellor Angela Merkel to fight for a strong stance on climate at the G20 summit in little more than two weeks. Merkel said the US decision to leave the Paris Climate Agreement “broke her heart” and predicted “difficult negotiations” at the Hamburg meeting. Putting a spotlight on Germany’s mixed climate record, Greenpeace activists called on Merkel to exit coal.

Setting the scene for the G20 summit, more than 300 civil society organisations from all over the world descended on the northern city of Hamburg to hand Chancellor Merkel a list of their demands for the world’s 20 largest economies.

They urged the G20 to no longer treat “the environment, oceans and the atmosphere as though they were limitless sinks for pollution and greenhouse gases,” as part of “a radical transformation of the present neoliberal economic system.”

The C20 call for phasing out fossil fuel subsidies, setting effective and fair carbon price signals and “sticking to the promises” to ramp up climate financing. The communiqué is a condensed version of C20 policy recommendations to the G20 from March.

“We will not be able to fulfil everything you envisage,” Merkel told the NGOs in a crowded university lecture hall. “But things will hopefully progress again step-by-step this time. Above all, we must not go backwards.”

Germany this year holds the G20 presidency and wants to make climate protection a priority at the summit. After US President Donald Trump’s decision to pull out of the Paris Climate Agreement, negotiations have become more difficult and the German government has been trying to close the ranks of the remaining G19.

At the civil society meeting in Hamburg, the chancellor again expressed her regret about the new US administration’s stance. “It breaks one’s heart” to see someone pull out “just like that,” said Merkel and emphasised that she had spent all her life negotiating international climate agreements.

Yet, the US remained “an important part of the G20” and would receive “a warm welcome, also from the German government,” said Merkel. 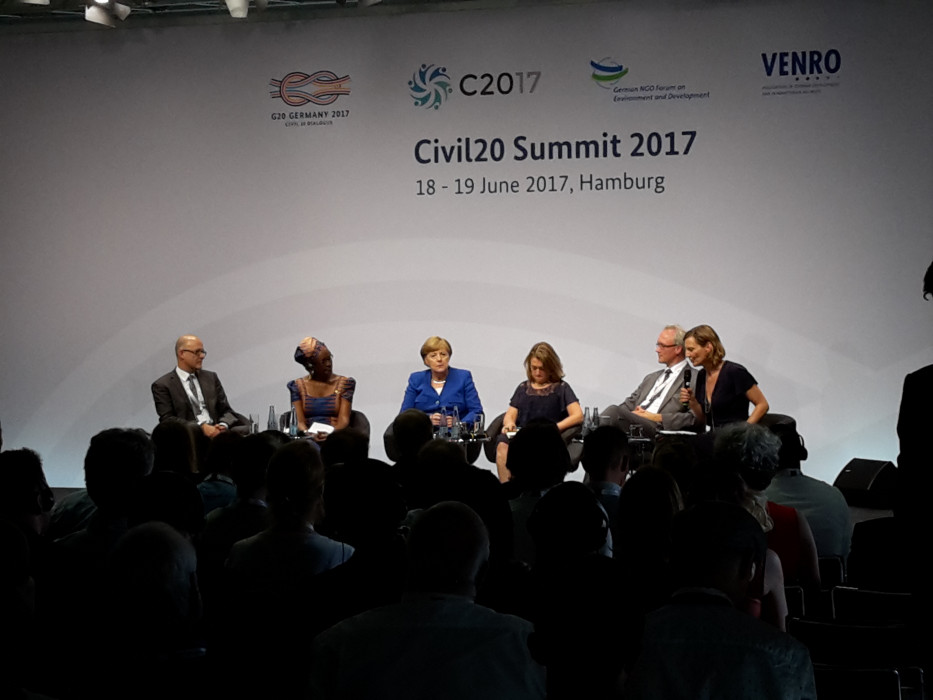 Negotiations at the summit in July would be “difficult,” Merkel said. “There will be no communiqué unless everybody approves. But I don’t want to pre-empt the negotiations. Our Sherpas [government negotiators] are working hard. But still – it remains a regrettable thing,“ said Merkel. The Paris Climate Agreement and the Agenda 2030 for Sustainable Development “now more than ever” showed the right path to a low-carbon economy.

Government representatives in recent weeks said that bringing all G20 leaders to the table in Hamburg continued to be important, even with a consensus on climate by all seeming increasingly unlikely, as shown by the outcomes of the G7 summit in May and the G7 environment minister meeting in June. In both instances, all members except the United States reaffirmed their commitment to the Paris Agreement in the final communiqué, while the US opted out from the relevant provisions.

The German presidency had initiated a G20 action plan on climate and energy earlier this year, which it hopes to present at the summit in Hamburg. It remains to be seen if it can be part of the final communiqué.

Much applause for “climate chancellor” Merkel

This was evident as a group of Greenpeace activists hung a banner from the side of a raft on the Elbe River, stating, “Climate protection means coal exit, Ms Merkel,” just as she arrived at the summit venue on the riverbank. Germany is on track to miss its own 2020 climate targets.

“If Merkel wants to counter the backward-looking energy policy by Trump, there’s no way around a coal exit,” said Greenpeace Germany in a press release.

Yet, Merkel – who has been dubbed the “climate chancellor” – received much applause at the summit in Hamburg. That’s because internationally, she remains highly regarded among climate activists, says Spielmans. “Compared to other heads of government, she appears as a shining light.”

[Find more information in the CLEW factsheet The story of "Climate Chancellor" Angela Merkel and the interview with Greenpeace head Jennifer Morgan.]