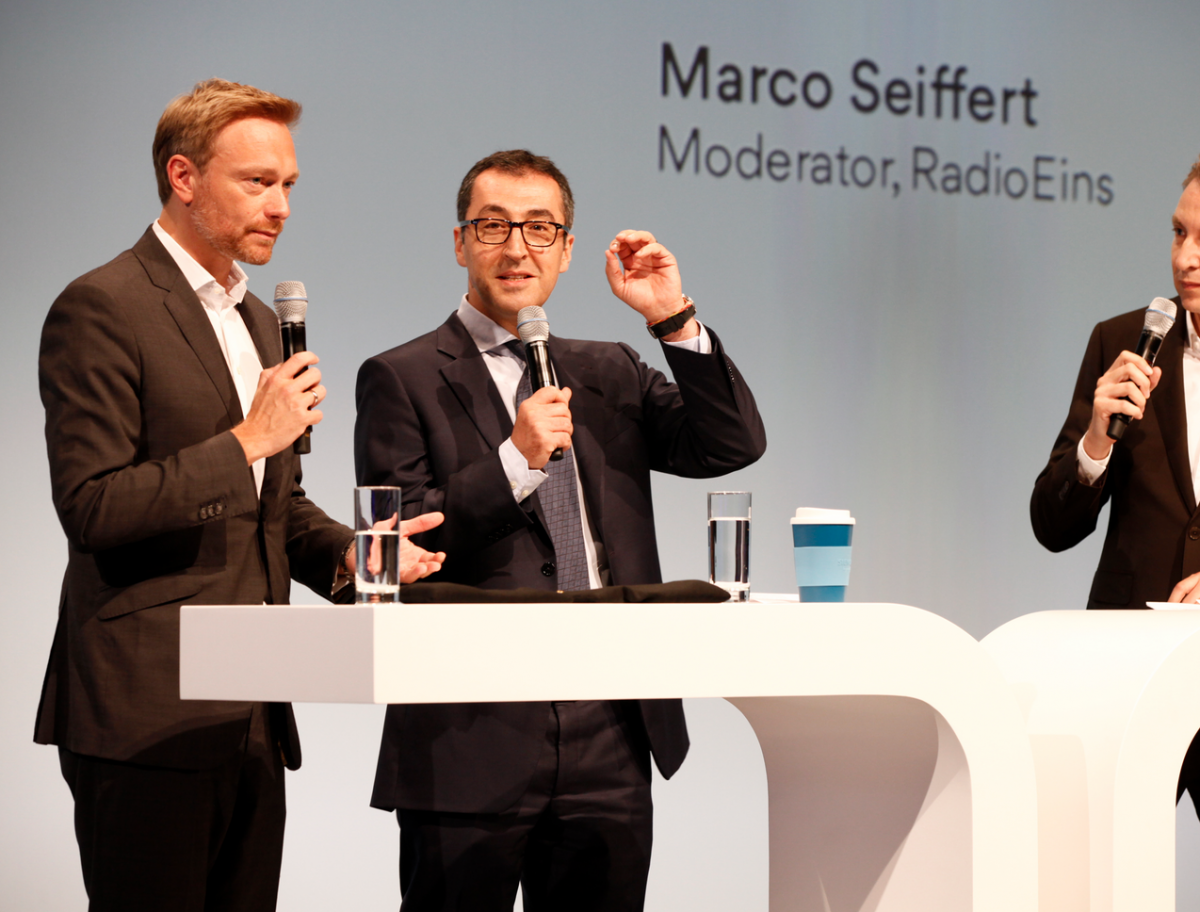 Lindner (left) and Özdemir (centre) debating in Berlin. Photo: BDEW
The leading candidates of the two smaller yet influential German political parties sparred at a utilities conference in Berlin over major energy policy issues, such as the exit from coal-fired power generation and a national versus a European approach to policymaking. Both parties could potentially be junior government coalition partners after the German federal elections in September. Green Party leading candidate Cem Özdemir and his Free Democrat counterpart Christian Lindner debated energy policy for the first time as the election campaigns get now going, confirming differences in a lively and at times witty exchange.

The head of the resurgent Free Democrats (FDP), Christian Lindner, and Cem Özdemir, leading candidate of the Green Party, which has dipped in public polls recently, both underscored their parties’ general commitment to the Paris Climate Agreement and the country’s Energiewende, the dual move to phase-out nuclear power and shift the energy system from fossil fuels to renewable sources. Yet their first discussion shed light on different approaches and priorities.

Özdemir stressed in the discussion at utility association BDEW’s annual conference his party’s resolve to exit coal-fired power generation by 2030 and to switch off the 20 dirtiest coal plants during the 2017-2021 legislative period. However, he dodged a clear answer when pressed by the moderator as to whether the timing of a coal exit would be a red line in any coalition talks.

Lindner underscored the business-friendly FDP’s plans to focus on the European Emissions Trading System (ETS) as the tool to reduce carbon emissions. A market-based approach was more promising, while a full exit from fossil fuels or an end to combustion engines for cars, which is part of the Greens’ programme, would not be feasible by 2030, he said.

Lindner said the ETS should be the market-based instrument of choice to cut carbon emissions and national targets for emissions reductions were unhelpful. Germany should also focus on energy efficiency and “low hanging” fruit to help cut emissions, especially in the heating sector.

After four years of a grand coalition of Angela Merkel’s Christian Democrats (CDU), their Bavarian sister party CSU and the Social Democrats (SPD), German parties have moved into campaign mode for September’s elections. None of the five main established parties (including the Left Party) questions the Energiewende or the need for climate protection, but they differ on priorities and pathways. After gains in state elections over the past two years, the anti-Energiewende, right-wing populist AfD could make the five-percent threshold to enter parliament this year.

Lindner’s call for a more market-based approach drew some applause from the business leaders. Many noted the generally friendly and joking tone between the two politicians. But climate and energy policy analysts were quick to point out the crunch points.

“Despite great chemistry between the discussants it was clear that there are fundamental differences on climate and energy between the two parties,” E3G analyst Julian Schwartzkopff said. Lindner called Germany’s climate targets unrealistic, stressing that lignite would still be necessary in 2030 and putting economic efficiency above all else, he said. Özdemir, meanwhile, urged an accelerated coal phase-out. “Still, it was notable that both were open to a “Jamaica” coalition after the September elections, which would certainly make for interesting coalition talks if they are anything like this debate,” Schwartzkopff said. A coalition of Conservatives, Free Democrats and Greens is called “Jamaica” in reference to the country’s black, yellow and green flag, which matches the three parties’ traditional colours.

German governments are usually formed by coalitions, as its representative voting system makes single-party majorities in parliament rare. When forming a coalition, parties often have to make compromises on their programmes and pledges made during the election campaign. The rise of parties on the left and the right has brought about grand coalitions of the two largest parliamentary groups – CDU/CSU and SPD, while several federal states are now governed by three-party coalitions. Polls indicate that the federal parliament will be made up of six parties after September’s elections.

Chancellor Merkel’s CDU has recently regained a strong lead in opinion polls, and the resurgence of the FDP has increased chances for a centre-right coalition. The two parties last shared power between 2009 and 2013. During that time, the nuclear accident in Fukushima, Japan, led to one of the most spectacular political u-turns in Germany’s political history, when Merkel re-instated and accelerated the nuclear phase-out in 2011.

The two parties clinched a narrow surprise victory in May elections in Germany’s largest state, North Rhine-Westphalia, a traditional social-democratic stronghold, forming a government with a majority of one vote in parliament. In the northern state of Schleswig-Holstein meanwhile, the conservatives formed a coalition with the FDP and the Green party, the second-ever Jamaica coalition on state level.

Özdemir pointed to the different approaches to energy and climate policy in the two recent state coalition agreements, quipping it showed that “it’s good for the FDP when they have people at their side who know something about energy policy.”

Both candidates also traded some barbs over each other’s previous policy record. Özdemir reminded the audience of the hasty u-turn on nuclear power during the last FDP stint in government. Lindner in turn brought up former Green environment minister Jürgen Trittin’s oft-quoted assessment that the Energiewende would not cost a household more than a scoop of ice cream per month.

The two politicians made no direct reference to the speech of chancellery chief Peter Altmaier, who told the audience the next government had to make sure that support for renewables would not drive power prices higher. Small- and medium-sized companies needed greater certainty about future electricity costs, he said, while the price of electricity would have to be competitive with oil and gas if power was to play a larger role in heating and mobility, as part of the effort to cut carbon emissions.