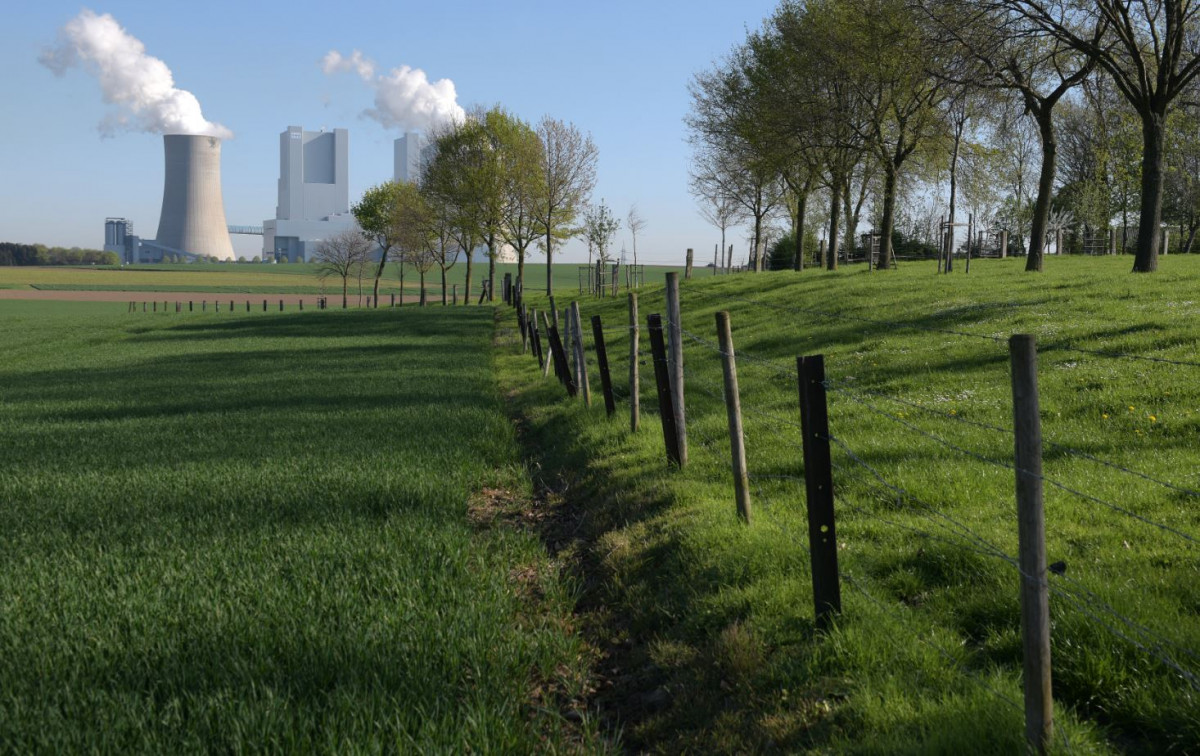 The German coal exit commission's compromise reached in early 2019 was hailed as a breakthrough for cooperation between industry representatives, policymakers and environmental groups, as it outlined how to phase-out the fossil fuel in the country by 2038. However, former commission members now say that a roadmap for the exit's exact implementation that the government, mining states and plant operators agreed on one year later clearly violates the coal compromise and demand that the plan is adjusted to bring about quicker emissions reduction and comply with the country's climate targets. [UPDATES statement by economy minister Altmaier]

Former members of Germany's coal exit commission have accused the government of "clearly and single-handedly" revoking the compromise that was found last year on ending the fossil fuel's use in the country. Following the agreement on a concrete phase-out roadmap between the government, the federal states and plant operators reached on 16 January, former commission co-leader Barbara Praetorius, climate researcher Hans Joachim Schellnhuber and representatives of all environmental NGOs involved in the commission sent a letter to chancellor Angela Merkel saying the compromise that had so far enjoyed their backing would be void if no changes are made to the agreed roadmap.

At a press conference held by the group of dissatisfied former commission members, Praetorius said the roadmap "considerably" deviates from the commission's recommendations and will fail to bring about the necessary emissions reduction to comply with the Paris Climate Agreement's targets. Their main points of critique are that there will be no continuous and linear shutdown of lignite plants. Most capacity to be taken off the grid in the 2020s will only be shut down in 2028/29.

Kai Niebert of the environmentalist umbrella group Deutscher Naturschutzring said the NGOs greenlighted the commission's compromise only because it said that plant shutdowns would commence quickly and continue smoothly over the next years. "Now everything will be postponed," Niebert said, adding that he felt "clearly betrayed" by chancellor Merkel and the coal mining state premiers. He argued that other members of the commission consisting of industry representatives, policymakers and environmental and civil society organisations had no reason to complain about the roadmap as most interests that were negotiated during the group's talks had been satisfied "except climate action."

The agreement between the government, the states and plant operators foresees reducing Germany's lignite capacity from about 21 gigawatts (GW) in 2019 to 15 GW by the end of 2022, the year in which the country also closes its last nuclear power plant. In a second round of plant closures, the capacity will be reduced to just under 9 GW between 2025 and 2029. The remaining lignite capacity will then be taken offline in the 2030s and a review procedure will assess whether the exit can be completed by 2035 or only 2038.

Economy minister Peter Altmaier told public broadcaster Deutschlandfunk that while it was true that shutdowns will not happen continuously, the most criticised gap would be that between 2023 and 2025.  "That's when we've just decommissioned all our nuclear power plants. If 9 GW for a secure power supply are mothballed, I believe it's right we first make sure that the energy industry can adapt," Altmaier said, adding that the time would also be needed to make natural gas as a bridge technology economically viable. "We don't want to fill this gap with imports of dirty coal power or nuclear power from other countries." 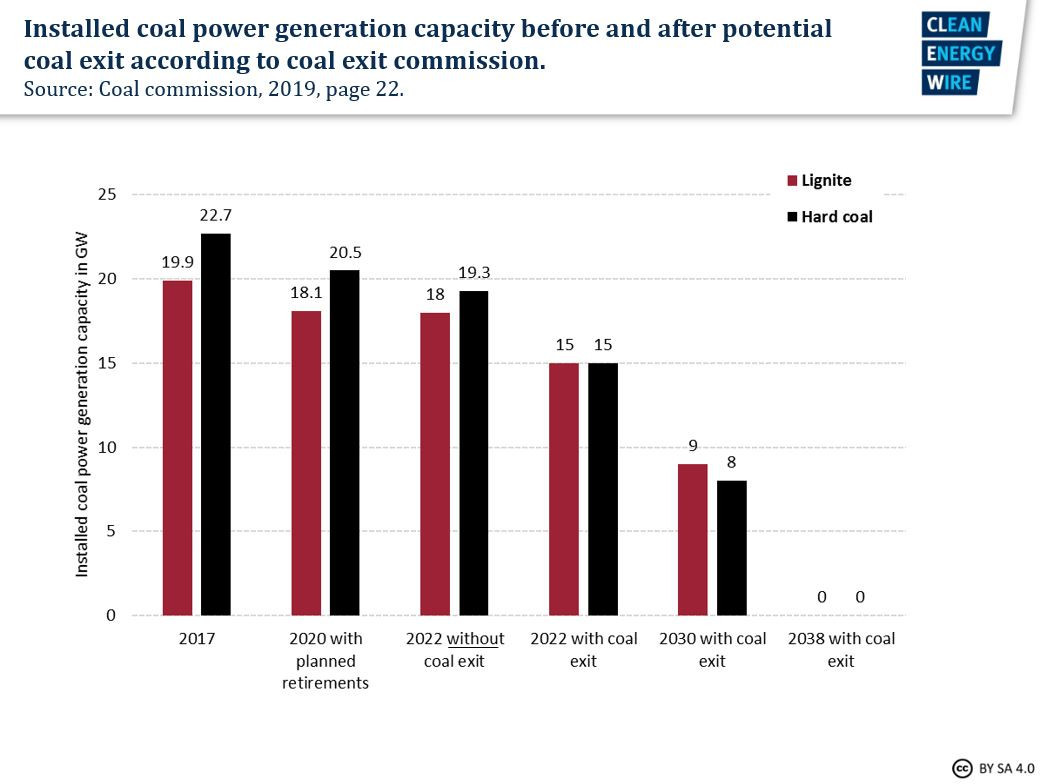 In a sometimes hot tempered panel debate between Praetorius and RWE head Rolf Martin Schmitz at an energy industry conference organised by newspaper Handelsblatt, the former coal commission co-leader insisted that the agreement needs to be adjusted for the sake of climate action. Schmitz countered that the coal compromise stipulated a gradual emissions reduction but no continuous decommissioning of lignite plants.

In fact, the coal compromise recommends both a "steady [stetig] reduction of lignite capacity in the market" and a "steady" reduction of greenhouse gas emissions from coal in the years 2023-2030.

"There will be continuous CO2 reduction because we'll also close hard coal plants in the years when no lignite plants are taken off the grid," Schmitz said, adding that quicker phase-outs also would mean letting down coal workers. But according to Praetorius, the effect of Germany's hard coal plants is much smaller than that of lignite plants. "That's why lignite is at the heart of the entire coal compromise," she said.

Meanwhile, a coal exit law draft dated 21 January, seen by Clean Energy Wire, prescribes a linear reduction of lignite and hard coal capacity combined. In years in which a large amount of lignite capacity is set to go offline, less hard coal plants will be shut down and vice versa. The timing and distribution of shutdowns, however, can be crucial for climate action, as lignite causes more CO₂ when burned than hard coal.

The former coal commission members also criticised other points of the agreement reached a week earlier, arguing, for example, that although the symbolic climate activist battleground Hambach Forest is going to be saved, it would be "outrageous" for several villages near existing coal mines to still be torn down. Antje Grothus of Buirer für Buir, a citizen initiative aiming to protect the interests of people living near the surface mines, said she would not accept to be "used as a tool" for the government to whitewash its exit path, adding that the protests at coal mines and plants would continue.

Moreover, the compensation payments of which energy company RWE alone will receive 2.6 billion euros could reduce the effectiveness of the European Emission Trading System (ETS) as possible economic losses for operators due to high allowance prices would be offset by the payments, the critics argued. Apart from that, the government did not have a plan how to replace vanishing coal capacity and reach a share of 65 percent renewables in power consumption by 2030, given the current expansion blockade in Germany's onshore wind power industry and the looming support cap for solar power, they added.

The former commission members also criticised the planned commissioning of new hard coal plant Datteln 4, which will likely be opened in summer 2020. Minister Altmaier initially had said the plant's opening would not lead to higher emissions since older plants would be shut down in return, but according to the newspaper tageszeitung (taz), Altmaier's ministry (BMWi) as well as the environment ministry (BMU) now expect additional emissions, since the modern plant will run with much more full load hours.

Felix Matthes, research coordinator at the Institute for Applied Ecology (Öko-Institut), said the compromise had generated wide international interest, "especially due to its continuous exit path." However, since the exit now begins with the commissioning of a new plant, this would now send a disastrous signal to all countries which considered emulating parts of Germany's coal exit. According to the Öko-Institut, Datteln 4 could emit up to 14 million tonnes of CO2 more than the plants closed in its stead.

The government's entire agreement would increase emissions by 40 million tonnes by 2030 compared to the coal commission's proposal, the Öko-Institut already stated a day earlier. While the BMU told the newspaper that even more older plants would be taken offline in order to compensate for the effect of Datteln 4's higher workload, Matthes said at the press conference that much more than the 1 gigawatt (GW) capacity of Datteln 4 had to be decommissioned to compensate the new plant's carbon footprint.

Climate activist group Fridays for Future announced it would hold a protest in front of the plant near Dortmund in western Germany, arguing that the plant would be commissioned "against the coal commission's resolution." The commission’s final report said “agreements” should be reached for coal plants that had already been built but are not yet operational to stay offline, with Datteln 4 being the only plant in the country that fits the description.

Cancellation of allowances in the EU Emissions Trading System (ETS)

The draft also stipulates that the German government will cancel the amount of EU Emissions Trading System (ETS) allowances corresponding to the additional emissions reductions caused by the shutdown of coal power capacities, “insofar as it is not withdrawn from the market through the Market Stability Reserve” (MSR). The MSR was introduced in 2019. It is a mechanism to take excess carbon allowances out of the market.

At least two independent reports, in which the economy ministry and finance ministry will participate, will determine whether and how many allowances will be cancelled. The German government will notify the European Commission in the calendar year after the plant shutdowns, and Germany will have less allowances to auction in the year after that, states an explanation annexed in the draft.