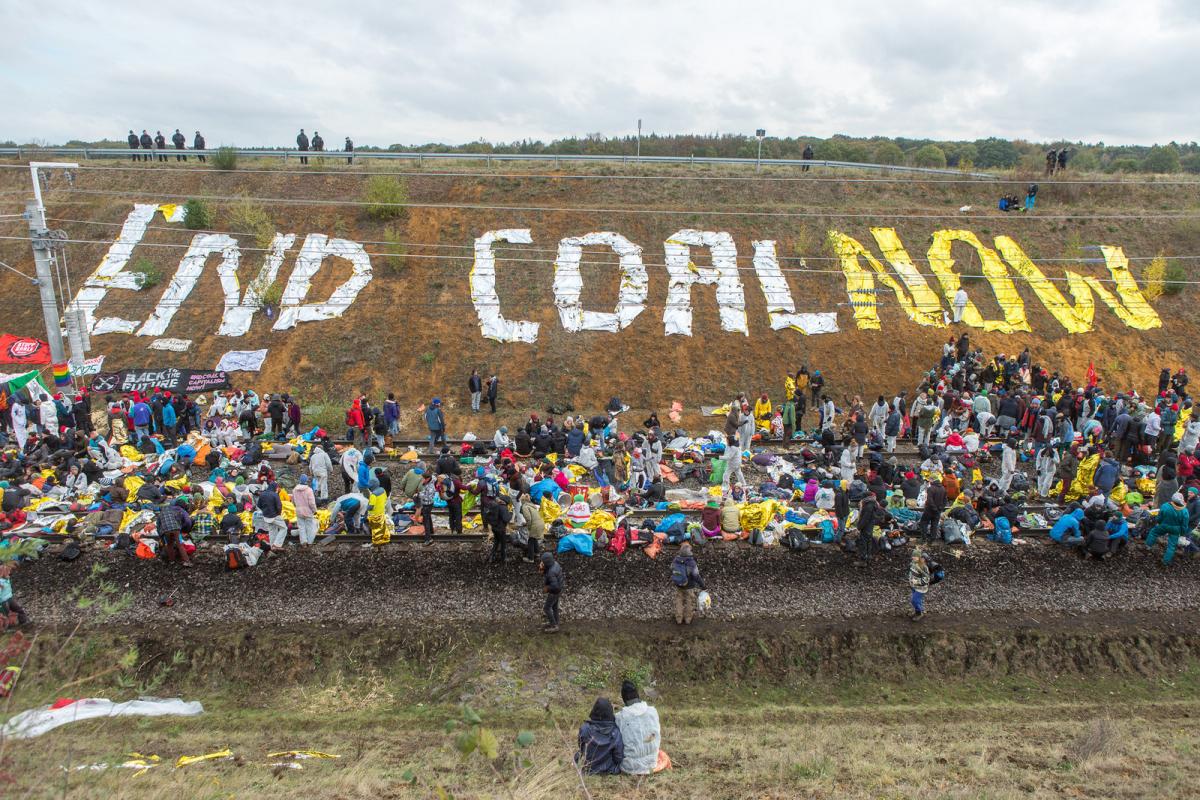 Anti-coal protesters near the embattled Hambach coal mine in October. Photo: Ende Gelände

The German coal exit commission has debated a first draft that outlines how the country could start the phase-out the fossil power source in the coming years. According to a leaked draft plant operators could receive compensation payments for shutting down capacity while power customers and energy-intensive industries should be shielded from drastic price increases. The commission suggests some form of carbon price scheme for the sectors such as transport or heating. The draft does not contain any detailed numbers and dates yet. After two days of meetings, the four task force heads said the commission intends to be done by 28 November. [UPDATE: press release after this week's meetings; Sources to draft report throughout, adds details on timeline: excerpt deals with closures by 2022]

The German coal exit commission has compiled a first draft for the early years of a possible phase-out scenario for the fossil fuel, including compensation payments to owners of power plants. Germany’s hard coal and lignite plants should be taken offline in consensus with the industry and be coupled with possible compensation payments for retired coal capacity, says the draft seen by the Clean Energy Wire

The compensation should be paid out of the federal budget and not be offset by a higher power price, says the text, first reported by news agency Reuters. The commission members, ranging from environmental groups, utility and business lobbies to consumer groups and representatives of the regions affected, suggest that Germany’s power tax should be reduced while the transport and the construction sector should be made subject to “CO2 pricing”.

The six-page excerpt of a future final report said that agreed measures will “create planning security for market actors and regions, will happen in an acceptable way for employees and offers plant operators a just solution”.

In a bid to improve Germany's poor greenhouse gas reduction record and to identify economic prospects for people employed in the waning coal industry, the government has set up a commission tasked with planning the definite phase-out of coal-fired power production. It is supposed to propose a phase-out path, including an end date for coal-fired power production in Germany before the end of 2018.

In a press release after this week's meetings, the task force heads said: "The Commission intends to complete its work on 28 November 2018." Should an agreement not be found by that day, there is one last meeting planned for 11 December.

The world’s fourth largest economy has made climate protection one of the priorities in its Energiewende, a dual shift from fossil fuels and nuclear power to a renewables-based energy system. Germany has rapidly increased its share of renewable energies, but greenhouse gas emissions have stagnated in recent years. Ahead of today’s meeting, a leaked government climate protection report draft said Germany’s efforts to bring down emissions to reach its 2020 climate goal have been insufficient so far. The coal commission is charged with proposing new measures to help narrow the gap to the 2020 target “as far as possible.”

The chapters of leaked document deal with these early years of a German coal exit. Recognising that “not all measures the commission proposes to close the gap to 40 percent greenhouse gas reduction can be implemented or effective by 2020”, the task force has decided to extend the period to 2022.

“Due to the nuclear phase out at the same time, the agreed decommissioning of the lignite and hard coal-fired power plants will take place gradually until 2022,” says the text. The draft does not yet contain chapters on the energy sector’s contribution to reach 2030 climate targets, or on an end date for coal-fired power generation.

Sources from the coal commission voiced "cautious optimism" that the task force will decide a deal by 11 December, when the commission is scheduled to have its final meeting. The task force has set up a Friends of the Chair Group – a small core group of its members – which prepares the commission’s work in the meetings.

The draft does not yet contain any concrete dates spelling out which power plants should be retired at what time and leaves blank spaces in the respective sections. However, the commission has agreed on several requirements that should accompany Germany’s coal exit, such as “achieving consensus with plant operators to ensure legal certainty and effective climate protection for plant closures by 2022”.

The commission recommends that a clear compensation scheme is agreed on beforehand and that any phase-out plan should also include “rules for a socially acceptable coal exit.” According to the draft, there should be no enforced redundancy and no “unfair” social or economic disadvantages for coal workers. Instead, they should be given new job perspectives, the document says.

The commission proposed that emissions allowances for closed coal plants should be deleted from the EU’s emissions trading system (ETS), making use of a recent reform of the European system.

According to the draft, the proposed measures to shut down coal power capacities “reduce supply, move the merit order to the left and thus raise the power price.” Energy-intensive industries should continue to be protected from a rise in power prices after coal plant closures, and companies that do not yet benefit from existing ETS power price compensation regulations, should also be relieved.

The draft says that the effects of the first plant closures should be examined in 2022 and then again in 2023 and 2026 to assess the impact on supply security, carbon emissions and power prices.