German court stops controversial clearing of forest for lignite mine 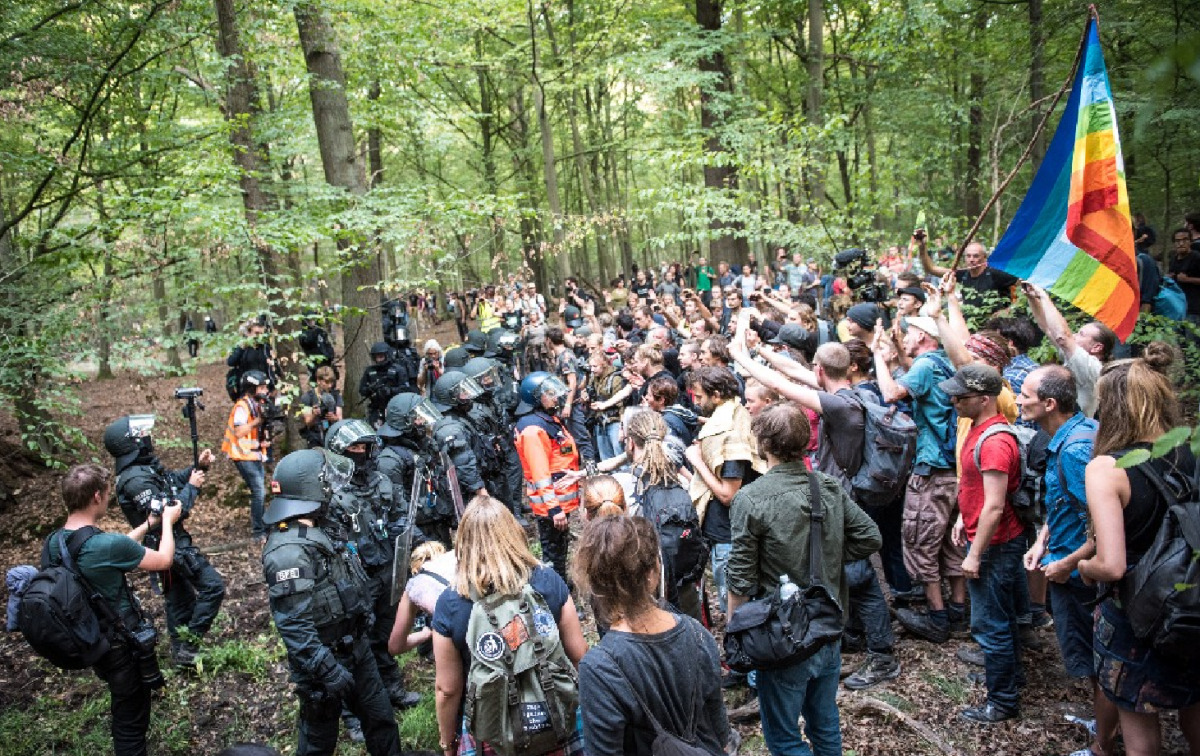 Clearing operations at the embattled Hambach Forest to make way for a coal mine have to be halted to decide whether the forest is protected by EU environmental rules, a German court has decided. The judges said energy company RWE did not provide sufficient evidence why cutting down the ancient woodland is necessary. According to the company, the ruling means that no decision on the forests future will be made before late 2020. [UPDATE Energy company RWE says ruling will significantly delay decision on Hambach mine expansion]

The administrative court in the western German city of Münster has ordered that clearing operations at the embattled Hambach Forest be stopped immediately until a judiciary review of energy company RWE's plans for the mine. RWE is allowed to continue mining in its nearby lignite [brown coal] mine “as long as it does not expand operations to the forest area,” the court said in a press release.

Environmental NGO Friends of the Earth Germany (BUND) had filed a lawsuit against RWE’s operating plan for the mine until 2020. “This is a great success after years of legal efforts, and truly a ground-breaking decision,” said Dirk Jansen, head of the BUND in the federal state of North Rhine-Westphalia (NRW). “We’re very happy.” The Hambach Forest has become a symbol for climate activists in Germany and beyond in recent months, as RWE's announcement to remove it conincided with the work of a coal exit commission that currently negotiates the end of the fossil power source in Germany.

The court now said it had to be clarified whether the ancient woodland is covered by EU environmental rules due to its population of protected bat species. The “unusually complex factual and legal questions arising from this matter” could not be answered quickly, the court said. Scores of legal documents had to be analysed first, which is why RWE could not be allowed “to create irreversible facts by using the forested areas” and cut down trees to prepare the expansion of its coal mine. The court argued that RWE did not show persuasively why an immediate clearing of the Hambach Forest was necessary to “avoid severe and concrete danger” at the mine and ensure power supply security in the region or in Germany as a whole.

Another court in the city of Cologne will now review the arguments provided by RWE and evaluate whether EU environmental protection regulations apply to the embattled forest. A spokeswoman of the Cologne court told the Clean Energy Wire that this procedure "will not be finished within just a few weeks."

RWE said the court's decision had been "a great surprise" for the company and that a final decision on the forest's future might not be made before the end of 2020. Halting clearing operations would have a "significant short-term impact on our operations and the planful development of the Hambach mine" as a "domino-effect" caused by the clearing stop meant that mining operations in the open pit would eventually have to be stopped too. The company said the stop would cost RWE more than 100 million euros per year from 2019 on.

Conservative NRW state premier Armin Laschet of Chancellor Angela Merkel's CDU party said on Twitter  the court ruling was "an opportunity to reflect and look for solutions that secure the energy supply and jobs as well as protect the environment." Laschet added that "no facts will be created" and that courts would have "the last say" on the matter.

RWE's announcement to cut down the forest to expand its lignite mine irked environmental organisations and many ordinary citizens alike. They called for stopping operations until the coal exit commission makes a decision on the future of coal in Germany. RWE rejected this, arguing that the commission's work and the decision to expand the Hambach mine are not connected. NRW's government under Armin Laschet largely backed the company's position in recent weeks.

"We are going to celebrate"

RWE has not yet begun cutting down trees in the Hambach Forest but police removed protest camps over the last weeks, some of which had existed for several years. The clearing operations were overshadowed by fierce protests and the death of a journalist who fell from a tree while documenting the protesters' activities. The company had argued that the adjacent lignite mine’s stability could not be guaranteed if the forest is not removed to expand the mine and that NRW’s power supply security would be put in jeopardy if the coal supply of nearby power plants is interrupted. Leaving the forest intact would therefore cost up to five billion euros, RWE head Rolf Martin Schmitz had argued.

Protests against RWE's plans and the German government's inaction were mounting over the last weeks. Shortly before the Münster  court annunced its ruling, nearly 100 civil society organisations from across the world, including Greenpeace and E3G, had called on chancellor Merkel. They urged her to “intervene immediately by supporting a moratorium on any tree felling activities” and by openly committing to a swift coal phase-out in Germany.

The court's intervention then came as a relief to many climate activists. “We are going to celebrate,” several environmental NGOs said at a press conference originally planned to provide journalists with information about a mass protest against RWE over the weekend. Police initially tried to prohibit the protest with an expected 20,000 participants over safety concerns but another court ruled that the protest has to be admitted, the newspaper Rheinische Post reported. The NGOS called the court's decision to halt clearing operation “a slap in the face” for both RWE and the regional government.

Martin Kaiser of NGO Greenpeace said “today is a good day for environmental and climate protection.” He said RWE had fuelled the conflict at the Hambach Forest “without a legal basis” and attempted to “undermine a societal consensus on the coal exit.” The court’s intervention had shown that “RWE is on the wrong side of history,” Kaiser said.