Germany’s government has decided to reduce emissions from diesel cars in polluted cities by swapping old models for new ones and retrofitting some older cars. Transport minister Andreas Scheuer and environment minister Svenja Schulze called the deal “a huge step” to improve air quality, to avoid driving bans, and to secure the diesel’s future. But environmental NGOs and media criticised the lack of firm commitments by carmakers and said the agreement was “piecemeal” because the government had “caved into” industry pressure.(UPDATE - adds media reactions; Schulz insists on hardware retrofits)

Diesel drivers in the most polluted German cities will be offered incentives by carmakers to trade in their older vehicle against a newer model or receive a hardware retrofit. But the crucial aspect of financing has not been settled. To the dismay of environmental and consumer NGOs, environment minister Schulze and transport minister Scheuer only said they “expected” carmakers to foot the bill and had not yet reached firm commitments from the companies.

More than three years after the start of the “Dieselgate” scandal, the government also agreed to step up the retrofitting of municipal bus and lorry fleets, as well as commercial vans. “We have found a way out of the diesel crisis,” Schulze told a news conference to present the “concept for clean air and safeguarding individual mobility in our cities.”

Scheuer said Volkswagen had agreed to help with hardware retrofits, while Daimler would consider them and BMW had ruled them out. All carmakers would concentrate on trade-in incentives, Scheuer said.

Schulze later said in a newspaper interview she would insist on hardware retrofits from all carmakers. "We haven't heard the last of it," Schulze said.

The ministers expressed confidence that carmakers will agree to pay up. “My impression is that the car industry has a big interest in restoring the image of diesel,” Schulze said. “We offer carmakers a big opportunity to regain trust.” Scheuer said he expected “the companies will use the opportunity to secure a future for the diesel.”

While the Conservative (CSU) Scheuer has sided with carmakers in calling for incentives for owners of older vehicles to trade them in for newer models in addition to software updates, Schulze, a Social Democrat (SPD), has favoured hardware retrofits unpopular with auto makers.

After years of administration failure to curb excessive pollution, courts have ordered several German cities to reduce nitrogen dioxide (NO2) below EU limits, if necessary by banning the use of most diesel cars in inner cities.

The Nature and Biodiversity Conservation Union (NABU) called the deal “piecemeal” and said the government should have forced carmakers to implement wide-ranging retrofits if citizens’ health was its primary concern. Greenpeace accused the industry of exploiting the diesel crisis for their benefit. “The carmakers are trying to turn their cheating on emissions into a sales bonanza for new cars – a strategy that will continue to damage the climate and waste resources,” the NGO said according to a Reuters report.

German consumer organisation VZBV said the deal left many questions unanswered. “If carmakers don’t go along, consumers have not gained anything,” said association head Klaus Müller. “From the consumers’ point of view, it’s obvious that carmakers have to pay for hardware retrofits.”

Prominent media commentators called the deal "a rotten compromise" and "a big bluff." Holger Steltzner argued in Frankfurter Allgemeine Zeitung the agreement would not tame the anger of diesel drivers because only one in 10 are likely to be offered incentives to trade in their old car against a more recent model. Markus Balser said in Süddeutsche Zeitung the deal falls far short of what is necessary to solve “one of the country’s largest health and environmental problems.” In business daily Handelsblatt, Martin Murphy called on carmakers to ditch the "obsolete" technology because it offered no environmental benefits.

The government diesel deal concerns local nitrogen oxide emissions but will have ramifications for Germany’s climate ambitions. Schulze said the diesel was key to achieving climate targets: “We will need the diesel to cut CO2 emissions.”

Energiewende home country Germany struggles to clean up its transport sector, where emissions have remained roughly unchanged for decades as efficiency gains were eaten up by increasing traffic volumes. [Find all the background in our dossiers on transport, the car industry, and the freight sector] This is why Merkel has called transport the "big problem child" of climate policy.

Only two weeks ago, the government launched a new advisory panel to reduce transport emissions in line with national climate targets. The task force is meant to develop proposals on how to reach the official target of cutting emissions in the transport sector by 40 to 42 percent by 2030 compared to 1990 levels, mirroring the work of the country’s coal commission. The government wants to incorporate the suggestions in a climate protection law due in 2019.

For the first time since the beginning of the dieselgate crisis, the share of diesel cars in new car registrations dropped below 30 percent in September 2018. 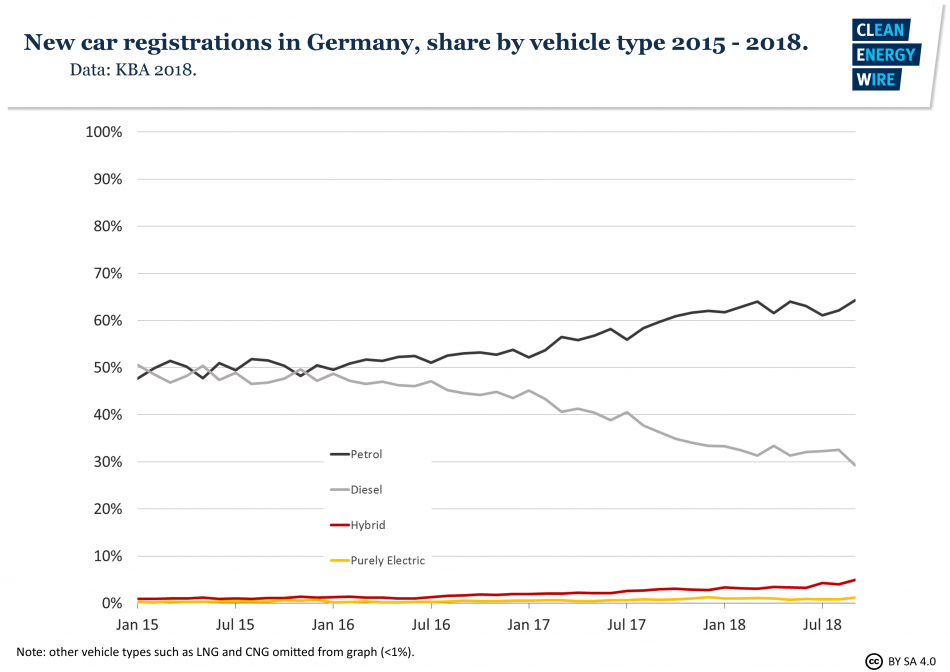