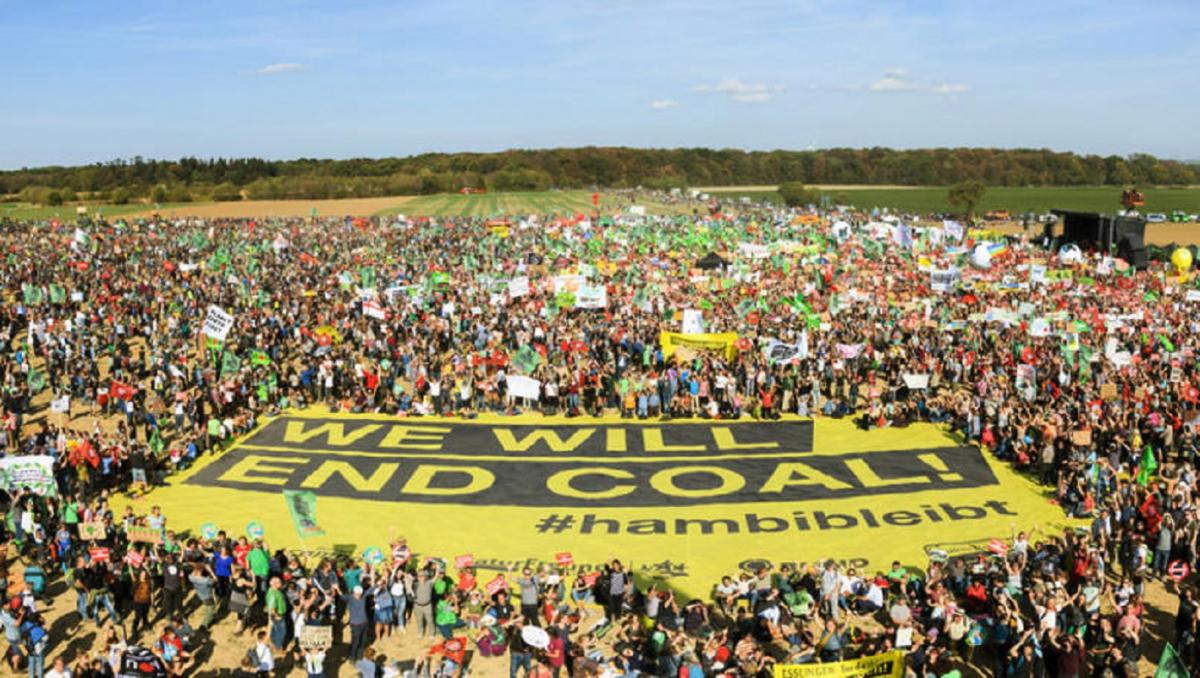 Anti-coal activists in Germany and beyond experienced a sudden change in fortune on 5 October, when a court ruling boosted their cause and provisionally stopped plans of energy company RWE to cut down the embattled Hambach Forest in western Germany to make room for a coal mine. The ruling dealt a heavy blow to RWE and the energy policy of Chancellor Angela Merkel's conservative CDU party in coal state North Rhine-Westphalia. Although it is unclear how the judges’ decision will affect Germany’s coal exit commission, activists and observers say it might ease the way to find a path to end coal-fired power production in the country.

The ruling by a German court on 5 October to halt the clearing of the embattled Hambach Forest could turn out to be a pivotal moment for the country’s climate and energy policy. Anti-coal activists have celebrated the stop of clearing operations at the ancient woodland which were meant to make room for a nearby lignite [brown coal] mine by energy company RWE as a harbinger of an accelerated coal exit in Germany. But energy policy anaylsts remain cautious whether the verdict will have a noticeable impact on the work of Germany’s coal exit commission, which currently negotiates the path to an end of coal-fired power production.

The Hambach Forest has become a symbol for climate activists in Germany and beyond that illustrates diverging opinions on how the country’s Energiewende, the dual phase-out of fossil and nuclear power sources towards a more efficient and low-carbon energy system, should be managed. Anti-coal activists have held out in the forest for years and the pending lawsuit over the clearing's lawfulness helped maintain a stalemate between protesters and RWE.  But in a recent police crackdown and raid of the activists' tree houses that was backed by the coal state North Rhine-Westphalia's (NRW) government, tensions flared up and resulted in a deadly accident and scenes of mass protests against a technology that still is a cornerstone of Germany's power mix.

Climate activists say cutting down the forest as the coal exit commission concurrently debates the end of coal in the country is an unnecessary endeavour that only makes reaching national climate targets more difficult. Environmental groups on the commission have even threatened to leave the talks should the clearing go ahead. On the other hand, business representatives warn that the country’s power supply could become less secure and more expensive in case of a rapid coal exit.

In what environmental NGO BUND described as the “by far greatest demonstration the Rhenish coal region has ever seen,” tens of thousands of anti-coal protesters flocked to the forest on Saturday to voice their support for preserving the remainder of a once much larger forested area that has been largely consumed by the adjacent coal mine, the largest of its kind in Germany. 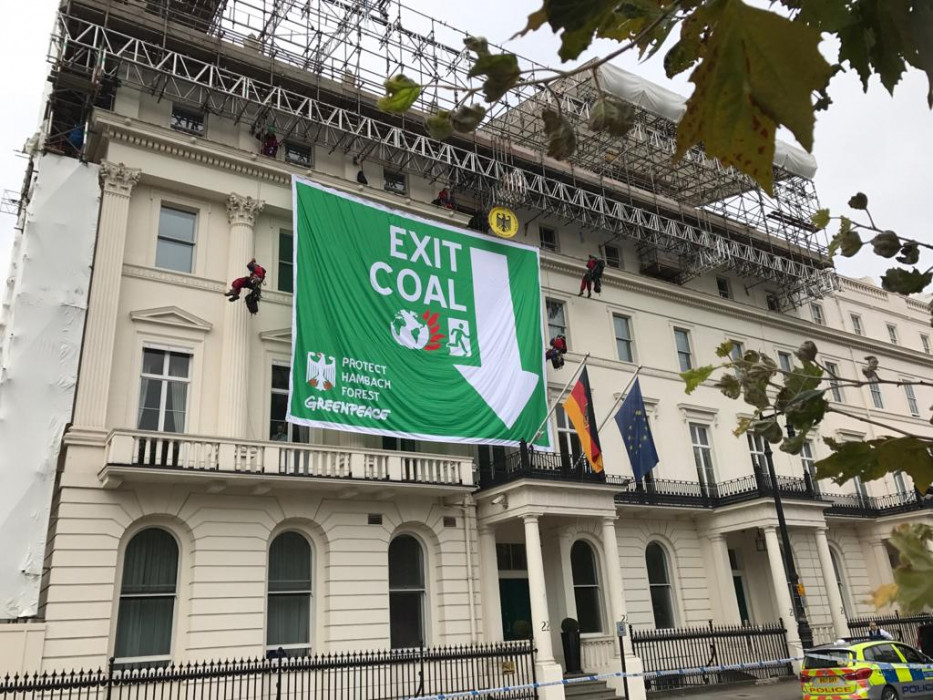 Although the court’s decision does not mean that the Hambach Forest will be protected indefinitely, it will significantly delay any decision on its future – according to RWE, this might not happen before late 2020. The verdict allowed climate activists to use their gathering to celebrate a clear stage-victory against RWE and Chancellor Angela Merkel’s conservative CDU party, whose regional NRW party leader, Armin Laschet, called the ruling an "opportunity for reflection."

Commentators in German media argued that the Hambach Forest “could become for coal what Fukushima has been for nuclear power.” However, initial reactions from members of the coal exit commission, on whose work the government plans to base its coal policy, gave no straightforward conclusion as to how the ruling might affect the fossil fuel’s phase-out. Martin Kaiser, head of Greenpeace Germany, said the court’s intervention would spell “tailwind for the commission’s work” as the mounting anti-coal protests had shown that the public supports a swift coal exit.

On the other hand, Holger Lösch of the Federation of German Industries (BDI) told newspaper Handelsblatt that the ruling will have no impact on the body’s work. “What held true before the court’s decision still holds true now: the coal exit commission talks about medium- and long-term decisions” and does not negotiate any short-term solutions for the Hambach Forest, Lösch argued. The commission’s leaders had made it clear already in August that the situation at Hambach is not part of the body’s mandate.

According to energy policy newsletter Tagesspiegel Background, one commission member feared that the ruling could deepen the ideological rift between the body’s constituents. “Maybe all parties involved will now become more radicalised,” the member told Tagesspiegel, while another one said the verdict could at least help the commission to observe its timetable and decide on an end date for coal-fired power production in the country before the COP24 in Poland in December.

Against the backdrop of mounting calls for more ambitious climate action by the German government and substantiated by the UN’s Intergovernmental Panel on Climate Change’s (IPCC) latest report on global warming, which urges much greater international efforts to keep the rise in temperatures as low as possible, Green politician Anton Hofreiter echoed the opinion of many German citizens when saying that “Germany has to exit coal as quickly as possible” and strive for a phase-out by 2030.

Economist Andreas Löschel, who heads the German federal government's Energiewende monitoring expert commission, warned against expectations that the phase-out can be carried out rapidly. “The coal exit is a long-lasting endeavour” for which the court ruling at best could help finding a consensus,, Löschel told. RWE might well resume operations at the Hambach Forest once the final court decision, expected in about two years, is taken. “This is a very realistic scenario and makes sense from RWE’s point of view,” he added.

The court’s decision also laid bare differences within the federal German government over current state of play. Just days before the ruling, conservative (CDU) state secretary in the energy ministry (BMWi), Thomas Bareiß, told at an international audience that the clearing should go ahead and lignite was needed to ensure Germany’s power supply and that a phase-out would still take a long time. At the weekend, the Social Democrat (SPD) state secretary in the environment ministry (BMU), Jochen Flasbarth, congratulated protesters at the forest, saying that “Germany’s coal exit will come in a way that allows us to fulfil our duties in line with the Paris Climate Agreement.”

RWE could “enter a conflict it cannot win”

Regardless of the immediate impact on energy policy, the ruling is a severe setback for RWE, with possible implications for the planning security of other large-scale fossil fuel projects, too. The company had said that if the mine is not expanded, a chain reaction would cause all excavators in Europe’s biggest coal mine to stand still and put regional and even national energy security in jeopardy. Two nearby coal plants could no longer be supplied with lignite and up to 4,600 jobs were on the line, it argued.

The court, however, was not convinced by RWE’s arguments and ordered that the company provide more evidence to substantiate its claims. It also ruled that the forest might be subject to EU environmental protection regulations due to possible populations of protected bat species that would take more time to ascertain.

The company said it now expects a “low three-digit million euro amount” per year in additional costs from 2019 on and a total cost of up to five billion euros could result from the ruling. RWE’s stock price took a dive after the court’s decision was announced, plunging by more than eight percent, which wiped more than one billion euros off the firms market cap in just one day. The stock continued its slide on Monday, closing another 3.2 percent lower.

A study commissioned by the Green Party found that up to two thirds of all the coal that RWE still plans to mine – 700 tonnes out of a total of 2.3 billion tonnes – would have to remain in the ground, even if the company was to retire its last coal plant in 2040. The analysis conducted by energy research institute IZES was based on scenarios discussed in Germany’s coal exit commission.

For RWE, which after a surprise-deal with competitor EON in March 2018 is set to become one of Europe’s biggest renewable power producers,  the crucial question therefore is not whether it will be allowed to mine the coal under the Hambach Forest, Thomas Klemm writes in an analysis for the newspaper Frankfurter Allgemeine Sonntagszeitung. "The much more pressing question is whether the company is now entering a conflict that it cannot win.”