German lignite plants deep in the red, should get little compensation to close – report 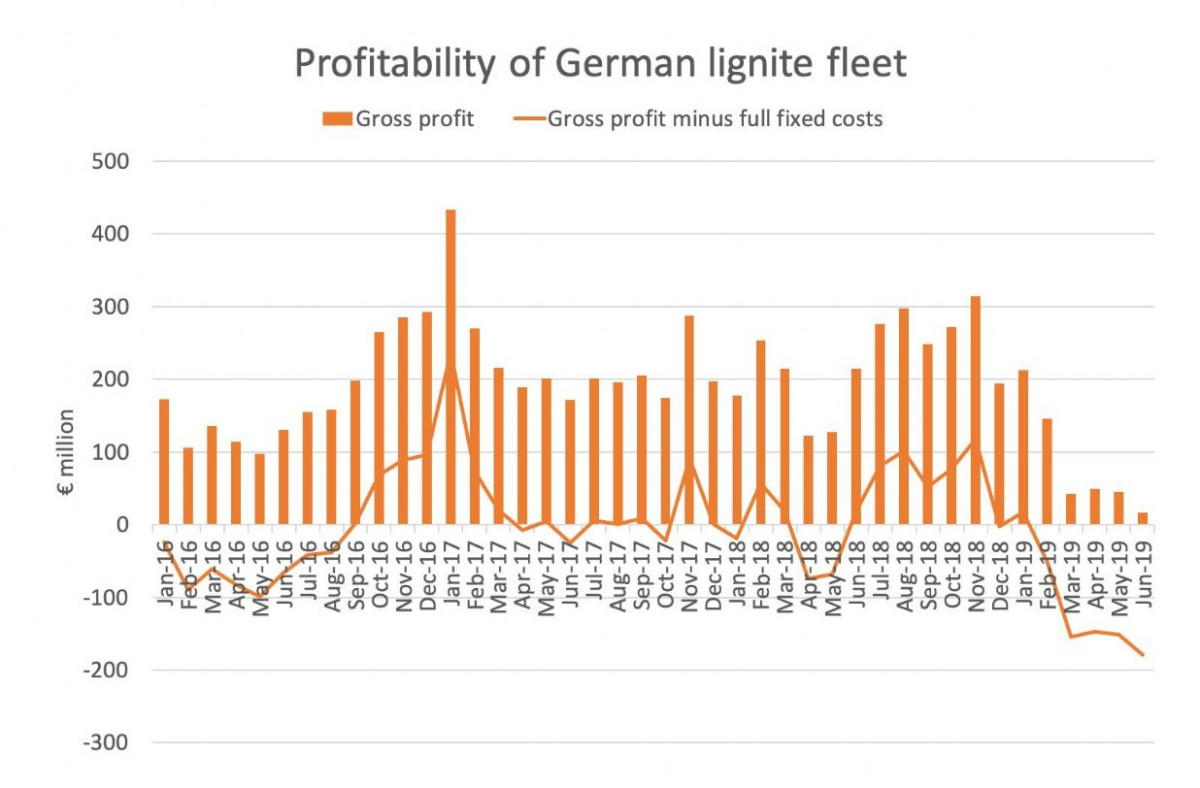 Germany’s fleet of lignite power stations has likely lost more than 600 million euros in the first half of 2019, as profits “collapsed” and fixed costs could not be covered, according to modelling by Sandbag. The climate change think tank called on German policymakers to accelerate plant closures and push back on compensations claims by lignite operators in light of the country’s planned coal exit. German utility RWE rejected the report’s conclusions, according to a report by Tagesspiegel Background. The German economy ministry said it takes into account the market environment in its compensation negotiations with operators.

German lignite power plants likely lost more than 600 million euros in the first half of 2019, according to estimates by British climate change think tank Sandbag. Their modelling, based on presumed fixed costs and current wholesale electricity and EU Emissions Trading System (ETS) allowance prices, shows that profitability has “collapsed,” that older lignite plants lost more than new facilities, and that not a single lignite unit turns a profit, according to Sandbag.

The think tank cautions that only lignite operators RWE and LEAG know the exact profitability and costs. But Hanns Koenig, energy analyst at Aurora Energy Research, told Tagesspiegel Background that the report’s assumptions about the full costs are realistic and the overall conclusion plausible.

Germany is trying to wean its economy off fossil fuels and nuclear energy as part of its landmark energy transition project. But the country has been struggling to meet energy and climate targets due in part to a continuing high dependence on coal for power production. Germany still has many plants burning hard coal, in addition to its fleet of lignite-burning power plants, which are particularly dirty and located near the country’s open-cast lignite mines. A multi-stakeholder coal exit commission recommended earlier this year that the country exits coal by 2038 “at the very latest.” 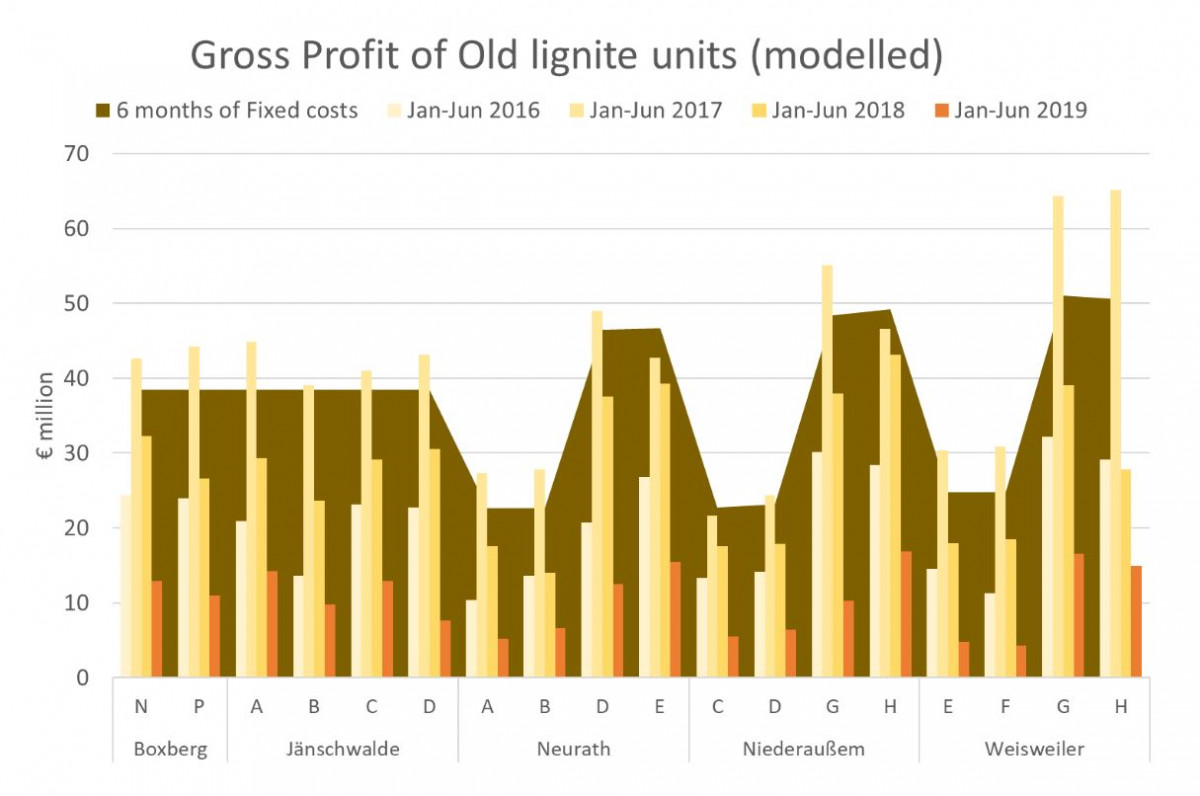 “The lignite cash cow has disappeared”

According to Sandbag, the economic situation for lignite plants is unlikely to improve in the medium term and the German government “should accelerate lignite closures and push back on excessive compensation claims, knowing lignite profitability has collapsed.”

“We were surprised at just how aggressive the very recent collapse in lignite profitability has been,” said the think tank’s electricity analyst Dave Jones. “The lignite cash cow that’s existed for decades has disappeared.” 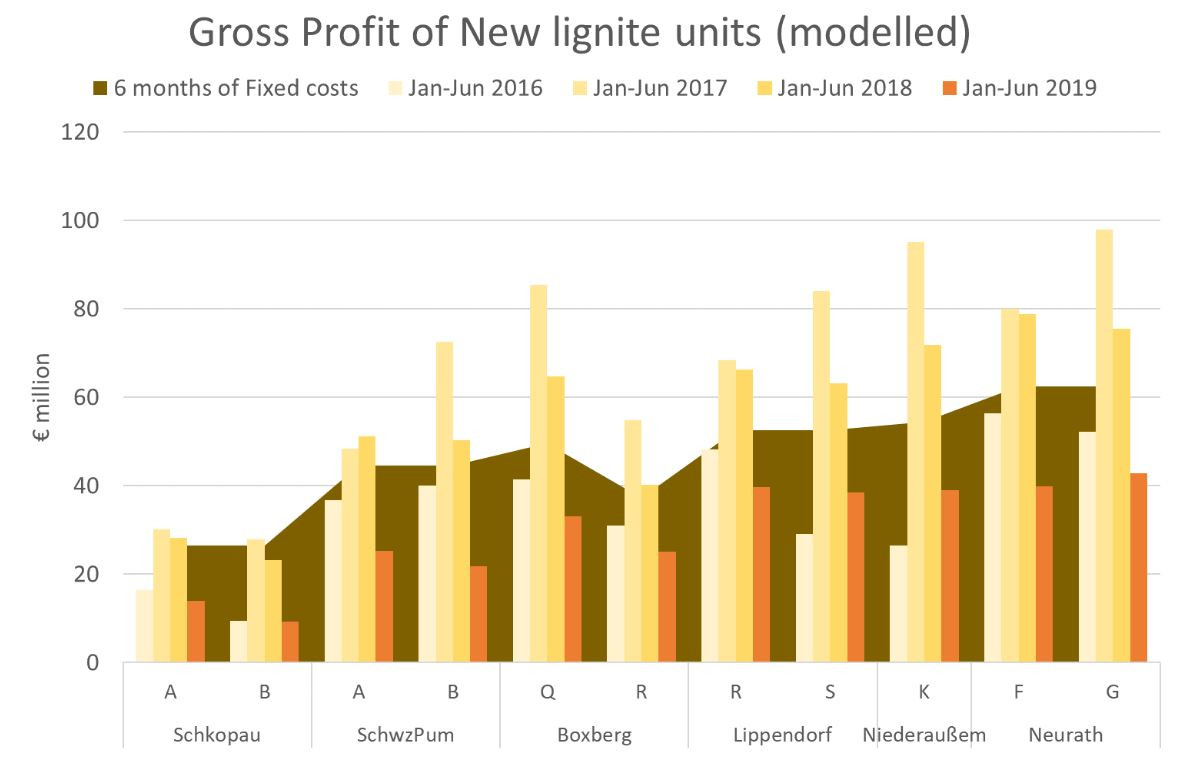 In light of Germany’s ongoing debate about a coal exit, operators such as RWE are demanding compensation payments for capacity which they would have to take offline before the end of plant lifetimes. The country’s coal exit commission recommended earlier this year settling questions related to compensation for lignite operators in “mutual agreements”. In July, economy minister Peter Altmaier said he aimed to find a mutually agreeable solution with lignite companies. “The talks with RWE are advanced and very constructive,” he noted.

RWE has said it estimates costs of 1.2 to 1.5 billion euros for each gigawatt (GW) of power plant capacity switched off. However, low gas prices combined with a rise in the cost of CO2 allowances in the ETS and lower wholesale electricity prices caused by a boom in renewables have given gas an advantage over lignite in recent months. With a loss of profitability, “the case for minimal compensation and maximum early closures is clear,” writes Sandbag.

In a reply to a parliamentary inquiry by Lisa Badum, climate policy spokesperson of the Greens in the German Bundestag, the federal economy ministry said it “takes into account the market environment as well as the developments in the electricity market in the negotiations with the operators of lignite power plants.” The ministry did not specify further.

“The dirty power from lignite is increasingly worthless and thus dispensable,” said the Greens’ Badum in an e-mailed statement. She cautioned the German government to make sure the operators “do not retrieve their lost profits through compensation payments” from taxpayer money.

RWE rejected the report’s conclusions, citing the unusual market situation characterised by high renewables output and low natural gas prices. The company, which has just raised its earnings forecast for 2019, also told Tagesspiegel that it expected gross profits of 300-400 million euros from its nuclear and lignite division, and that its 2019 power production is secured against price fluctuations due to existing forward transactions.

Sandbag’s Jones called on German lignite operators to show transparency: “How much are their power plants really worth, and how quickly can they phase out these ancient, polluting lignite units?”