German carmakers BMW, Mercedes, and Audi have recorded above-average sales of plug-in hybrid vehicles this year, according to a report by the Center of Automotive Management (CAM). While these vehicles represent only 3.9 percent of all cars newly registered in Germany between January and May, BMW, Mercedes, and Audi registered a share of between 7.0 and 8.3 percent. VW, which bets heavily on purely electric vehicles, has only reached a plug-in share of 1.9 percent. CAM said a total of 74,980 pure electric and plug-in hybrids were sold in this period, an increase of 92 percent over the same period last year – 36,188 were battery electric vehicles (an increase of 43 percent) and 38.792 were plug-ins, an almost three-fold increase. VW is the pure electric vehicle market leader with sales of 9.090 cars, already exceeding last year's total. This takes VW's share of this car type to 4.9 percent, compared to 3.3 percent for Audi, 2.6 percent for BMW and 0.4 percent for Mercedes.

"The sales figures in Germany reveal that German automakers are better than their reputation in electromobility and can continue to benefit from the market ramp-up," said Stefan Bratzel, who headed the analysis. He has forecast that total e-car sales will double this year to around 220,000 thanks to additional government support as part of the country's stimulus package. "However, with the exception of VW, the current focus is still strongly on plug-in hybrids, where the German premium manufacturers already have a wide range of models," he continues. "Plug-in hybrids, which are often sold as company cars, in many cases do not make a positive contribution to fighting climate change because of the large discrepancy between stated and real consumption."

Germany's mighty carmakers look ahead with trepidation to the shift to electric mobility as it promises to be a tremendous effort for the industry. Against the backdrop of slowing global car sales and huge investments in clean propulsion technologies, the EU's new stringent emission rules entered into force in January, forcing Germany's major carmakers to rely on strong sales of electric vehicles to compensate for their conventional high-emission models. 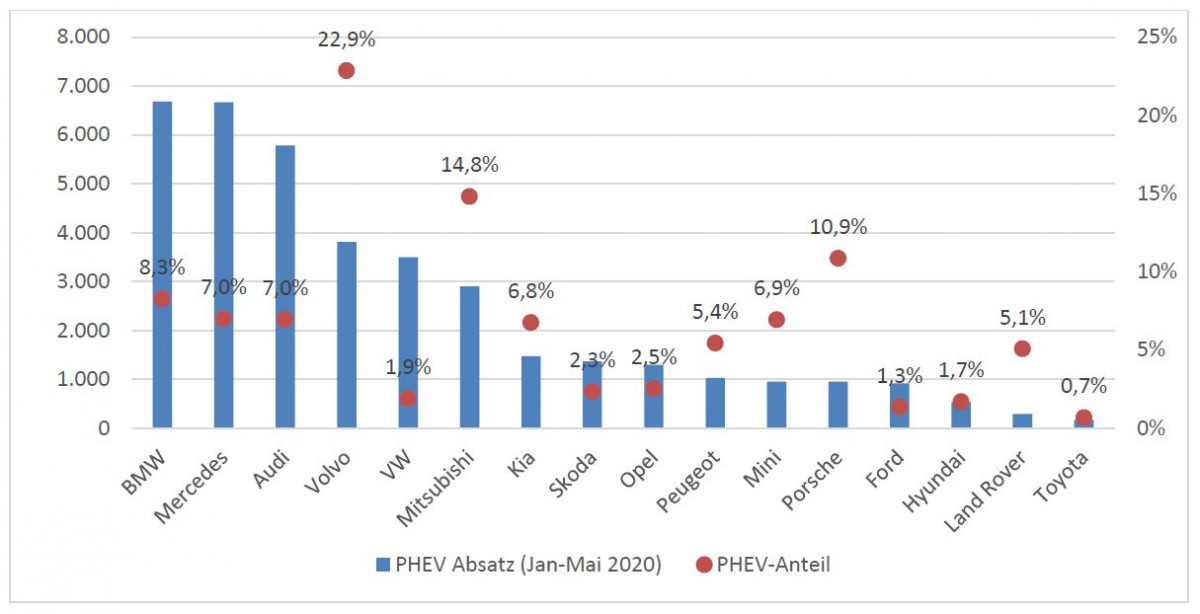