Germans more concerned about climate change than other Europeans – survey

A large majority of Germans think addressing climate change must be part of the post-COVID-19 economic recovery. In a large-scale, international survey of 30,000 people in the EU, USA and China conducted by the European Investment Bank (EIB), 63 percent of Germans said emission reductions should be part of recovery programmes, compared to 57 percent in Europe as a whole. Around half of the German population (51%) says climate change is one of the three biggest challenges the country is facing, along with economic and financial issues (43%) and the pandemic (68%). Before the pandemic, more Germans (59%) rated climate change as one of the three biggest problems last year.

The EIB survey underlines other polls showing that climate change remains a crucial issue for German voters, who will head to the polls in autumn 2021 for the general elections. In the summer, around 90 percent of Germans said in a survey that the topic’s importance has remained the same or even increased since the beginning of the year.

In the rest of Europe, worries about an economic recession, financial crisis and unemployment dominate people's concerns, according to the EIB survey. In countries such as France, Italy and Sweden, only around a third of people rank climate change among the top three greatest challenges. In Austria (45%) people rate the problem of climate change almost as highly as in Germany.

Sixty-five percent of Germans are in favour of stricter government measures forcing citizens to change their behaviour to tackle climate change. This is lower than the European average: in the 27 EU states, as many as 70 percent of those surveyed want stricter government regulations to enforce more climate-friendly consumer behaviour. Approval rates for this policy was highest in Portugal (85%) and Italy (80%). 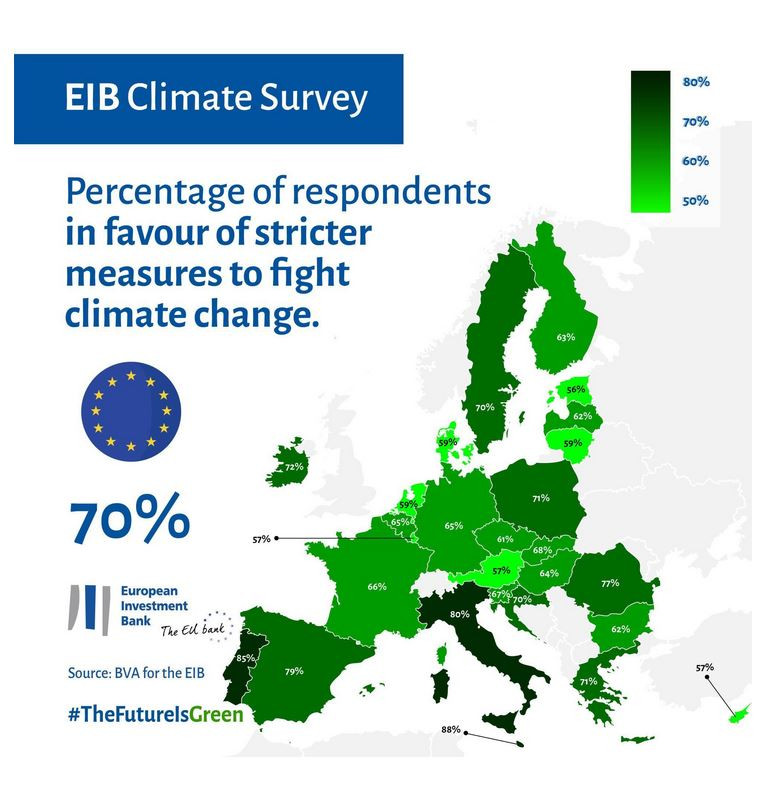