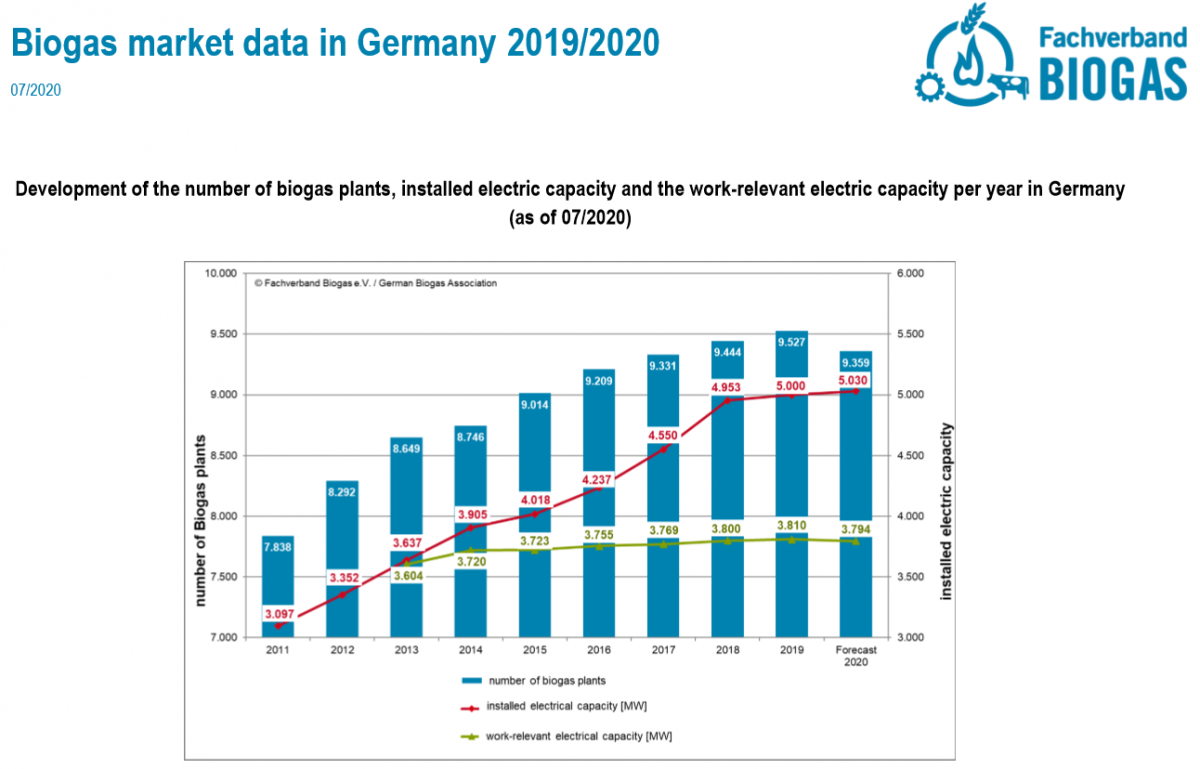 The number of biogas plants installed in Germany is set to fall for the first time since they were introduced around 20 years ago, a projection by the German Biogas Association (Fachverband Biogas) shows. While seeing continuous, albeit in recent years much less growth in the number of plants, the country was set to lose around 168 plants in 2020, Horst Seide, president of the German Biogas Association, said at a press conference. He listed the end of the 20-year guaranteed remuneration under the Renewable Energy Act (EEG) and adverse regulatory framework conditions for new plants as the main reasons for the decline. Electricity from biomass makes up around one-fifth of German renewable power production but high costs (compared to other renewable sources) and land use as well as ecological concerns have resulted in reduced government support in recent years.

Now, Germany’s bioenergy sector was standing at a “tipping point”, Simone Peter, head of renewables association BEE, said at the same event, praising it as the renewable power source that thanks to its flexibility could cushion the effects of fluctuating input from solar and wind installations. The government has to make sure that 20 years of know-how and fully functional biogas plants weren’t going to waste, she added.
Their data showed that while biogas plants used to simply produce power continuously year-round until 2013, many of them have since become flexible and thus contributing to keeping the power system stable, Horst Seide explained. “As of 2019 we have a capacity of 5 gigawatts (GW) of stable electric power. We could increase this to 20 GW without needing any more land, but they have to let us,” he said. The reform of the EEG, which has been pushed to autumn 2020, has to make sure that biogas and biomethane plants will have a future in Germany, Seide stressed. Biomethane technology in particular, although currently suffering from the same adverse framework conditions as biogas plants, is needed in other areas such as hydrogen production, carbon capture and storage (CCS) and power storage, he said.

Germany’s EEG has been hailed as the main enabler of the country’s renewables boom over the past decades but several adjustments have seen support for bioenergy reduced. After 20 years of guaranteed payments to renewable installations under the law, many of these plants will see an end to the funding in the coming years with no plan for follow-up financing in sight. In order to help reach climate targets, the German government has set the goal of increasing the renewables share in power consumption to 65 percent by 2030 with the climate package decisions from September 2019. While the solar industry has seen a positive trend in recent months, wind power expansion slumped in 2019 due to regulatory hurdles and increased opposition.