Germany has triggered the first stage of its national gas supply emergency plan over fears that Russia might soon cut supplies if it doesn't receive payments from foreign buyers in roubles. The government called on all consumers to save energy and make existing supplies last longer, with gas storage levels currently running at 25 percent. The declaration of the "early warning" stage is a precautionary measure and supplies are safe for the time being, said economy minister Robert Habeck.

Germany has launched the "early warning" stage of its gas supply emergency plan to prepare for a potential stoppage of deliveries from Russia. The "early warning" is the first of three stages. It focuses on monitoring the situation but does not yet imply direct state intervention, economy minister Robert Habeck said, adding that the declaration would be a response to Russia's announcement that it will seek payment in roubles for gas.

Habeck said supplies were safeguarded for now, as all supply contracts were being fulfilled. He said triggering the emergency plan was about "prevention and precaution," adding that an emergency task force bringing together Germany's network regulator and network operators that is based at his ministry will meet on a daily basis.

"We are now in a situation where every kilowatt-hour that is not used helps," Habeck said. "Therefore, I would like to combine the declaration of the early warning stage with an appeal to private consumers and companies that they help us, that they help Germany, that they help Ukraine when they save gas, or energy altogether."

The G7 group of influential economies, currently led by the German presidency, have rejected Russia's demands to switch gas contract payments to roubles because this would undermine the sanctions imposed on the country in response to its attack on Ukraine. Poland has announced a ban on Russian coal as well as steps to end all oil imports from the country by the end of the year. The German government has strongly resisted calls for an immediate import ban on Russian energy over fears of the grave impact this could have on the economy.

Germany is heavily dependent on imports of Russian gas, oil and coal, but Habeck said the country had already reduced its reliance. "On average, we in Germany have imported 55 percent of our gas from Russia in recent years, and this has now gone down to 40 percent," Habeck said. 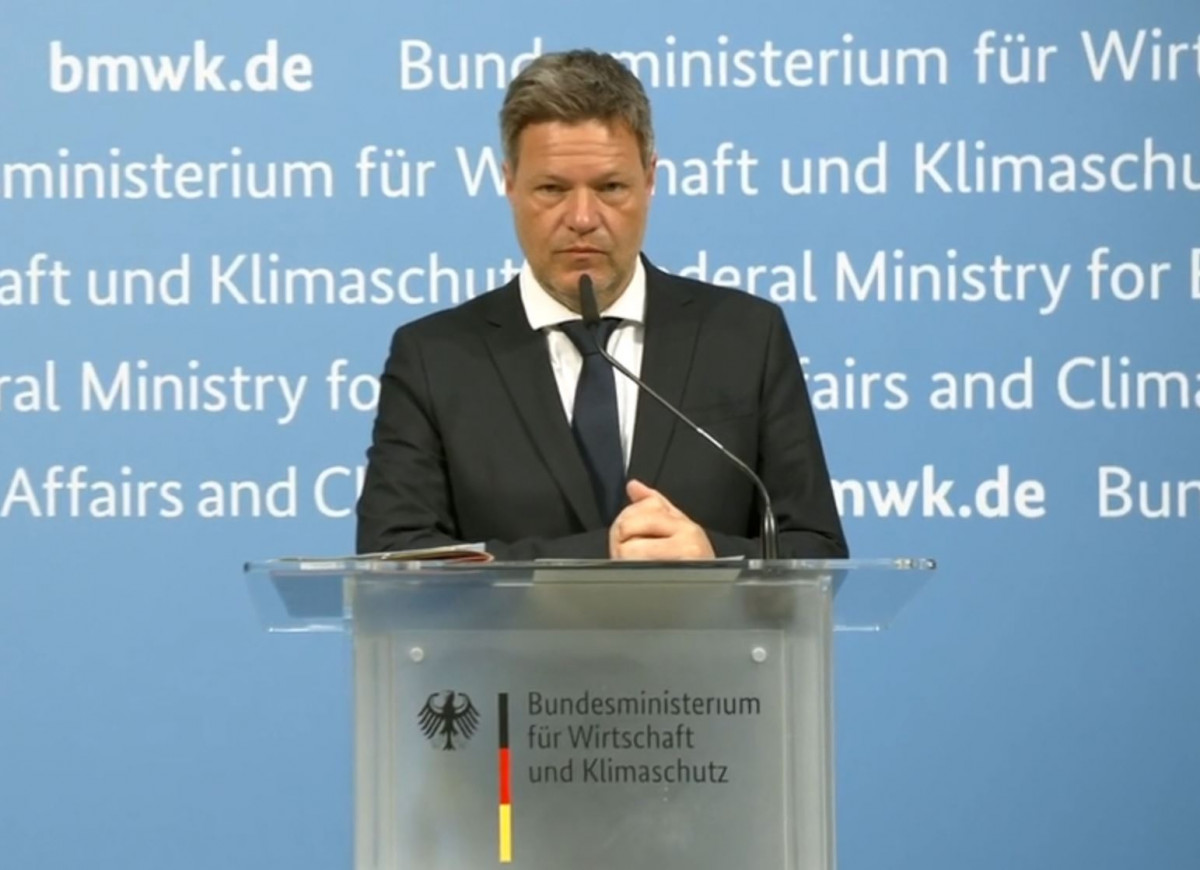 Economy and climate minister Robert Habeck during the announcement of the early warning.

The next stage of Germany's existing gas supply emergency plan is the "alert," which would be triggered by a serious disruption to gas supplies, but would still rely on market mechanisms to remedy the situation. It's only in the ultimate "emergency" stage that the state would directly intervene in the gas market to secure supply to "protected customers," such as private households, small businesses and hospitals - possibly at the expense of large industrial consumers.

Habeck said gas consumption, supplies of liquefied natural gas (LNG) from other European countries, the weather and many other factors will determine how long Germany's gas supply would last in case of a complete halt to Russian deliveries. Germany's gas storages are about 25 percent full at present, but capacity levels at the beginning of the coming winter will be more decisive, he said.

Germany's network regulator and the country's energy industry welcomed the declaration of the warning stage. "The aim is and will remain to prevent a deterioration of the gas supply in Germany and Europe via savings and additional purchases," the head of Germany's network regulator (BNetzA), Klaus Müller, said on Twitter. "The grid agency asks consumers and industry to contribute, and it will prepare for all scenarios."

Energy industry association BDEW called the government's announcement an important step. "There is no supply shortage yet, but we want to make preparations in case we get into a nationwide supply shortage situation and for this we need close communication between the parties involved." The lobby group had already called for triggering the alert last week.

Gas industry association Zukunft Gas said the risk of supply disruptions and shortfalls was very real because Russia's demand for payment in roubles would be "a clear breach" of the existing contracts, and companies would stick to those.

A complete halt of energy trading between Russia and the rest of Europe would likely have grave economic consequences for Germany and other EU countries, as the cascading effects in production and supply chains could lead to the collapse of entire markets, energy and security expert Kirsten Westphal told Clean Energy Wire in an interview this week.

"If Russian gas really stops flowing, it's possible that we enter a situation where markets simply stop functioning. I'm not sure that this scenario has fully dawned on companies or consumers," Westphal said. "It's not simply a question of comfort. This would affect the basic functioning of our economy and the energy system."