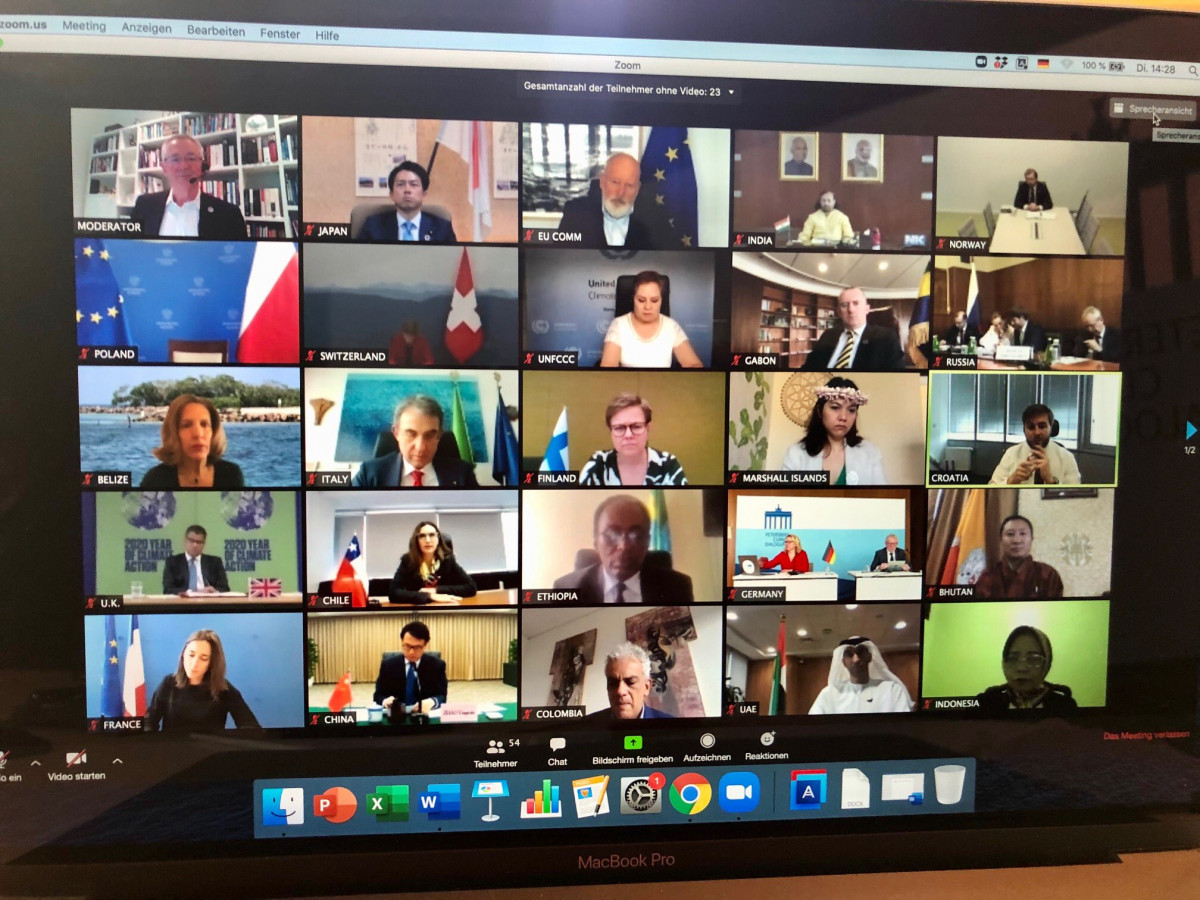 Due to the coronavirus crisis, this year's Petersberg Climate Dialogue was held as an online conference. Photo: BMU 2020.

German Chancellor Angela Merkel has said she welcomes the proposal by the European Commission to raise the bloc’s greenhouse gas reduction target for 2030 to between 50 and 55 percent. In her speech at the 11th Petersberg Climate Dialogue, held online, she strongly advocated for CO₂ pricing mechanisms within the EU, but also beyond. The chancellor and UN Secretary-General António Guterres reiterated that any coronavirus recovery programme should have a clear focus on climate targets. Environmental NGOs welcomed Merkel’s support for a more ambitious target, but said they had hoped for more concrete proposals on the path forward.

German Chancellor Angela Merkel has come out in favour of raising the European Union’s 2030 climate target to between 50 and 55 percent. In her speech at the digital Petersberg Climate Dialogue, Merkel said the European Commission had laid out the path to greenhouse gas neutrality by 2050 with the Green Deal. “We know it is going to be a long road and that is why I welcome the interim target proposal for the European Union to reduce emissions by 50 to 55 percent by 2030 over 1990 levels.”

The chancellor said a comprehensive package of measures, including investments in climate-friendly infrastructures and appropriate CO₂ pricing would be necessary. Merkel came out strongly in favour of carbon pricing during her speech. “I welcome the planned expansion of the EU emissions trade [EU ETS] to additional sectors,” she said, adding that it would be desirable to see as many countries around the world as possible bet on CO₂ pricing as well, as wide participation “is the best way to prevent distortion of competition”.

UN Secretary-General António Guterres encouraged the EU to “continue showing global leadership by presenting, by the end of the year, a Nationally Determined Contribution [NDC] in line with its commitment to become the first climate neutral continent by 2050”. In addition, Guterres called on all G20 member states to commit to carbon neutrality by 2050 as they are responsible for 80 percent of global emissions.

I am very pleased that Angela #Merkel today at #PCD11 welcomed the EU Commission's proposals for an NDC of -50 to -55%. Important tailwind for climate protection.

Kai Niebert, president of the environmental NGO umbrella association Deutscher Naturschutzring (DNR), welcomed Merkel’s support in raising the EU target as an “important signal in these tough times and a first step in the right direction”. Germany now has to use its EU Council presidency to push the implementation of the Green Deal, he added.

European Commission President Ursula von der Leyen – Germany’s former defence minister and a close Merkel ally – last year presented the framework of an ambitious and comprehensive economic plan to make the continent climate neutral by 2050 – the European Green Deal. This sparked hopes that the EU and Germany would make use of their pivotal roles to drive global climate ambition this year.

The annual Petersberg Climate Dialogue, organised by the German government and normally taking place in Berlin’s city centre, is seen as a key milestone in preparation for the next UN climate conference. As COP26 in Glasgow has been postponed to 2021, the high-level ministerial talks have provided an opportunity to amass political support for more ambitious climate action. Ministers of 30 states met online to debate how countries can proceed in this regard despite the postponement of the Glasgow climate conference, originally scheduled for November. Under the Paris Climate Agreement, many countries are supposed to raise their NDCs by the end of 2020, and the coronavirus crisis has intensified worries that some governments could show a lack of ambition.

Despite the current crisis, the German government decided to host the summit (digitally) because “climate change continues to exist, even if it is receiving less attention right now”, said environment minister Svenja Schulze. Germany and co-chair UK, which holds the COP26 presidency, have put the clear focus of this year’s edition on "sustainable recovery" in response to the coronavirus crisis.

Environment minister Svenja Schulze said today’s summit had shown that many countries are already preparing measures to boost the economy after the crisis and are keeping climate action and the protection of ecosystems in mind when doing so. The world needed a “new start” of the economy, said Schulze. “Our vision is not the old world, but a better world that is more crisis-proof and climate-friendly.”

The crisis will lead to a “difficult discussion about distribution”, Merkel said, cautioning that governments needed to make clear that they would not hold back on climate action in their paths out of the crisis. “If we look at the economic damages that the coronavirus crisis has caused in our respective budgets, the more important it will be to keep a firm eye on climate action when we introduce economic stimulus programmes.” She called for investments in future-proof technologies and following through on international commitments rather than countries focussing on themselves.

Guterres also called for a green recovery and said there was now a “rare and short window of opportunity to rebuild our world for the better”.

NGOs like Greenpeace International had called on Merkel – who has in the past been called the “climate chancellor” for her efforts in regard to international climate policy – to use today’s summit to make clear that now was the moment to “rebuild better”. While a number of big companies such as steelmaker ThyssenKrupp or chemicals firm Bayer also voiced support for a climate-friendly recovery package, Germany's industry association BDI cautioned against overburdening businesses hard-hit by the crisis. While businesses supported the goal of climate neutrality by 2050, the EU's 2030 interim targets needed re-assessment in the light of the crisis impact, BDI deputy managing director Holger Loesch told newspaper Handelsblatt.

Merkel disappointed some climate protection advocates who had expected a more concrete plan both for how German aims to contribute to reaching EU goals and how the government will use the EU Council presidency it holds during the second half of 2020 to influence European neighbours to do the same.

“We would have hoped for a concrete initiative from the government to develop a global vision of how the necessary economic revitalisation can be made climate-compatible,” said Jan Kowalzig, senior policy advisor on climate change at Oxfam Germany. He added that the chancellor would have a chance to put actions to her words about a green recovery at next week’s car industry summit and make clear that there will be no buyer’s premium for combustion engine cars.

Green Deal should be extended to Europe’s neighbours – development minister

Earlier in the day, support for the idea of a green recovery had come from economy minister Peter Altmaier. Ahead of a meeting with fellow energy ministers from other EU member states, he said the European Green Deal could become an important growth strategy if investments in new technologies led to the increased competitiveness of the EU. Altmaier pointed to the great potential in offshore wind projects, hydrogen, energy efficiency and heating with renewables. “Here, we can give a significant boost to the energy transition and ensure investments and economic growth at the same time.”

In a press release also earlier in the day, economic cooperation and development minister Gerd Müller said that the EU should not only focus on itself in the fight against the pandemic. In addition to the coronavirus emergency programme, the EU should also extend its Green Deal to Europe’s neighbours and African countries. The EU should “launch an ambitious investment and innovation package for the development of renewable energy in Africa”, said Müller.