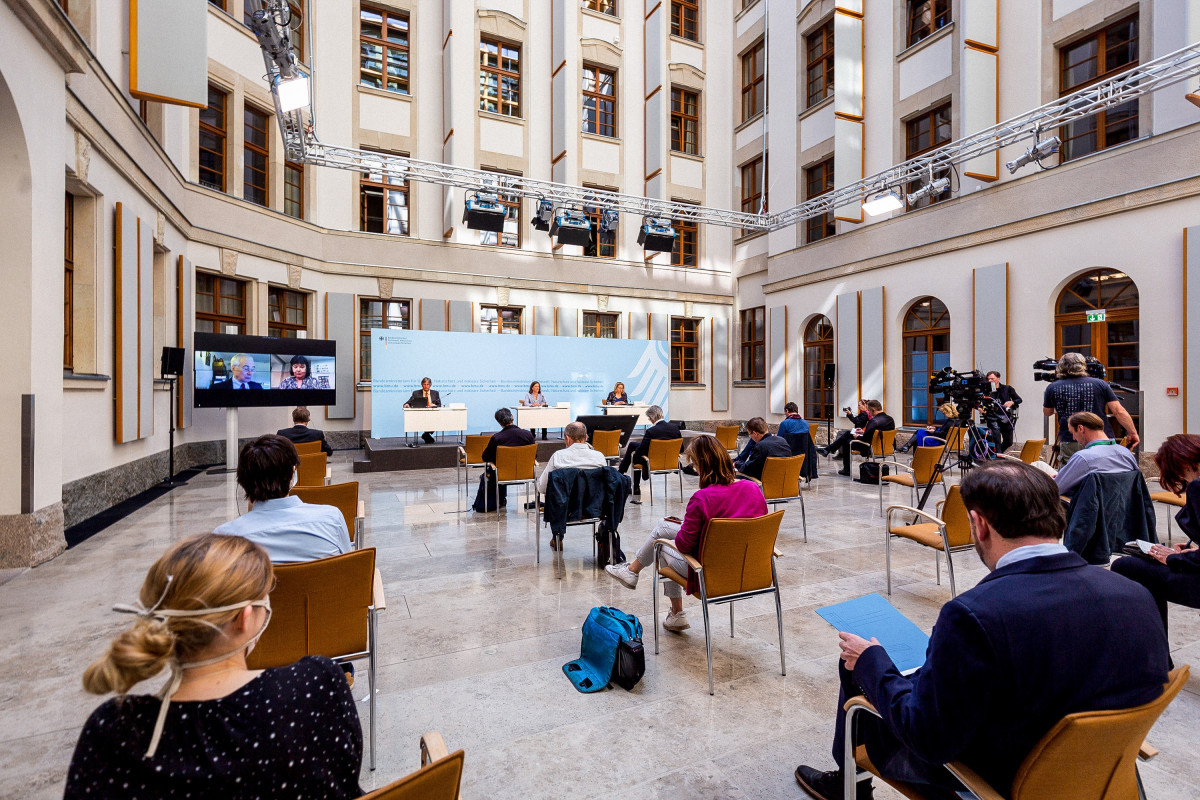 Top politicians from Germany and more than 60 large companies have warned that the climate crisis must continue to be a top priority, even as the world economies grapple with the impact of the coronavirus pandemic. Ahead of this week’s digital Petersberg Climate Dialogue, environment minister Svenja Schulze said the Paris Agreement should remain the “compass” for the economic recovery after the current crisis. Chancellor Angela Merkel made clear that climate action would continue to play an important role during the German EU Council presidency and pointed to the current dry spell in the country. In a joint statement, companies from all sectors called for making the economy more resilient with a climate-friendly stimulus programme.

German environment minister Svenja Schulze, Chancellor Angela Merkel and Wolfgang Schäuble, the president of the country's parliament, have cautioned that any recovery after the coronavirus pandemic should happen in a sustainable, future-proof and climate-friendly way.

Schulze called for an intensive exchange between governments across the globe on restarting the economies after the pandemic in a press conference preceding the Petersberg Climate Dialogue (PCD), an annual ministerial summit organised by the German government in preparation for the coming UN climate conference.

“The Paris Climate Agreement, which shows the way into a climate-neutral world, should continue to be our compass to modernise our economies and make them more climate-friendly and thus secure jobs,” said Schulze. “And unlike with the coronavirus we already know the ‘vaccines’ against the climate crisis.” As an example the minister said funds should be invested in alternative mobility instead of the combustion engine. People across the globe currently have a sense of what a crisis feels like, she said. “I trust that an increasing number will be ready to do more against the long-term environmental risks, the climate crisis and the destruction of eco-systems.”

Calls and proposals for economic stimulus packages with a focus on sustainable and climate-friendly measures have been growing over the past weeks. German politicians and national and international NGOs have called on Chancellor Merkel to use her speech at the PCD on Tuesday to make clear that now is the moment for a green recovery.

Over the weekend, Merkel said in her weekly podcast that a European recovery programme must be tied to the EU budget, with Germany “contributing much more”, reiterating earlier statements. This was to ensure that, among other things, “we can invest in the future, and that means in climate action – the [European] Commission has developed the Green Deal – and in digitalisation.”

Schäuble also joined in the green recovery chorus. The pandemic is not the only major problem, he told Tagesspiegel, but also “climate change, the loss of biodiversity, and all the damages humans and in particular us Europeans cause nature”. The former finance minister said he hoped for recovery measures that do not just let the industry carry on as before, citing the scrappage premium for older cars as an example. After the pandemic the big question will be “how do we get to a more sustainable and […] restrained life in economy and society? How can we reduce the differences in the world so that they are bearable”?

The Green Party, meanwhile, has come out with its first proposals for the recovery. In an op-ed in Frankfurter Allgemeine Zeitung, party heads Annalena Baerbock and Robert Habeck call for reducing the renewables levy by 75 percent, and for direct financial support for other measures, such as establishing a hydrogen economy.

In her podcast, Merkel said the coronavirus crisis would certainly leave its mark on the German EU Council presidency in the second half of 2020. “That means we have to do something to strengthen Europe’s economy, social cohesion and think about the future – and that means climate and environmental questions,” said Merkel. “We will have the climate issues on our agenda just like we will have the health issues.”

The chancellor added that already today the lack of rain in many parts of Germany was apparent. Bloomberg reported that as the country was likely experiencing the driest April since records began, the important Rhine River marine transport route was drying out, prompting concerns that key industrial goods might have trouble making it to their destination. The river is now at its lowest level for April since 2011, wrote Bloomberg.

Gerhard Adrian, president of Germany's National Meteorological Service (DWD), told news agency dpa that climate action should not be left behind as the coronavirus crisis takes centre stage. “It would be bad if climate action was put on hold over the fight against the virus.” If economic systems had to change to effectively reduce greenhouse gas emissions, economic stimulus packages related to the coronavirus crisis would be an opportunity to do both at the same time, he said.

Merkel also said Germany would push a discussion on joint emissions trading for marine transport and aviation. Overall, she said the goal was “to have, by the end of the German presidency, more Europe, and a Europe that is better equipped to face the 21st century than it is today”.

„The GER EU Council Presidency will require a huge effort. High expectations on Germany taking on the leading role as an honest broker. We have to tackle #Covid19 as well as climate change, future relation with UK, digitalization & the EU budget.“ @HeikoMaas pic.twitter.com/63LRdWNNMM

Ahead of the climate summit’s kick-off today, an alliance of more than 60 large German and international companies – including ThyssenKrupp, Bayer and Vattenfall – called on governments to introduce climate-friendly, long-term economic stimulus programmes. In a joint statement organised by business initiative Foundation 2° (Stiftung 2°), the companies call on the German government to closely link measures to overcome the coronavirus crisis and the climate crisis, stick to existing climate policy to not endanger investments and projects already made, and push the European Green Deal as an innovation and growth strategy. “The German government should work with all member states of the European Union to assure that the there is no turning back from European climate policy,” said Foundation 2° managing director Sabine Nallinger in a press release.

Oliver Geden, head of the EU research division at the German Institute for International and Security Affairs (SWP), said the statement was a “prime example of ‘constructive ambiguity’ in PR.” In a message on Twitter, he criticised the statement for not saying anything concrete on setting new EU and German climate targets, noting that it talked about policy only in the broadest sense.

In regards to the Petersberg Climate Dialogue, Geden said it was an “important vital sign of climate diplomacy”, but added that the impact of online meetings was limited. “To work out political compromises, the direct contact among negotiators is necessary.”

At the press conference, Schulze once again came out in favour of raising the EU’s 2030 climate target to a 50-55 percent reduction in greenhouse gases, as proposed by the European Commission. “If you want to become climate-neutral by 2050, then you cannot reach that with the existing 2030 interim target of a 40 percent reduction,” Schulze said, but acknowledged that this was not yet a coordinated German government view.

Geden pointed out that the “tough negotiations” on the EU level would start during the German Council presidency. Whether they could be finalised in 2020 will depend on Merkel's negotiating skills, he added. “Merkel is therefore unlikely to commit herself publicly to a concrete reduction corridor at the Petersberg Climate Dialogue.”

At the press conference ahead of the PCD, British economist Nicholas Stern, chair of the Grantham Research Institute on Climate Change and the Environment at LSE, warned that the world should not go back to the fragile economic systems that existed before the crisis and face up to the risk of a global recession. “There can be no going back, we have to rule out austerity and the most dangerous recovery of all would be a futile attempt at a brown recovery.” Stern also said that the dangers involved in climate change were “still bigger than the dreadful crisis that we’re experiencing from COVID. If we let the climate get out of control, they would last a very long time, centuries.”

Stern called for a programme “similar to the Marshall Plan”, but for the entire world and in a “much bigger scope”. “There is only one feasible way forward and that’s to build a much greener, more environmentally-friendly and more equitable economy,” said Stern. There is a lot the world could do on energy efficiency, building e-mobility and rail programmes and infrastructure, redesigning cities, and looking after the natural capital such as forests and land, he noted. “There is so much we can do quickly.”