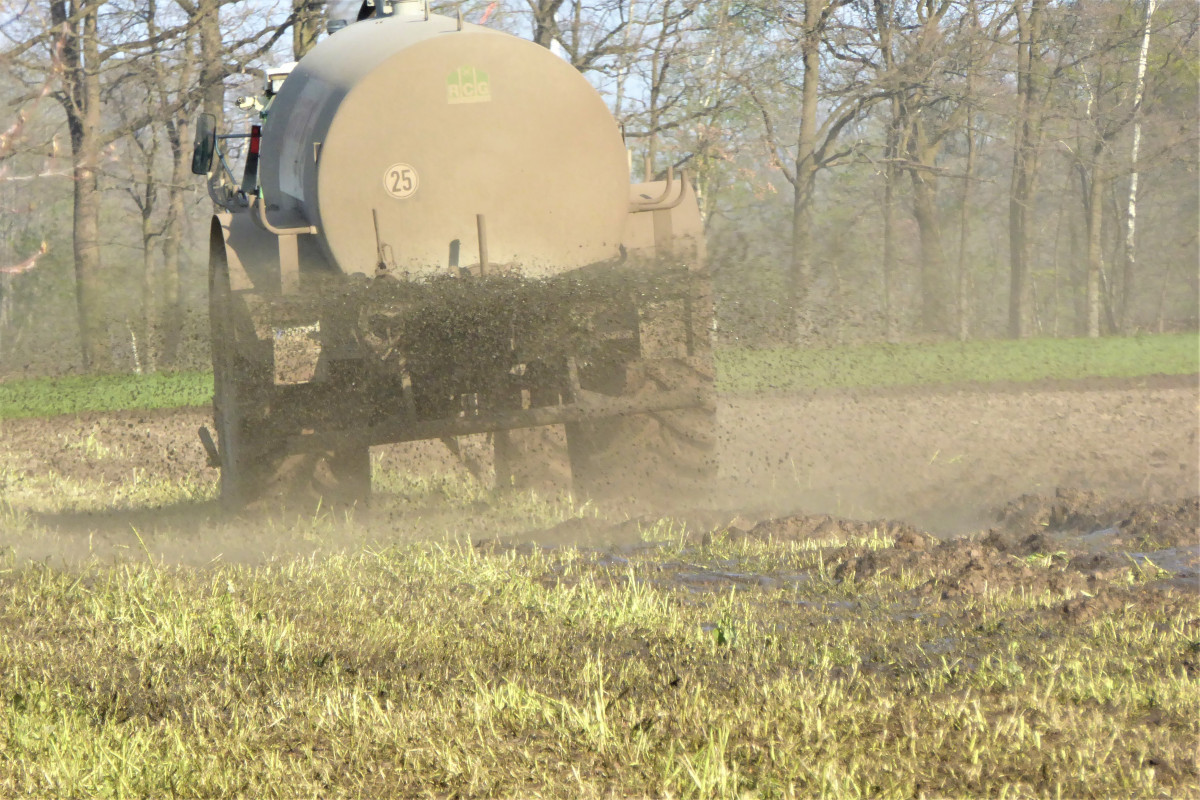 Germany will spend over 40 percent of the farming subsidies it expects to receive from the EU on climate, biodiversity and other sustainability-related practices, the country’s 16 state agriculture ministers have agreed after 33 hours of intense negotiations. Their unanimous decision forces the federal agriculture ministry to include more ambitious figures in its legislation for the next funding period of the Common Agricultural Policy (CAP). But experts say that only the minute details of the eco-schemes and other measures will determine whether the money would make a difference for greenhouse gas emissions from the sector.

By 2027, 47 percent of the subsidies Germany receives for its farming sector from the European Union will be tied to environment or climate measures, the country’s 16 state agriculture ministers have decided. After having been teased and taunted for failing to decide in previous meetings how the six billion euros that Germany receives per year under the EU’s Common Agricultural Policy (CAP) should be spent, the ministers finally reached a unanimous decision. It foresees more ambitious environmental and climate spending than what had been proposed by federal agriculture minister Julia Klöckner (CDU).

The Conference of Agriculture Ministers (AMK) decided that 25 percent of the money available in the first pillar of the CAP (direct payments to farmers according to the size of their land) will be dedicated to so-called eco-schemes – voluntary measures, such as the increase of non-productive areas, agroforestry systems or flowering strips. They also increased the amount of money that will be shifted from the first pillar to the second funding pillar for rural development: in 2023, this will amount to 10 percent and increase to 15 percent in 2026 (the current level is six percent). Other climate-relevant measures are a mandatory five percent share of non-productive areas for all recipients of direct payments under the CAP and the use of two percent of the money for premiums of free-ranging sheep, goats and suckler cows.

“We currently have a system that all actors are unhappy with: consumers, farmers, environmental and climate activists. Now we are complying with our political mandate, for which the EU’s Farm to Fork strategy and the Green Deal have set a tough framework,” Saxony’s agriculture minister Wolfram Günther (Green Party) said at a press conference.

Together with other measures, a total of 47 percent of the money Germany receives for farming subsidies under the CAP are to be tied to environment or climate-relevant measures or farming practices by the end of 2026. In total, Germany will spend 3.5 billion out of an annual allowance of about 6 billion euros of CAP money on sustainability, the AMK said.

The federal ministry’s suggestion for CAP money distribution had included spending 35 percent of funds for services that benefit the environment and climate. Klöckner, who had blamed the state ministers from the Green Party for blocking a compromise, said the result would demand a lot from farmers. “They are prepared to go along with the system change as long as ecology and economy and the social elements remain in harmony,” she said.

Greenhouse gas emissions from the German farming sector amounted to 66.4 million tonnes of CO2  equivalents in 2020 and have been reduced by around 24 percent since 1990. According to the country's Climate Action Law, they will have to fall to 58 million tonnes by 2030. So far, emission reductions from the sector can largely be attributed to structural change (i.e. many farmers pulling out of business, smaller animal herds). Designated environmental measures, such as the greening measures under the previous CAP, on the other hand have not had much impact, evaluators have found. 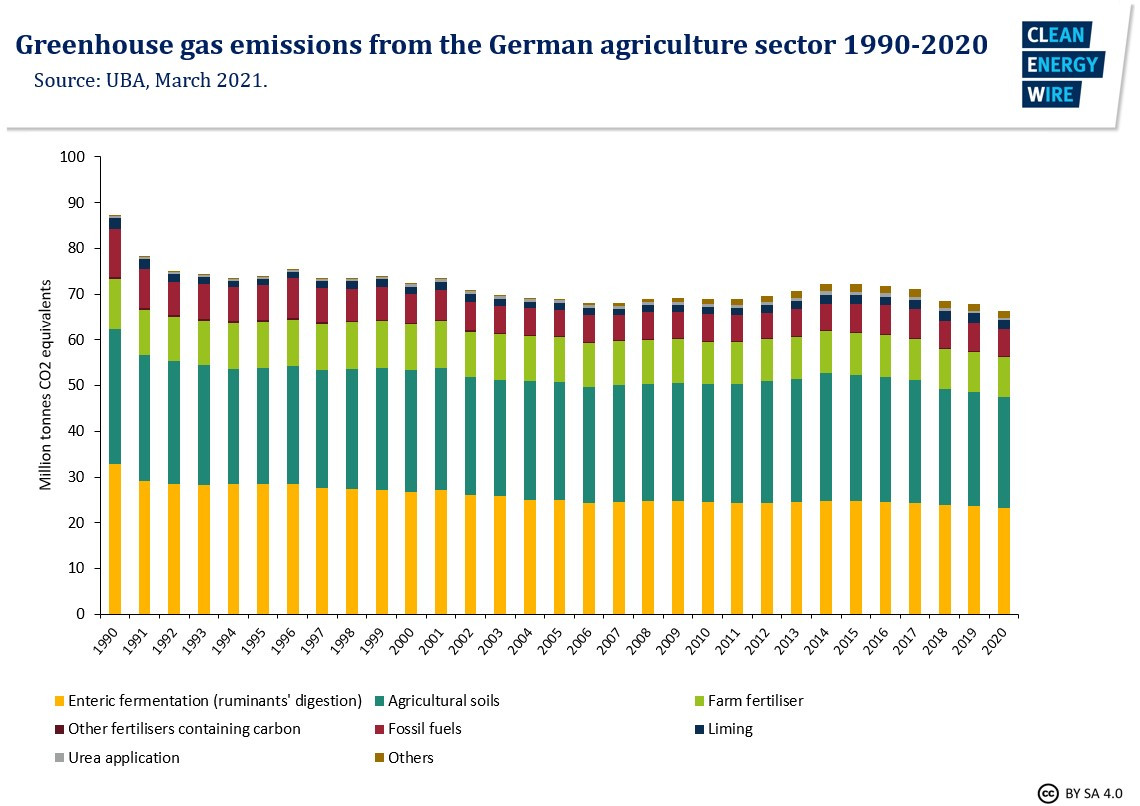 Those who wanted a more ambitious approach to climate and environmental spending in the farming sector had prevailed, Sebastian Lakner, professor of agricultural economics at the University of Rostock, told Clean Energy Wire after the ministers had published their decision. The shifting of 15 percent of pillar 1 funding to the part of the CAP budget that is used for agri-environmental goals and animal welfare is “financially significant”, he said.

Positive climate impacts can be achieved through pillar 2 funding, for example through rewetting or protection of moorlands and permanent pastures, while benefits from the eco-schemes in the first pillar are harder to pin down. Lakner said the difficulty lies in designing eco-schemes that maximise climate and environmental benefits and are also attractive to farmers. “The decision has opened multiple opportunities, but these now have to be seized and for now nothing is in the bag.”

“The decision has opened multiple opportunities, but these now have to be seized and for now nothing is in the bag.”

Sascha Müller-Kraenner, executive director of Environmental Action Germany (DUH), agreed, saying: “Priority should be given to climate, species, soil and water protection, air pollution control and pasture management in the context of animal welfare. It is the design of the eco-schemes that determines their environmental impact."

The federal agriculture ministry had proposed a list of eco-schemes in its CAP bills but the 16 state ministers have so far only agreed on a shortened list of key points for eco-schemes and will have to discuss the issue further, Saxony’s Günther said.

Germany’s largest farmers’ association DBV lamented the “painful cuts” to agricultural support and the “massive reallocation” of funds from the first to the second pillar “without any real guarantee that these funds will actually flow to farmers.” “These harsh cuts can at best be mitigated if the design of the eco-schemes and agri-environmental measures in the second pillar ensures that the reallocated funds actually reach farmers,” DBV president Joachim Rukwied said in a press release.

Meanwhile, Andreas Krüger, president of the Nature and Biodiversity Conservation Union (NABU), said the NGO had doubts whether the decisions would “accelerate the transformation of the agriculture sector appropriately.” The NABU had wished for more money both for eco-schemes and for the second pillar and a ten-percent-share obligation for fallow land. And Martin Schulz, chairman of farmers’ association AbL said that limiting eco-scheme funding to 25 percent rather than allowing it to increase dynamically has “left farmers alone with the growing challenges of nature and climate protection.”

“It is no longer the mere ownership of land that is subsidised, but the way the land is treated.”

Klöckner reiterated that the decisions taken for the next CAP funding period (2023-2027) signalled considerable change: “Every euro of subsidy from Brussels is tied to environmental requirements. This means that it is no longer the mere ownership of land that is subsidised, but the way the land is treated.”

Many actors are, however, wary of this catchphrase, saying that the principle of farmers’ societal and environmental obligations has existed for almost two decades and no tangible results with regard to greenhouse gas emissions, environmental standards or farmers’ livelihoods have been recorded. AbL’s Schulz said “Despite the first tentative steps, the state agriculture ministers failed to initiate the necessary systemic change. In order to secure EU funds for farmers in the long term, a fundamental departure from the largely unqualified area payment would have been necessary." Reinhild Benning, senior agriculture advisor at DUH, said that a new accounting system, which awards money according to performance, would have been necessary to achieve real change.

Ball back in cabinet’s and EU’s courts

With the 16 states’ unanimous decision, federal minister Klöckner will now make changes to her draft of the next CAP legislation and the CAP strategic plan, which all member states have to present to the European Commission by January 2022. Klöckner said she was confident that the other federal ministries and the government would be able to confirm the bill in the coming weeks. Environment minister Svenja Schulze (SPD), who had criticised Klöckner publicly for her unambitious draft law, said she was happy that the states had presented something that “goes well beyond the inadequate environmental level of the proposals by the agriculture ministry” and said her department would now examine whether the “money is being used to fund efficient measures.” “In the next funding period, this system change must overcome the current practice of ecologically blind direct payments per hectare and transform it into a consistent reward for environmental and public welfare services provided by agriculture,” she said in an emailed statement.

"It is gratifying that the state ministers go well beyond the inadequate environmental level of the proposals by the agriculture ministry."

Klöckner said the state ministers had found a sensible common ground by ringfencing 25 percent of the pillar 1 funds for eco-schemes. “It is realistic that the same compromise can be reached at EU level,” she said. Although member states are already in the process of writing their CAP strategic plans, detailing how they will use the money as of 2023 and what eco-schemes they want to establish, the CAP framework has not yet been decided by EU legislators. Last week, negotiators from the European Commission, the European Parliament and the EU Council of agriculture ministers of the member states made some headway in a “super trilogue” discussion.

“We shouldn’t expect a big impact from the outcome in Brussels,” Lakner said. The changes to the Commission's CAP proposal suggested by the Council but even more so by Parliament had softened ambitions. Both on a European and a German level, important standards for good farming practices that apply to all farmers still had to be filled with details. “For example, in the context of the protection and treatment of wetlands and wet grasslands, if we want effective climate action in the farming sector, we need to protect moorlands,” he said.

More trilogue negotiations are planned before the end of April and the Portuguese Council presidency has said it remains confident that the CAP will be done and dusted by summer 2021.