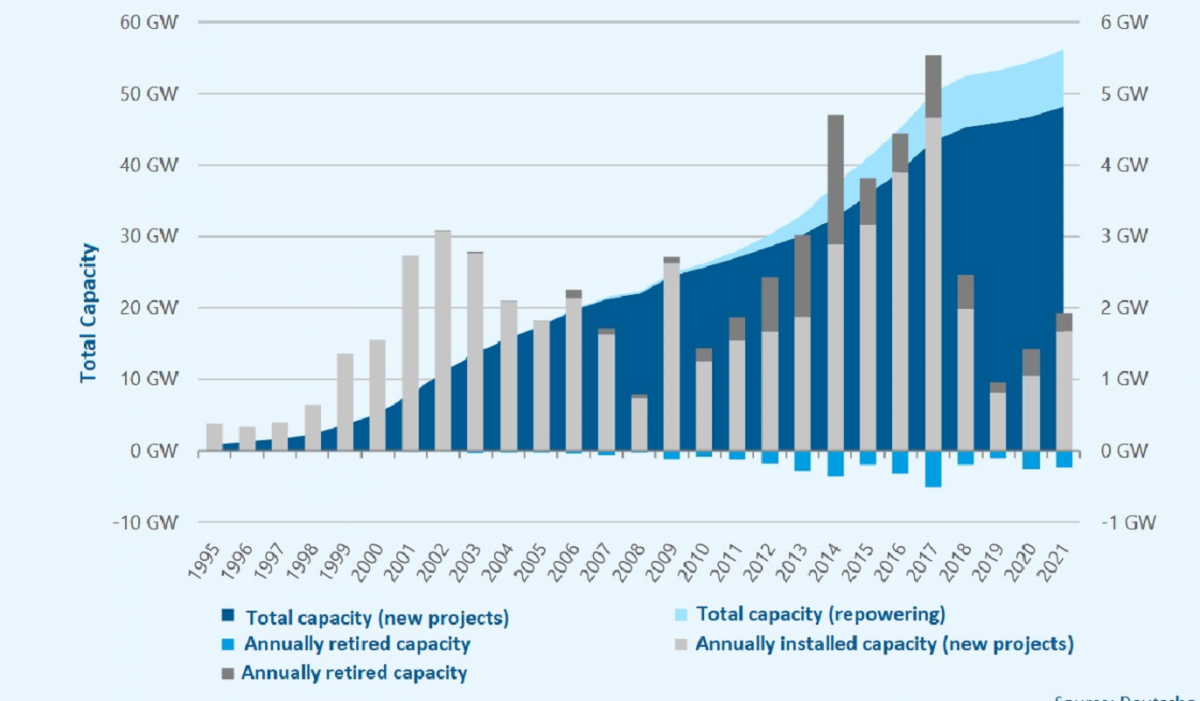 Germany's onshore wind power capacity is recovering from years of depressed expansion, but is still not close to levels necessary for the country’s renewables targets for 2030, the country's wind power industry said in its annual stocktaking. However, industry representatives welcomed the new government’s ambitious announcements to speed up the construction of new turbines. At his first official visit to Bavaria, economy and climate minister Robert Habeck said the laggard state in wind power expansion would have to prove it will ensure sufficient buildout if it wans to stick to its strict minimum distance rules.

The expansion of onshore wind power in Germany was at the same level as ten years ago in 2021, a clear recovery from the slump after 2017 but still far off from the level needed to reach the new government's ambitious 2030 renewable power targets, the country’s wind industry said at its annual stocktaking.

A total of 484 onshore turbines with a combined capacity of almost two gigawatts (GW) were added last year, an increase of about one-third compared to 2020, bringing the country’s total capacity to 56 GW. A lack of designated construction areas, slow licensing procedures, and bottlenecks in staff numbers and transport capacities were among the reasons wind power expansion remained below required levels, the industry associations VDMA and BWE said.

“The current buildout is insufficient,” VDMA’s Dennis Rendschmidt said, adding that power supply security hinges on a faster expansion of Germany’s most important renewable power source. The new government with economy and climate minister Robert Habeck would be right to make faster expansion a priority, Rendschmidt said, arguing that the provision of adequate construction areas, lower bureaucratic hurdles and higher auction volumes all would be needed to achieve this goal.

The industry could deliver the number of turbines needed to reach the government’s climate targets, he said, adding that better transport conditions for bulky turbine components and a secure supply of skilled workers from across Europe and beyond are needed to succeed.

Faced with a “drastic backlog” of too-high emissions left by the previous government, the new German leadership has announced increased onshore wind power expansion as a key element for reaching its climate targets. Among other things, the government said that the volume of renewable power auctions will be increased with a reform of the Renewable Energy Act (EEG).

BWE head Hermann Albers said the 2021 figures could be seen as a “closing balance” of the previous government and the ad-hoc measures to boost expansion that federal economy and climate minister Robert Habeck had announced should take effect quickly. “Two percent of each state’s land area is a necessary minimum for wind power expansion. We must make sure no state dodges this responsibility,” Albers said, arguing that newly built turbines were distributed very unequally across the country. A “golden key” measure to reach the spatial and capacity targets would be repowering with new turbines at existing locations, which is still not getting enough attention. The goal must be a tripling of capacity expansion figures, he added.

The southern German state of Bavaria has been accused of having implemented regulation which halted wind expansion with its controversial "10H" rule. It stipulates that new turbines must be constructed at a distance from residential areas that equals at least ten times their own height, a very strict standard that has been critcised heavily by Bavarian industry for hampering the state's energy security and competitiveness.

The government of Bavaria will have to prove with a “reliable scenario” that sufficient wind power capacity can be built in the state over the coming years if it wants to keep its strict 10H distance rule, minister Habeck said at his first official visit to Bavaria's conservative CSU state premier, Markus Söder. “If it is possible to still get wind power going, that's fine with me,” the minister said. “We need ecological patriotism in the expansion of difficult technologies like wind power,” the minister added with a view to renewables expansion across the country.

Habeck and Söder agreed that Bavaria’s government has until March to explain how expansion could be revived. Söder said the current rules are not the main reason that expansion has come to a standstill and the state aims to stick to them. However, Bavaria is pondering exemptions, for example for forest areas or for repowering of older turbines.

Industry welcomes government focus on speeding up planning and permitting

The average turbine currently takes four years from construction application until the start of operation, the wind industry groups said at their stocktaking. About 10 GW of turbine capacity is held up in licensing processes and easing regulations could immediately bring up to five GW back on track towards construction, they added.

The groups said the new government’s approach to give renewables construction priority over other environmental aspects would be a positive development. “The two must not be pitted against each other,” the associations said, arguing that “climate action is also environmental action.” Furthermore, citizen acceptance needs to be addressed better, the groups said, advocating a mandatory profit-sharing with neighbouring communities. For 2022, the industry expects an expansion of roughly 2.5 GW before measures initiated by the new government can take effect next year.