Factsheet
Offshore wind power is set to play a growing role in Germany’s energy transition, with productivity outperforming expectations and prices down to unprecedentedly low levels in the first auction. But the giant turbines also pose a dilemma for conservationists, who generally support the country’s Energiewende – Germany’s energy transition from fossil and nuclear to renewable sources – since more and more construction is taking place in the fragile habitats of marine species. Licensing regulations are meant to ensure the impact on whales, sea birds and other wildlife is kept moderate, but critics say they have already been brushed aside in the past.

Offshore wind power has the potential to make a big contribution to the success of Germany’s attempt to fully replace its power supply from fossil sources to renewables. With the weather conditions at sea, where strong winds constantly blow on the water’s surface on most of the days of the year, and the technology rapidly becoming cheaper, hopes are springing that offshore wind turbines alone could cover well over 12 percent of the power consumption of the world’s fourth largest economy by 2030 – meaning that the number of turbines would have to rise considerably from the roughly 1,200 in operation at the end of 2017.

According to current government plans, the installed capacity in 2030 will be about 15 gigawatts (GW), equalling between 2,500 and 3,000 turbines - and wind power organisations are lobbying to increase their number even faster. While offshore wind is part of a bid to reduce the environmental impact of economic activity, such a rapid growth in the number of industrial-scale installations in Germany’s portion of the North Sea and the Baltic would not remain without consequences for local ecosystems. Both the Baltic in the east and especially the North Sea in the west are already among the most heavily utilised stretches of the sea worldwide, but also home to many protected species and conservation areas, such as the Wadden Sea on the German coast.

Building wind turbines far away from the shores also means investors do not have to deal with sceptical and protesting residents. But environmental organisations have begun to weigh in with a difficult balancing act of defending the intactness of marine wildlife while not thwarting the Energiewende.

Expansion goals: Number of turbines set to triple by 2030

Environmental organisation NABU says the Energiewende at sea can only be sustainable if prudent spatial planning is paired with innovative technologies. “Offshore wind power has to be part of the solution. But mistakes have been made early on in the planning stages by accepting projects in areas where they cannot be implemented sustainably,” says Kim Detloff, NABU expert for ocean protection.

The construction of the towering turbines that weigh up to 1,000 tonnes, span 150 metres across and rest on giant foundations reaching 20 metres into the seabed, puts a strain on sensitive species, such as porpoises and dolphins, NABU says. Ramming the turbine fundaments into the soil can cause very loud noises in surrounding areas as sound waves under water spread much further than they do in the air. Monopiles, a fundament type that especially requires heavy ramming, are the predominant model for German offshore turbines, comprising 98 percent of all turbines added in 2017, the German Wind Energy Association (BWE) says. 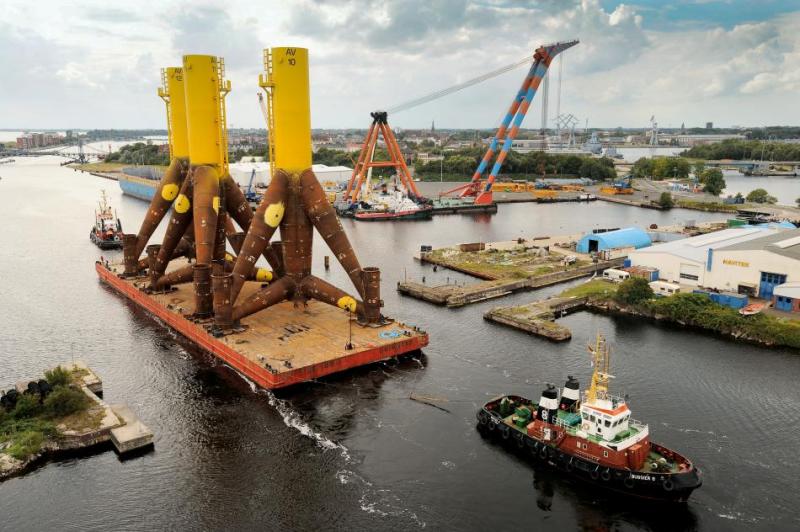 But also operation and maintenance of the installations are potential stress factors for the ecosystem and impact seabirds, fish and soil-dwelling animals. Detloff says the turbine’s adverse effects warrant a careful approach for expanding Germany’s offshore wind power capacity. “This cannot happen without limitations and it cannot happen anywhere,” he says. “It’s quite short-sighted to just say ‘let’s do it out there so we won’t have any trouble with local residents’. We can’t just turn the sea into an industrial zone.

Environmental organisation Friends of the Earth (BUND) says offshore wind power effects "could be grave and even lead to the extinction of individual species. But things could also not be that bad after all," BUND says. "We simply do not know yet," the organisation warns, adding that thorough examination is necessary before more wind farms are built.

In order to minimise visibility from the land, German offshore wind farms are mostly built far away from the shore, at an average distance of over 60 kilometres in a water depth of about 30 metres, according to the BWE. Construction work there, in Germany’s maritime exclusive economic zone (EEZ) past the 12 nautical mile-zone from the coast, has to be approved by the Federal Maritime and Hydrographic Agency (BSH).

Government plans stipulate to triple the 2017 capacity by 2030 and the agency estimates that ultimately up to 15 percent of Germany’s North Sea area could be needed for developing offshore wind power. More than 70 percent of Europe’s total offshore turbine capacity is located in the sea bordered also by Denmark, Norway, the UK and the Netherlands, according to industry association Wind Europe. It estimates that the total capacity in the North Sea could grow to nearly 50 GW by 2030.

Germany’s Federal Network Agency (BNetzA) identifies the areas that will be designated for offshore wind power auctions. It also carries out a so-called environmental compatibility assessment. But the BSH is in charge of approving the clusters, corridors and general planning principles. The agency is supposed to ensure that the wind farm clusters do not interfere with shipping lanes, fishing zones, conservation or military areas and. According to the BSH’s offshore plan, Germany’s EEZ can host over 20 GW of capacity, more than the outptut of a dozen large coal or nuclear plants.

The government introduced the Offshore Wind Energy Act (WindSeeG) in 2017 that contains a new site development plan for German territorial waters and which is open for input from all stakeholders, including environmental organisations, according to the BSH. It is meant to optimise the use of Germany’s comparatively small portion of the ocean and stipulates that “dangers to the marine environment” offset offshore wind energy expansion goals if in conflict.

The Schutzgemeinschaft Deutsche Nordseeküste, an association of local municipalities and other organisations, in the past criticised spatial planning of the “large-scale industrialisation of the North Sea and the Baltic,” saying it lacked a plan that adequately considered possible dangers. In particular, the association says that no coherent precautions are in place to minimise the risk of a collision between adrift vessels. A collision between an oil tanker, such as the ship Glory Amsterdam that drifted about for over ten hours in a storm before running aground in late 2017, and a turbine in a wind farm where hundreds of the installations stand side by side could lead to severe environmental damage. 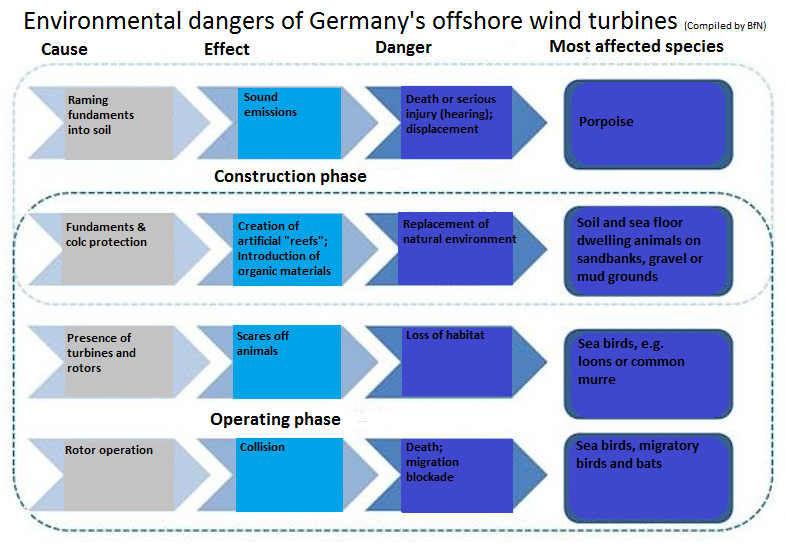 The Federal Agency for Nature Conservation (BfN), which is tasked with evaluating these dangers when planning new construction sites, generally confirms the concerns of environmental organisations that offshore wind farm construction and operation could “sometimes substantially” harm marine wildlife. Seabirds might lose resting and feeding habitats and are at risk of colliding with turbine blades. Animals in the water, such as the porpoise, a small whale species that especially in the Baltic grapples with dwindling stock numbers, can be gravely irritated by underwater sound waves that result from ramming the turbines’ pile foundations into the ground, the BfN says.

Biologist Anika Beiersdorf of the BSH says progress in construction techniques has greatly reduced noise emissions during the installation of turbine fundaments. Sound suppressors, protective shells and bubble curtains around the construction site could dampen sound waves to a large extent, especially if a combination of different methods is used and the water is not too deep. “However, further solutions to protect marine mammals need to be found for fundaments that are placed in a depth of up to 40 metres,” she says.

In a report on porpoise protection measures, the BfN states that sound emissions from ramming works “can be reduced but usually not be avoided.” And monopile fundaments, which require ramming, are going to be the “indispensable” model for the foreseeable future, the BfN says. Bubble curtains are a quite effective method to reduce emissions but construction in deeper water means that obeying limit values “cannot be guaranteed.”

The licensing agency BSH in the end draws on evaluations made by the BfN as well as on input by investors, grid operators, shipping, energy, environment and other associations before it decides on the final license that also stipulates construction deadlines and sound limit values. In its latest environment report, the BSH says “there currently exists no knowledge about substantial effects on the marine environment” caused by offshore wind turbines.

Potential effects are “small-scale and mostly temporary” as they occur only in the construction phase. The government agency adds that adverse effects on the environment would be much greater if the plan to expand Germany’s low-carbon energy production with offshore wind is not pursued.

According to environmental organisation NABU, the environmental standards that apply for turbine construction have been violated frequently in the past. A legal opinion commissioned by NABU says licenses had been issued without properly applying EU directives on bird protection and other environmental considerations. The wind farm Butendiek, consisting of 80 turbines built in 2014 about 30 kilometres west from the island Sylt, is “especially disputed” and an “original sin” that puts a burden on the development of offshore wind power as a whole and should never have been built, the organisation says.

The Butendiek farm is located at Sylt’s outer reef between two nature reserves and according to NABU undermines legal provisions meant to ensure safe migration paths for animals between them. According to NABU’s Kim Detloff, migratory birds have to avoid the turbines by nearly 20 kilometres, meaning their journeys are expanded considerably. The area also is an important nursery ground for the North Sea’s porpoise population, according the organisation. Whale calves are especially at risk of suffering damage to their hearing if sound emissions from turbine construction reach 200 decibel, it adds.

Butendiek’s operators state that all relevant environmental standards were respected in the farm’s planning. But Detloff argues the impact on species in the protected areas “basically rules out construction near nature reserves. We know quite well where these endangered animals dwell and there are in fact several regions where construction is less harmful than in others.” Calls for expanding German offshore wind power production to up to 50 GW had to be resisted, he says. “Otherwise Germany just waves goodbye to its pledges on marine conservation.”

Detloff says conservationists must not deceive themselves when it comes to offshore wind power. “We cannot roll out regenerative energy sources without any negative effects whatsoever. They are an integral part of it.” He also warns of the misuse of climate protection as a blank cheque for installing industrial plants at sea. “Offshore wind power companies equally wish to increase their market size and have secure production perspectives,” he adds. 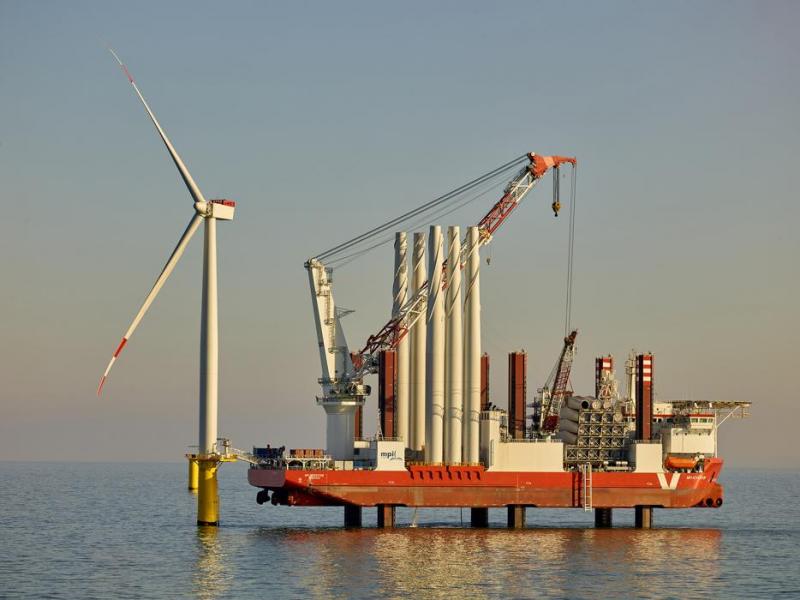