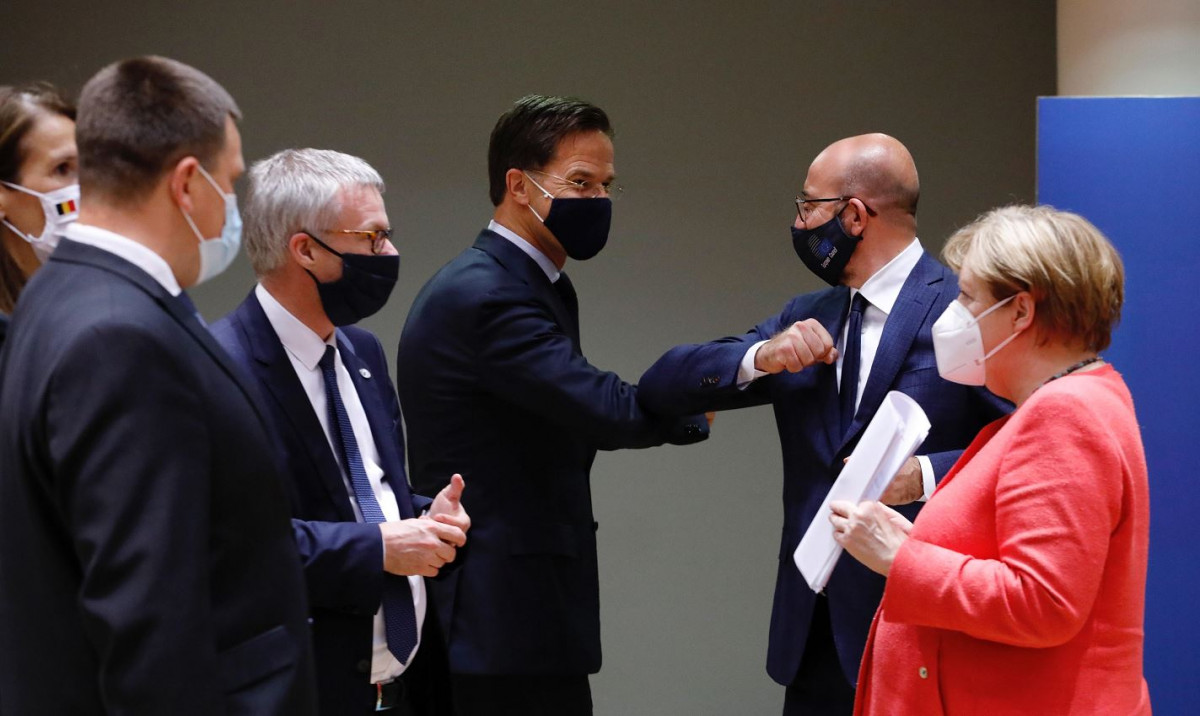 After four days of negotiations, the EU member states have agreed on an unprecedented funding package to cushion the effects of the coronavirus pandemic and secure the bloc's budget until 2027. The 27 governments greenlighted a pandemic recovery programme worth 750 billion euros and a general budget of more than one trillion euros, with about one third of the expenses being earmarked for climate action measures. Clean Energy Wire outlines the agreement's climate aspects and shows reactions from politicians, NGOs and business leaders in Germany [UPDATES comments by environment minister Schulze, BEE, WWF]

European Union member states have agreed on a massive green stimulus package, earmarking almost a third of the combined funds from the coronavirus recovery package and the 2021-2027 budget totalling 1.8 trillion euros to fighting the climate crisis. The corona recovery effort will be financed by joint debt of 750 billion euros.

Legislation and expenditure “shall comply with the objective of the EU climate neutrality by 2050 and contribute to achieving the Union’s new 2030 climate targets, which will be updated by the end of the year,” the conclusions from the four-day meeting of European leaders state. They also agreed that all expenditure should be consistent with the Paris Agreement climate targets.

As of 2023 the EU will charge a tax on goods imported from countries with lower carbon emissions standards (border adjustment mechanism).

Some climate-related instruments will, however, receive less money than originally proposed in the negotiations:

The Just Transition Fund for regions hit by the end of coal mining was reduced by 22 billion euros to now receiving a total of 17.5 billion euros from the EU budget and the recovery fund. The money is to be used for the transformation processes in regions dependent on coal and environmentally harmful heavy industry. Germany’s energy minister Peter Altmaier attributed this loss to “normal negotiation proceedings” and said that the money awarded to the regions was still a “hefty, considerable amount” and would be topped up by national governments. Due to opposition from Poland, there is also no condition to sign up to the EU’s target of net-zero emissions (climate neutrality) by 2050 in return for access to the Just Transition Fund.

Also, additional funds for Horizon Europe, research funding that largely focuses on climate action and energy research, have been cut back from ten billion euros to five billion euros in the course of the negotiations, Tagesspiegel Background reports.

Environment minister Svenja Schulze said the agreement "provides a good foundation for climate action, which we can build on through further legislation". She argued that the deal would allow Europe to emerge from the crisis "stronger and more climate-friendly than before", but cautioned that an appropriate distribution of the agreed funds was necessary to ensure that. "I will pay attention to this as the implementation process progresses," Schulze added.

"This budget is aimed at Europe's future," German Chancellor Angela Merkel said at a joint press conference with French President Emmanuel Macron. "The grants we are able to provide, but also the guarantees, are tied to reforms, development and two major tasks of the future: 30 percent percent of the expenses are earmarked for questions regarding the climate" and also for digitalisation, she said, adding that both the European Commission and the member states themselves will be responsible for ensuring that these criteria are met.

Economy minister Peter Altmaier welcomed the fact that roughly one-third of the expenditure will be strictly reserved for climate action. "This doesn't mean that we have achieved everything that is necessary," Altmaier said, but added that the deal marks an important starting point and will ensure climate plays an important role during Germany's EU Council Presidency. He stressed that the aim of European climate policy must not be to make life more difficult for industrial companies in Europe and let other regions benefit through that, but to combine economic success with the goal of making Europe "the first continent that achieves greenhouse gas neutrality."

The parliamentary group of Merkel's and Altmaier's conservative CDU/CSU alliance called the agreement a "vitamin jab for sustainable development" that showed European leaders can work together effectively even if their opinions differ. "Solidarity and solidity are as much part of this as economic growth and climate action. We explicitly support that. A strong Germany can only exist in a strong Europe!"

WWF Germany said pledging 30 percent of the package to climate action would not suffice to meet the target of a 55 percent greenhouse gas emission reduction by 2030, "particularly if expenses for fossil industries are not rigorously stopped," said WWF's Christoph Heinrich. WWF welcomed the fact that the "do no harm" principle is mentioned in the agreement but questioned the effectiveness of monitoring mechanisms aimed at ensuring that the principle is obeyed. "Without a rulebook akin to that of the EU [sustainable finance] taxonomy there will be no transparency regarding the climate effects of allocated funds," Heinrich said.

Environmental NGO Greenpeace said the agreement still needs to be amended to contribute to a greener economy. "Tying 30 percent of the total EU funds and especially 40 percent of the giant agriculture budget to climate action is a promise to millions of people who consider climate action as a cornerstone of a future-proof economy," said NGO head Martin Kaiser. Chancellor Angela Merkel and the European Parliament would have to make a binding decision to ensure that EU money no longer goes to companies and agricultural producers that make business on the expense of the environment and the climate, he argued. "Only if Merkel transforms the vague parts of this agreement into sound political decisions during the German EU Council Presidency will the past four days and nights have paid off. The announced CO2 border tax and a realistic CO2 price for dirty industries have the potential to finally help implement the Paris Climate Agreement."

Environmental Action Germany (DUH) called the agreement "a setback for climate action," arguing that global warming as "the central challenge of this century" has not been addressed adequately in the agreement. "There was an opportunity to link coronavirus aid with investments in the future and a true structural transformation towards a green economy," the DUH said, arguing that the targets for climate and environment mentioned in the document are too weak to effectively combat climate change and the loss of biodiversity. The NGO called on the European Parliament to amend the agreement and ensure that especially the "vague" statements in the 750 billion euro recovery package are substantiated.

The Renewable Energy Federation (BEE) generally welcomed the package but said it “lacked impulse" in climate and energy policy. While details of the EU's Green Deal remained wanting, cuts to the European Just Transition Fund (JTF) will pose the risk of making the transformation towards renewables more difficult, BEE head Simone Peter warned. Peter said the JTF was vital in facilitating the phase-out of fossil power production in coal regions but complained that under the new agreement, "those EU member states that did not introduce legislation to achieve climate neutrality targets by 2050 can also access the reconstruction fund". Moreover, the allocation of "only 30 percent" of the package to climate action does not properly reflect the importance of climate policy as both a matter of security and innovation, Peter said. "In its current form the package by no means meets the target of enabling a future-oriented crisis recovery."

The Federation of German Industries (BDI) said the Council agreement was testimony that the EU is both "able to act and to uphold solidarity" among its members. With the biggest investment package in the EU's history, "the member states acknowledge that investments in climate action, the digital economy and national healthcare systems are urgently needed," the industry lobby group said.

Joachim Rukwied, head of the German Farmers’ Association (DBV), said the agreement showed the EU is able to deliver. However, he criticised that the Council's compromise falls short of addressing the many challenges farmers are facing, including climate change. Rukwied said giving individual member states more leeway to implement agricultural standards would pave the way for a "grave distortion of competition" that runs counter to the ideas of the European Green Deal. He called on the European Parliament to act on this aspect and streamline agricultural policy across the EU.