The share of renewables in German electricity generation grew from 29 percent in 2016 to a record 33 percent this year, according to preliminary calculations by the Association of Energy and Water Industries (BDEW). “The gap between coal and renewables in Germany’s power production fell from 11 to under 4 percentage points in just one year”, BDEW head Stefan Kapferer said, stressing that the country’s power sector was “decarbonising itself with big steps”. As a share of gross electricity consumed, renewables rose to more than 36 percent, as Germany is a net power exporter.

According to the association's calculations, the share of coal in Germany’s power generation mix fell from 40.3 percent in 2016 to 37 percent in 2017. “The reduction of coal-fired power production is in full swing”, Kapferer told journalists in Berlin, adding that this trend was almost certain to continue over the next years as “nobody will invest in hard coal plants any longer” in light of the shifting market conditions. The utility lobby head said renewables were “the clear winner in net power generation” in 2017, and were able to substitute for the drop in conventional power generation “to the full extent”. Kapferer argued that Germany’s power sector was fully “on track” to meet its contribution to the 2020 CO2 emissions reduction target, while the transport sector “unfortunately makes no appropriate contribution” and would be “the main culprit” if the country as a whole failed to reach its 2020 target of reducing emissions by 40 percent compared to 1990 levels. 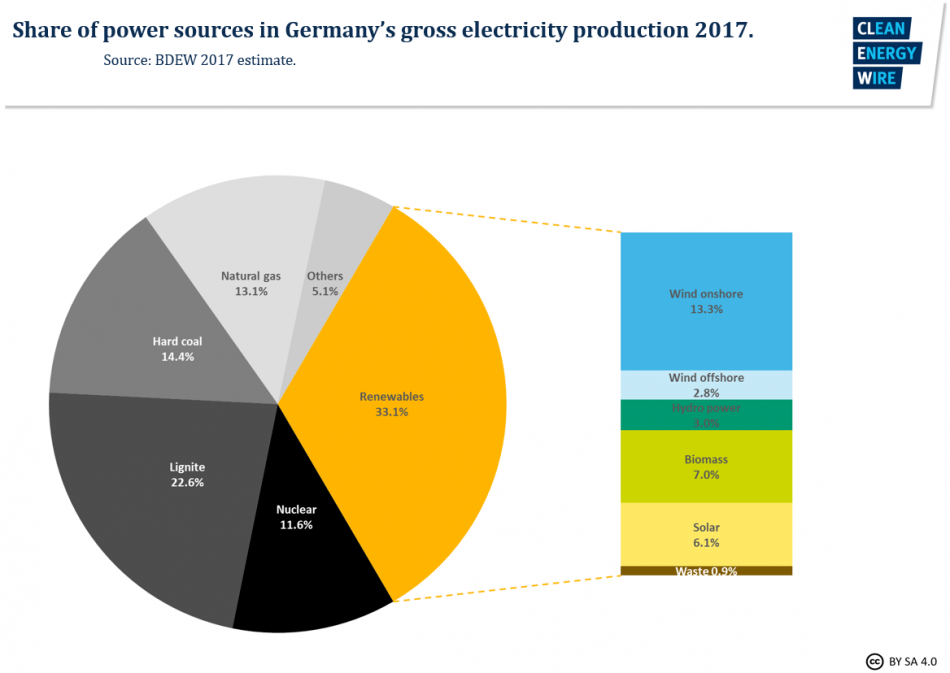 The market share of newly registered cars fitted with diesel engines  in Germany may have dropped sharply because the technology’s reputation is seriously tarnished, but diesel fuel sales rose to a record high this year, report Max Hägler and Jan Schmidbauer in Süddeutsche Zeitung. According to a forecast from German oil industry association MWV, diesel fuel sales increased by two percent to 39 million tonnes this year. The authors say the rise is due to the rapid increase in freight transport, fuelled by Germany’s strong economic growth. They also argue that the drop in new diesel vehicle registrations has for now had little impact on the total number of diesel cars on German roads. Company fleet managers and small business owners who drive a lot show no sign of shifting to alternative technologies, according to the article. “Even in year three after dieselgate, Germany remains a diesel country”, the authors conclude.

For background, check out the factsheet "Dieselgate"- a timeline of Germany's car emissions fraud scandal.

Peter Terium, CEO of German utility innogy, has left the RWE renewables spin-off days after the company said it will make less profit than anticipated this year and next, which had resulted in a considerable drop in share prices in the second week of December, reports news agency Reuters. “The supervisory board welcomes the corporate and finance strategy pursued by the board, but sees the necessity for greater emphasis on cost discipline and a more focused growth and investment strategy”, innogy said in a press release.

The surprising and sudden departure of Peter Terium as innogy CEO was in all likelihood not on amicable terms despite the company’s assurances, writes Jürgen Flauger in the business daily Handelsblatt. The supervisory board had probably rejected Terium’s strategy to fuel the company growth with more investments at the expense of profits. “In the end, last week’s profit warning, and especially the sharp drop in share value, was probably the Dutchman’s undoing”, writes Flauger.

Germany shuts down next nuclear plant

On 31 December, Germany will close the Gundremmingen B nuclear reactor in Bavaria, leaving the country with seven reactors to be shut down by the scheduled end-2022 nuclear exit, writes Craig Morris in an article for Energytransition.org. Morris retraces the history of the reactor and writes about its role in a recent record ramp-down of Germany’s nuclear fleet during a wind storm in October 2017. 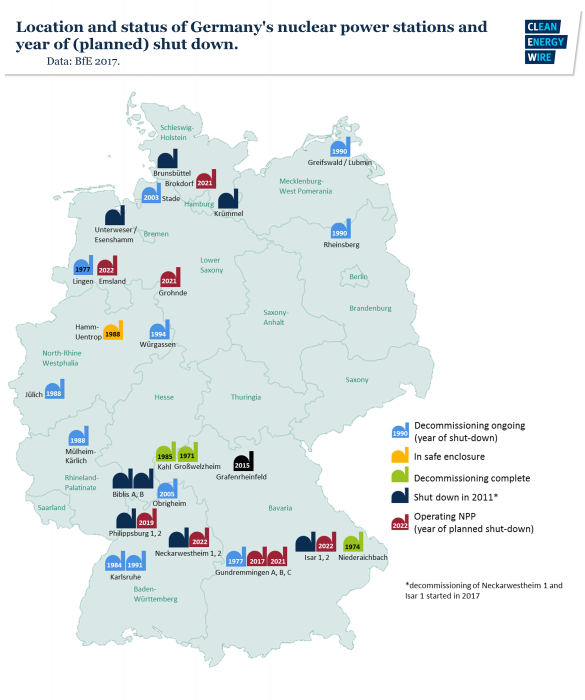 The European Commission has endorsed German exemptions from the renewables levy (EEG surcharge) for all existing self-suppliers of electricity (i.e. those that entered into operation before August 2014), as well as for new self-suppliers using renewable sources, it said in a press release. However, the Commission said it was still in talks with the German government regarding levy exemptions for operators of new cogeneration plants (CHP). According to a press release issued by Rainer Baake, state secretary in the economy ministry, the approval confirmed Germany’s policy “with which we promote the energy transition and at the same time ensure the competitiveness of the German industry”.

For background, read the CLEW factsheets, Industrial power prices and the Energiewende and Combined heat and power- an Energiewende cornerstone?

The agreement by the EU member states’ energy ministers on the Union’s future energy policy is “not commensurate with the challenges of climate protection”, writes Detlef Drewes in an opinion piece in the Frankfurter Neue Presse. With the current requirements in place, the goal of reducing greenhouse gas emissions by 40 percent by 2030 would be hard to reach. Drewes also warns that “not everything that is decided by government representatives in Brussels survives the ensuing domestic parliamentary discussions”.

Stefan Kapferer, managing director of the German Association of Energy and Water Industries (BDEW), welcomed the agreement by the EU member states’ energy ministers on the Union’s future energy policy, because it meant that the existing power price zones did not need to be split up, BDEW writes in a statement. “That’s important for a reliable and long-term grid development planning”, and ensured that businesses and households paid the same price for electricity, no matter where they lived in a country, said Kapferer. The ministers had agreed to give member states more time to develop their power grids, before examining a possible split of price zones independent from the national borders.

Train ticket prices are increasing faster than the cost of using cars for passenger transport, Allianz pro Schiene (Pro-Rail Alliance) has calculated from data collected by Germany’s statistical office. While the costs of driving a car have remained stable since 2010, the costs for rail customers have increased by eleven percent between 2010 and 2017. Overall, the costs of train and car use have grown apart by nine percentage points, Allianz pro Schiene says. The same trend is visible in costs for freight transport on rails and roads. 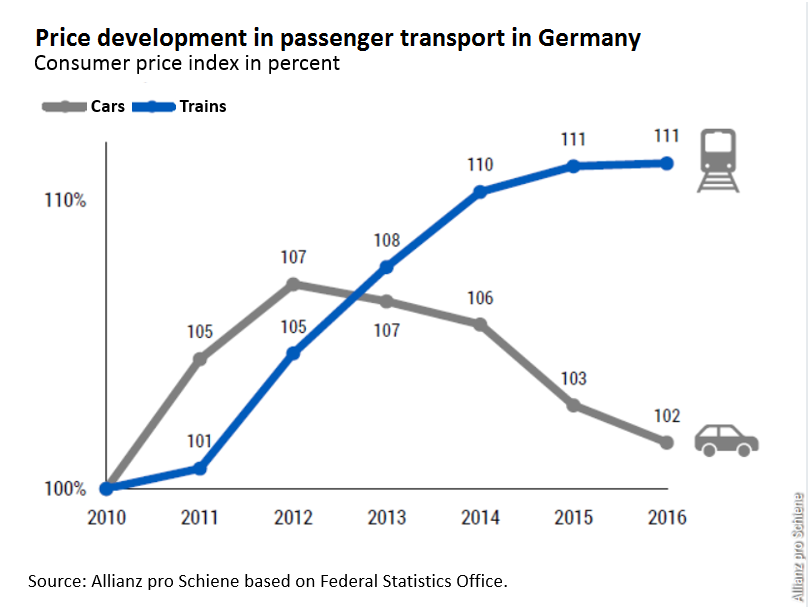