Germany’s renewable energy production capacity is to a large extent in the hands of private citizens and farmers, a study conducted by trend:research for the Renewable Energies Agency (AEE) has found – but the involvement of private individuals is falling compared to previous years. Almost one-third of installed solar, wind, bioenergy, hydropower and geothermal power capacity was owned by private individuals in 2019. Together with farmers (owning 73.9% of biogas installations), the share is 40 percent. Ten years ago, the share was over 50 percent, the AEE writes in a press release. In 2019, the share in capacity owned by businesses, large companies, energy utilities, banks and funds increased to nearly 59 percent, the new analysis shows.

For the first time, private individuals (with a share of 18%) no longer formed the largest group of owners of newly constructed renewable installations. The first place was taken by banks and funds (21%), which also invest in finance-intensive offshore wind energy and large-scale solar PV projects, while the classic private citizen investment in onshore wind parks was reduced due to the generally sluggish development in this sector. Project developers who often focus on onshore wind have also lost ground because of this.

"At the beginning of the energy transition, it was mainly private individuals who recognised the economic opportunities of renewable energies,” AEE managing director Robert Brandt said in the press release. He added that the fact that financially strong investors are now also more committed to climate-friendly energy production was a good development. “But citizen energy must definitely continue to find its place in the progress of the energy transition, because opportunities for participation promote acceptance," Brandt said.

Marcel Keiffenheim, head of policy and communications at Greenpeace Energy who also co-funded the study, called the results a “wake-up call” and said: “The most important group of actors over many decades is threatening to fall behind in many places - or is withdrawing in frustration.” He argued that it is local communities that get wind parks up and running even where large companies are uninterested because of smaller profit prospects. But since these citizens ensured that added value remained in communities and thereby increased acceptance of the energy transition, the government had to present solutions how to motivate local actors into energy investments again.

Solar PV (48% owned by private citizens), onshore wind (40.6%) and biogas (73.9% owned by farmers) are renewable technologies with a particularly high share of citizen involvement (all 2019). 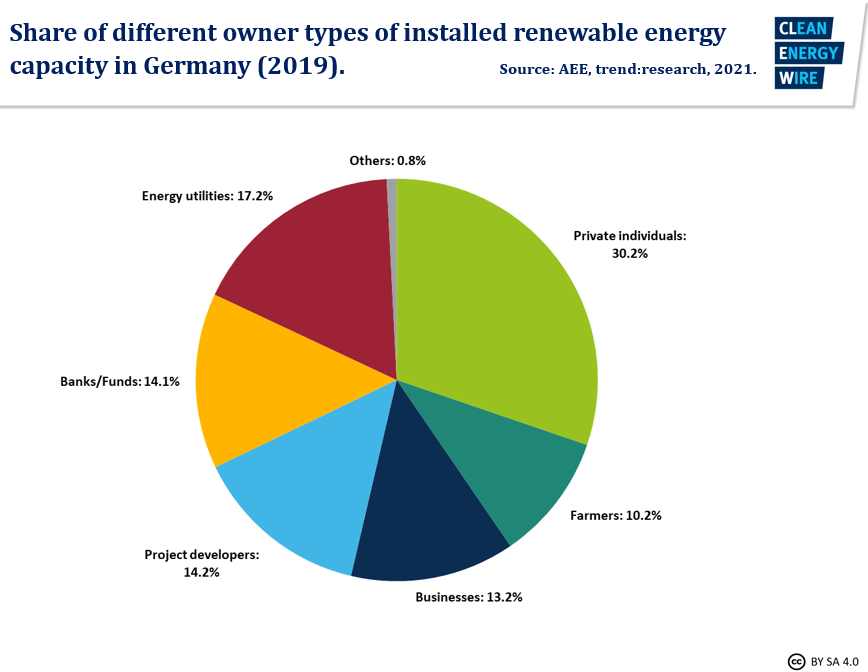 Citizens’ participation in the Energiewende