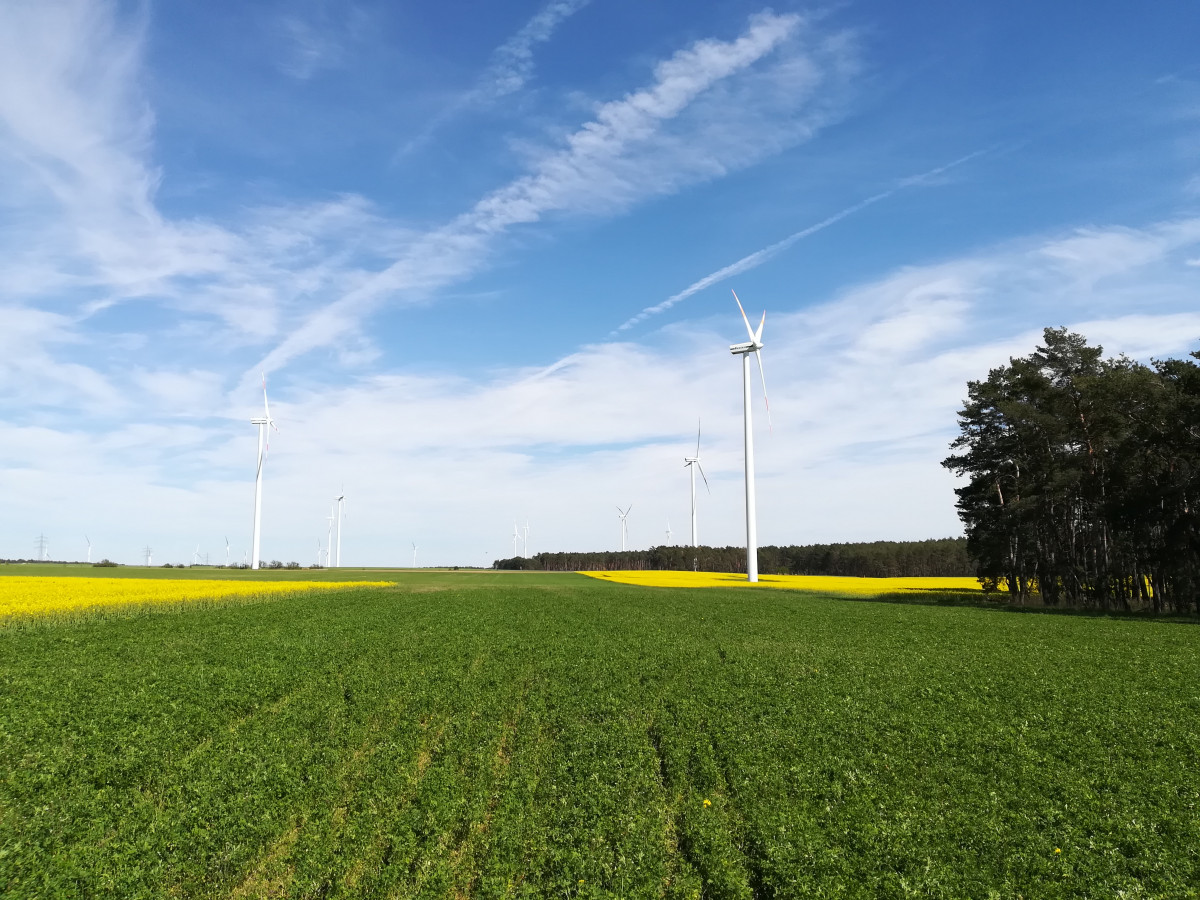 Germany should aim to install at least 5,000 MW of turbine capacity each year, says the industry. Photo: CLEW/Wettengel.

After several years of expansion doldrums, onshore wind power development in Germany has slowly picked up in the first half of 2021, but remains insufficient for renewables expansion and climate targets, the country's wind power industry said. The recently tightened EU emissions reduction target and the higher projections for the country's 2030 power demand would command much higher expansion levels. Germany should aim to install at least 5,000 MW of turbine capacity each year, according to industry organisations which say they worry the country could end up depending on imports of coal and nuclear power. The wind industry's latest figures also quickly found their way into election campagins.

With 240 turbines with a cumulated capacity of 971 megawatts (MW) added between January and June, growth in the first half 2021 had been more than 60 percent higher than in the year before and was more than during all of 2019, industry groups BWE and VDMA Power Systems said.

"The trend remains positive and the worst seems to be over," BWE head Hermann Albers said, but warned that a lot more needed to still be done. Most importantly, Germany had to improve its licensing procedures and ensure that sufficient space is reserved for wind farm construction.

After years of steady growth, wind power expansion in Germany had almost come to a halt after 2017, primarily due to administrative planning difficulties and interest groups trying to prevent construction in courts. But the country has to quickly speed up its renewable power expansion rate as it is shutting down its nuclear and coal power plant fleet.

VDMA Power Systems head Matthias Zelinger said the current surge in construction would not be enough to remain on track for the annual expansion target of 4,000 MW, as formulated in Germany's 2021 reform of the Renewable Energy Act (EEG), adding that the recently tightened EU emissions reduction target and the higher projections for the country's 2030 power demand would command much higher expansion levels.

According to the wind industry, Germany should aim to install at least 5,000 MW of turbine capacity each year. "We will have added between 2,100 and 2,300 MW of onshore wind capacity at the end of the year," Zelinger said. This would clearly be an improvement to the previous years but still far away from the levels needed to provide sufficient renewable power, he argued.

At the same time, a coordinated European wind power expansion strategy that aims to bring up to 30,000 MW to the grid annually would be overdue, Zelinger said. "A European focus in energy policy should be a priority for the next government," he added.

Germany's energy minister Peter Altmaier of the conservative CDU defended his government's record on wind power expansion, arguing that an action plan for the sector introduced last year had shown some first positive results. "But it's clear that we still need much more renewable power and a quicker expansion to reach our ambitious climate targets," he added.

The wind industry's latest figures also quickly made their way into the election campaign for the national vote on 26 September. CDU chancellor candidate Armin Laschet, who currently is state premier of Germany's most populous state North Rhine-Westphalia, on Twitter said that his state had done well in terms of expansion compared to many others. Yet, the conservative who currently is thought to be the most likely to succeed on Angela Merkel as chancellor also said that a "significant" expansion of renewable power would have to happen in Germany to combat climate change.

Green Party top candidate Annalena Baerbock criticised the government's lacklustre wind power record of the past few years, arguing that "those who talk about climate action also need to build wind turbines." Baerbock, whose party briefly led in polls but in the past weeks lost ground to the conservatives again, on Twitter echoed calls from the wind industry that about two percent of the country's total land area should be reserved for wind power production. "The conservatives are blocking this," Baerbock argued. She said renewable power would be "the raw material" of a climate-neutral industry.

The state with the highest expansion level once again was Lower Saxony, already the state with the largest wind power capacity in Germany. The northern coastal state offers much more favourable wind power generation conditions than the landlocked states further south. But the government aims to spread turbine construction more evenly across the country to avoid grid bottlenecks due to geographically concentrated production and to provide for a fairer distribution of the turbines that are still often causing controversies among local residents due to their impact on the landscape and on neighbouring villages.

But not only the government is hoping that onshore wind power expansion will pick up speed in the more reluctant states down south. In a position paper on the upcoming national elections in September, Bavarian industry lobby group VBW called for an urgent breakthrough in renewable power expansion, criticising the so called 10H-rule for wind power in Bavaria. The rule stipulates that the minimum distance for turbines from the next residential area has to be at least ten times the installation's height, meaning usually one kilometre and more.

Germany could not afford to miss the 2030 expansion target for renewables, VBW said, arguing that this would help to achieve climate targets and lower power prices for the industry. "All hurdles and in particular those to onshore wind power have to be removed," the group said, calling on the next government to come up with a "clear concept" how a steady renewables expansion can be guaranteed. "It would be unacceptable that we end up depending on power imports from Polish coal plants or French nuclear plants," the VBW stressed.