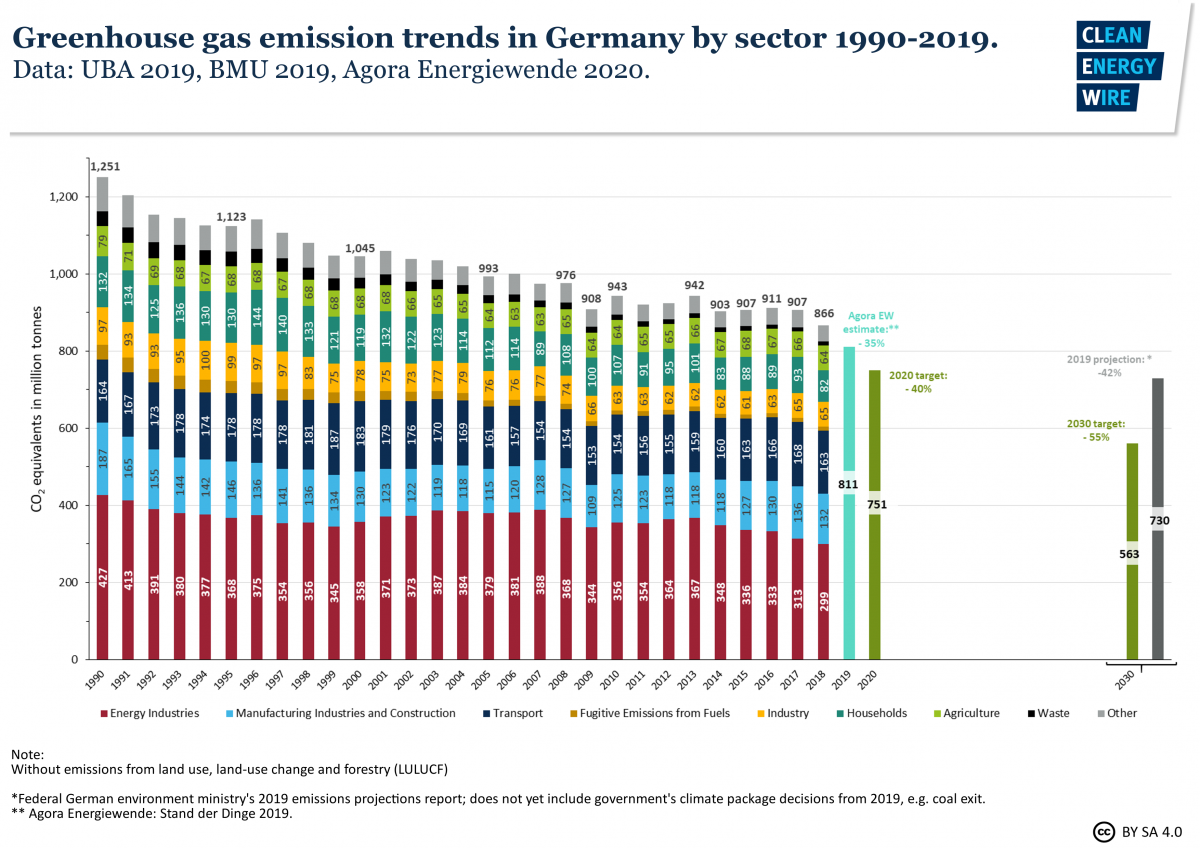 A sharp drop in coal use put a break on Germany's CO2 emissions last year and pushed the country "surprisingly” close to its 2020 climate target, writes energy think tank Agora Energiewende in its 2019 review. But a rising CO2 output for transport and heating tarnished Germany's success in the fight against the climate crisis, and the think tank warned emissions could rise again over the next three years. [Update adds reactions at bottom of text]

Germany recorded a significant decrease in total greenhouse gas emissions last year due to a sharp drop in coal use, but CO2 output in transport and buildings rose, writes energy think tank Agora Energiewende* in its 2019 review.

Overall, emissions decreased by more than 50 million tonnes CO₂ equivalents to about 811 million tonnes, which translates into a 35 percent reduction since 1990 and “surprisingly” brings the country within reach of its 2020 target of minus 40 percent, writes Agora. The think tank's estimate mirrors data from energy research group AG Energiebilanzen (AGEB) published in December.

Germany had reduced emissions by 30.8 percent by 2018, and the government was heavily criticised in the years before that because a wide miss of the 2020 target seemed inevitable. Even the environment ministry said it only expected a 33 percent reduction without additional emission cuts.

The 2019 decline is exclusively attributable to the electricity sector, where coal use dropped because of a higher price for European Union Emissions Trading System (ETS) allowances and renewable generation increased, according to Agora. Additionally, lower electricity consumption overall caused many fossil plants to cut generation as they ceased to be profitable, writes Agora.

The share of renewables in German power consumption thus stood at a record 42.6 percent in 2019.

Economy minister Peter Altmaier said the reports of significant greenhouse gas reductions confirmed that the government’s and the EU’s emissions trading policy is effective. “Due to the reform of the ETS, price signals finally begin to take effect! Fossil plants are being throttled when the sun shines and the wind blows,” he said in a message on Twitter.

However, higher consumption of natural gas, heating oil, petrol and diesel in the buildings and transport sector meant emissions rose there. In the transport sector, the growing proportion of heavy vehicles with large combustion engines, especially SUVs, led to an increase in emissions, write the researchers.

The country of the Energiewende - Germany's dual shift from nuclear and fossil fuels to renewable energy sources – has rapidly increased its share of renewable energy sources, but emissions have remained stubbornly high for years, mainly due to the continued use of coal power. However, the tide may have turned in recent years. The 2019 emissions drop follows a significant decrease in 2018, which was the largest drop since the 2009 recession. 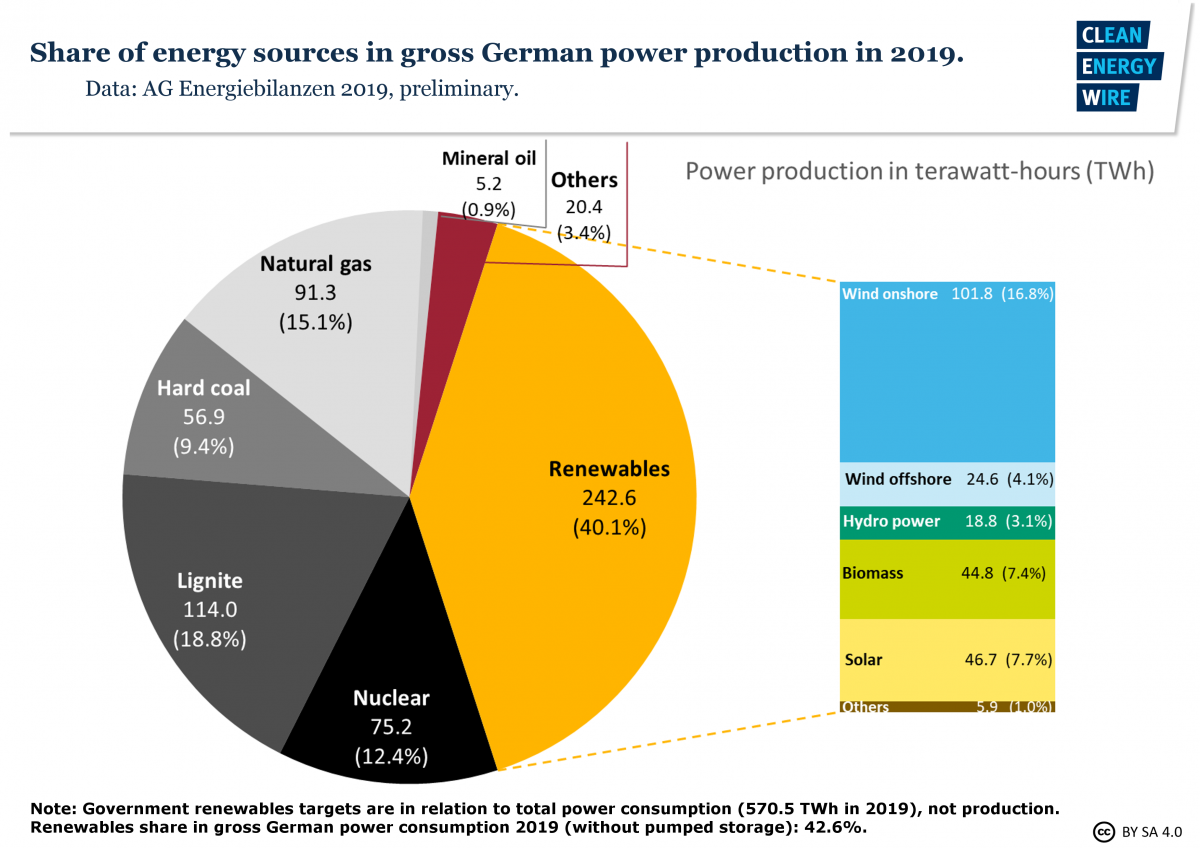 But Agora Energiewende head Patrick Graichen warned: "Following the declines of the past two years, there is a danger that emissions will rise again in 2020 to 2022.” He called for speeding up the roll-out of renewables to have enough clean electricity to make up for the nuclear exit by 2022, and for use in electric cars and heat pumps.

This would be in line with the population’s expectations, writes Agora. In a long-term survey by Forschungsgruppe Wahlen, respondents have named “climate/energy transition” as the top issue continuously since May 2019.

The German Renewable Energy Federation called the record share of renewables in power consumption a “great success”. However, Germany still lacks a masterplan to deal with the “striking slump” in wind power expansion, the association's president Simone Peter said in a press release. She called for more ambitious renewables expansion across the board, adding the government urgently needed to address the crucial planning framework. A dynamic expansion of renewable energies is only possible if hurdles such as blanket distance regulations for wind turbines did not become law, and a realistic gross electricity demand for the year 2030 was assumed, she said. Peter also called for a national CO₂ price in the power sector alongside the EU ETS.

“Energiewende kicks off the 2020s with a heavy mortgage”

Despite the positive results for renewables production, “the energy transition is entering the 2020s with an expensive mortgage,” as wind power expansion has almost come to a standstill over the past two years, said Agora head Graichen. He says this trend will continue as most of the 2019 onshore wind power auctions were undersubscribed. “we will not see robust expansion figures for wind energy in the coming years.”

Graichen said the government must set the right framework, as “without wind power, we cannot succeed in phasing out coal or meeting our climate protection targets.” Overall, Agora expects that renewables expansion will slow “significantly" in 2020.

The think tank writes that the development of fossil fuel use in 2020 – and thus of CO₂ emissions – remains undecided and will depend on the development of coal, gas and carbon prices, as well as wind conditions. “No reliable statements can be made on this at present.”

"Political action is effective in protecting the climate" - reactions

The reduction in CO2 emissions is “encouraging”, said environment minister Svenja Schulze in a message on Twitter, “because it is no coincidence - it shows that political action is effective in protecting the climate.” The higher price of CO₂ allowances in the ETS and mothballing coal plants take effect, she said.

Georg Nüßlein, deputy parliamentary group head of chancellor Angela Merkel’s conservative alliance and member of the CDU's Bavarian sister party Christian Social Union (CSU), agreed: “Germany is doing far more in climate action than some people with their ideological views might think.” The 2030 climate targets could be tackled as planned “in a way that Germany remains economically successful and climate action does not only come at the expense of people with smaller budgets.”

The Left Group’s energy and climate policy spokesperson Lorenz Gösta Beutin said the developments are by no means due to government action. “The climate-standstill grand coalition continues to try by all means to distract from its own failure in climate policy and collects somebody else’s laurels.” He said the main reason for falling emissions is that the EU ETS finally begins to take effect.

Matthias Miersch, deputy parliamentary group head of the Social Democratic Party (SPD) said the emissions reduction shows the “immense importance of renewable energies”. He called on economy minister Altmaier to “inject a new drive into the Energiewende, immediately present the coal exit law and put into law a dependable expansion path for renewables.”

Claudia Kemfert, climate economist at the German Institute for Economic Research (DIW), said the emissions reduction “is not a result of successful climate policy”, as emissions in transport increased and renewables expansion is hindered.

*Like the Clean Energy Wire, Agora Verkehrswende and Agora Energiewende are projects funded by Stiftung Mercator and the European Climate Foundation.