Factsheet
BMW is best known for its racy high-performance cars, but the Bavarian company was also a pioneer in e-mobility and sustainability. But on the road to electrification, BMW has fallen behind domestic rivals VW and Daimler, as well as being lapped by Tesla. It is now playing catch up with an ambitious new e-car plan. This factsheet provides an overview of the company and its plans for sustainable mobility.

BMW was founded in 1916 and is headquartered in Bavaria's capital Munich. The group focuses on the premium car market with the brands BMW, Mini, and Rolls-Royce.

Like its German peers VW and Daimler, BMW is a publicly listed company, but it is controlled by the Quandts, one of Germany’s wealthiest industrial families (including Susanne Klatten), who own almost 47 percent of its shares. BMW is headed by CEO Oliver Zipse since 2019.

BMW prides itself for being a sustainability frontrunner, saying it was the first company in the automotive industry to appoint an environmental officer in 1973. BMW was also a leader among German carmakers in the switch to e-mobility, but after an early sprint now seen as “expensive pioneering work”, the company has fallen behind competitors. BMW's indecisiveness in the switch to electric cars, its opposition to ambitious EU emission standards, and its embroilment in the "Dieselgate" scandal have seriously dented BMW's reputation for sustainability.

Whereas the first electric cars of other German automakers were models originally developed to house internal combustion engines, BMW launched the electric sub brand "i", which developed an entirely new electric model from scratch – a brave but costly strategy. The fully electric i3 went on sale in late 2013, featuring novel carbon-fibre technologies. It is assembled at BMW’s Leipzig plant, which operates its own wind turbines to power production. 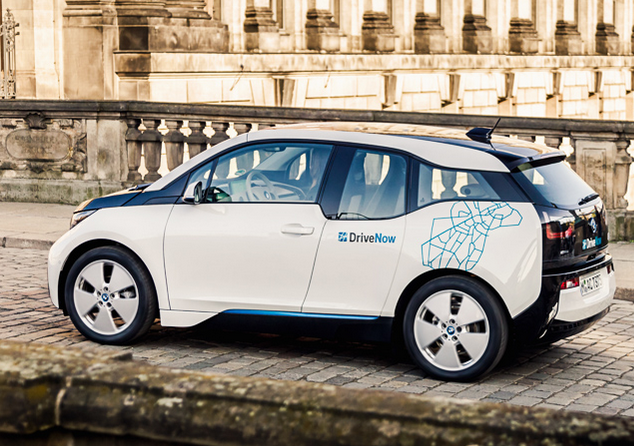 A BMW i3 of the company's car sharing service DriveNow, which has now been merged with Daimler's. Photo DriveNow

The i3 was one of the bestselling electric cars worldwide for several years. But the initial uptake of e-mobility was slower than BMW expected, resulting in sales well below the company's hopes, and severely dampening BMW's electric ambitions. The i3 has a solid fan base, but its innovative, slim and lightweight design was highly controversial, partly because it contrasted with BMW's muscular car image.

In an ironic twist, it fell to California-based Tesla to conquer BMW's home market with electric cars that closely mirror the Bavarian company's reputation for high-end racy and sleek cars. Tesla managed to poach many BMW clients with its Model S and Model 3, which overtook both BMW and Daimler in European e-car sales in early 2019. Tesla continues to ramp up the pressure on BMW and other German carmakers with its Berlin "gigafactory", which is set to open in the summer of 2021, and will eventually churn out 500,000 cars per year.

BMW competitors in the shift to electric mobility

In response to this competitive pressure and stricter EU emissions regulations, BMW has repeatedly stepped up its electric ambitions in recent years. But in comparison to many other carmakers, especially VW, BMW remained lukewarm on battery-electric mobility for a long time. It hasn't released any new all-electric vehicles since the i3, but will do so in 2021 - the more conventionally designed i4 and the iX SUV.

Following Mercedes' withdrawal from fuel cells, BMW remains the only proponent of this technology among major German carmakers. "Depending on how the surrounding conditions pan out, hydrogen fuel cell technology has the potential to remain a pillar in the BMW group's portfolio," Zipse said in July 2020. Many environmentalists and experts doubt that fuel cells have any future in cars because of rapid advances in battery technology, and because fuel cells are much less energy-efficient.

Following a sharp rise in electric car sales in Europe in 2020, the carmaker stepped up its electrification plans yet again in early 2021 with new plans that were widely seen as a strong commitment to e-mobility. BMW deliveries of fully electric models are to grow by "well over 50 percent annually" on average by 2025 and therefore increase more than tenfold compared to 2020. The company will give clear priority to electric cars in its portfolio from 2025 onwards with an entirely new vehicle architecture. Fully electric vehicles are to account for at least 50 percent of global deliveries by 2030.

BMW also plans to turn Mini into a pure e-car brand. The last new Mini with a combustion engine will enter the market in 2025. By 2027, the share of electric cars in Mini sales is to reach at least 50 percent, and the brand will only sell electric cars by the early 2030s. CEO Zipse said BMW will be "uncompromisingly electric, digital and circular," but it has no plans to produce its own batteries.

In a highly symbolic move, BMW said in late 2020 that it will stop making combustion engines in Germany, retool domestic plants to electric mobility, and shift conventional motor manufacturing to factories in Austria and England.

Despite this new focus on e-mobility, BMW currently has no plans to phase out combustion engine models any time soon. Zipse insists that "a one-propulsion strategy could be very dangerous," arguing there will be world regions in ten years' time where combustion engines will be sold. Other German carmakers VW and Daimler also have no fixed phase-out date, in contrast to Ford, GM, and Volvo, who have announced a faster exit from combustion engine technology. 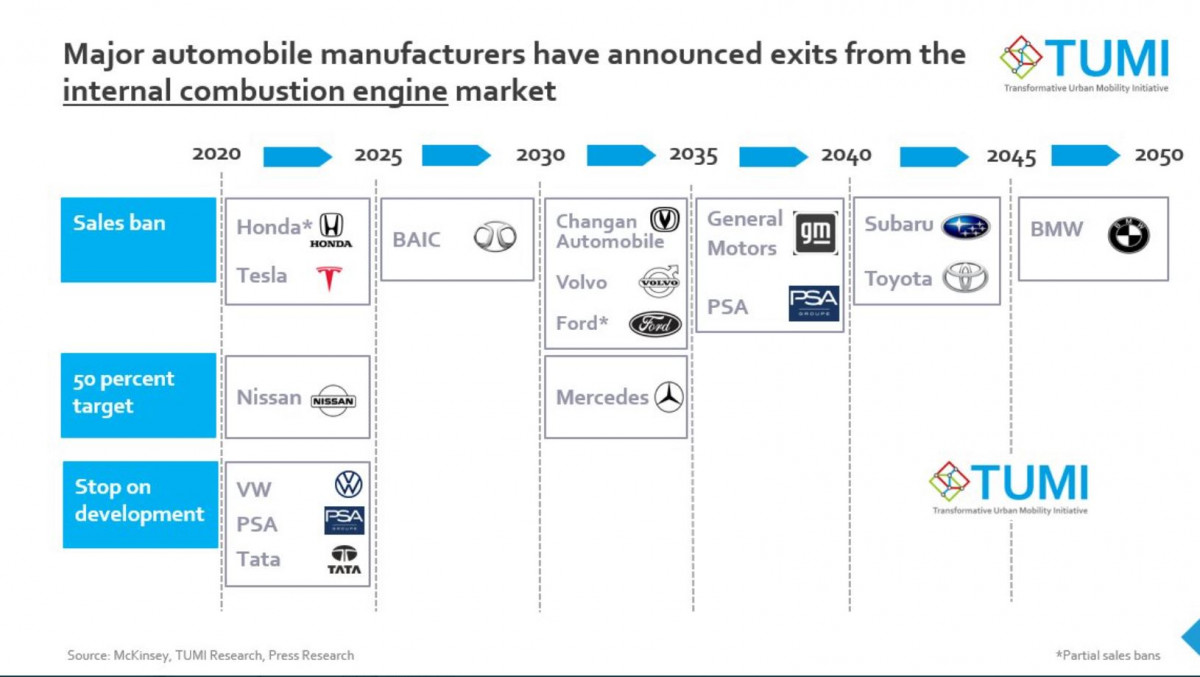 Despite its relatively slow progress in fleet electrification, the Bavarian company was named the world's most sustainable automotive company by the Dow Jones Sustainability Indexes in 2020. This was because BMW places much emphasis on lowering the CO2 footprint of their cars during production and in the supply chain. The company aims to reduce emissions per vehicle by at least a third throughout their lifecycle by 2030 through innovation, rather than offsets. "Specifically, we will be lowering CO2 emissions from production by 80 percent, during the use phase by more than 40 percent and in the supply chain by at least 20 percent," BMW said in early 2021. "Without corrective measures, growth in e-mobility would, in fact, increase supply chain CO2 emissions by about a third by 2030." As part of its sustainability strategy, the company invested in an innovative method for CO2 free steel production in early 2021, with the aim of lowering emissions from the steel supply chain by about two million tonnes by 2030.

In its bid to master the industry's "triple megatrend challenge" of stricter environmental regulation, autonomous driving technology and the shared economy, BMW has entered into a number of collaborations, most notably with arch rival Daimler and its Mercedes brand.

BMW and Daimler have also pooled resources in order to get the ballooning costs of self-driving cars under control.

Climate activists continue to doubt the company's real commitment to sustainable mobility. British NGO InfluenceMap, specialised in assessing climate lobbying, says BMW "appears to have become more positive since 2019" regarding climate regulation in the transport sector. "However, the company retains memberships of a number of regressive trade associations and has a history of making statements opposing the transition to electrified transport prior to 2019," according to Influencemap. According to a Guardian report, BMW was also among the companies lobbying strongly for a delay in the UK's combustion-engine phase-out.