Europe’s largest insurer Allianz has stopped selling policies to coal companies in an effort to fight climate change, report Oliver Ralph and Olaf Storbeck in the Financial Times. The company said it would immediately pull its coverage from single coal-fired power plants and coal mines, and that it would phase out all coal risks by 2040. Allianz added it would stop investing in companies that do not cut their greenhouse gas emissions, which would apply to 664 billion euros of investments, according to the article.

Contrary to the German government coalition's promise of financial support for the insulation of buildings, the finance ministry’s budget draft for 2019 does not mention the issue, reports Klaus Stratmann in business daily Handelsblatt. The German Industry Initiative for Energy Efficiency (DENEFF) told the paper that giving up on such a central issue to the energy transition was a damning indictment of the government’s policy. The heat insulation of buildings has been lagging behind government targets for years.

Find background in the dossier Taming the Appetite for Energy.

German government is so “sluggish, it makes you cry” – op-ed

Germany’s government sits on a big budget surplus, money it should spend on the energy transition and climate protection but it does not, writes Petra Pinzler in a commentary on Zeit Online. The government could use the money to push climate-friendly behaviour through tax and financial policies and show that a transformation to an environmentally friendly economy was possible. “But that’s exactly what they do not do,” Pinzler writes. The government rejected a CO2 tax, cancelled the planned additional tenders for a faster renewables expansion, and was fighting over the set-up of the commission that should define the path for a coal exit. Instead of investing in climate protection as part of a larger attempt to reduce global conflicts, the government has increased defence spending.

A broad anti-coal alliance of local residents, church representatives, politicians, and doctors demand participation in Germany’s upcoming coal exit commission, reports Thorsten Knuf in Frankfurter Rundschau. “As residents of lignite mining areas in the Rhineland, central Germany, and Lusatia, we are directly affected by the negative consequences of lignite mining and have fought for decades against relocation and the destruction of our home by opencast mining,” says a letter sent to economics and energy minister Peter Altmaier by the alliance, which consists of almost 50 regional players. . The coalition says it is outraged those directly affected have not been heard on the issue.
The special commission on growth, structural economic change and employment is supposed to find an end date for coal power in Germany in 2018 and define ways to manage the structural change. According to Handelsblatt, Chancellor Angela Merkel’s cabinet is due to approve the commission’s make-up on 16 May.

Read an article by Knuf on the issue in Kölner Stadt-Anzeiger (in German) here.

For background, read the factsheets When will Germany finally ditch coal? and Coal in Germany.

Germany can take the most climate-damaging coal power stations off the grid by 2020 while also accelerating its nuclear exit without putting supply security at risk, according to an analysis by Friends of the Earth Germany (BUND). In a detailed “shutdown timetable”, the environmental NGO argues that coal power generation can be cut much more rapidly than currently under discussion. “In the first quarter of 2018, Germany exported the power production of five large power stations on average. Against this backdrop, it's surprising the new government has not agreed on a short-term shutdown of the most climate-damaging power stations,” said BUND head Hubert Weiger in a press release. “Much more is possible given the political will to do so.”

Find the press release and the analysis in German here.

For background, read the factsheets When will Germany finally ditch coal? and Coal in Germany.

CO2 emissions in EU rise by 1.8 percent in 2017 while Germany records slight drop

CO2 emissions from fossil fuel combustion increased by 1.8 percent in 2017 in the European Union, while Germany recorded a slight drop of 0.2 percent. According to Eurostat, Finland and Denmark registered the largest emission reductions, while Malta and Estonia saw the strongest increases. 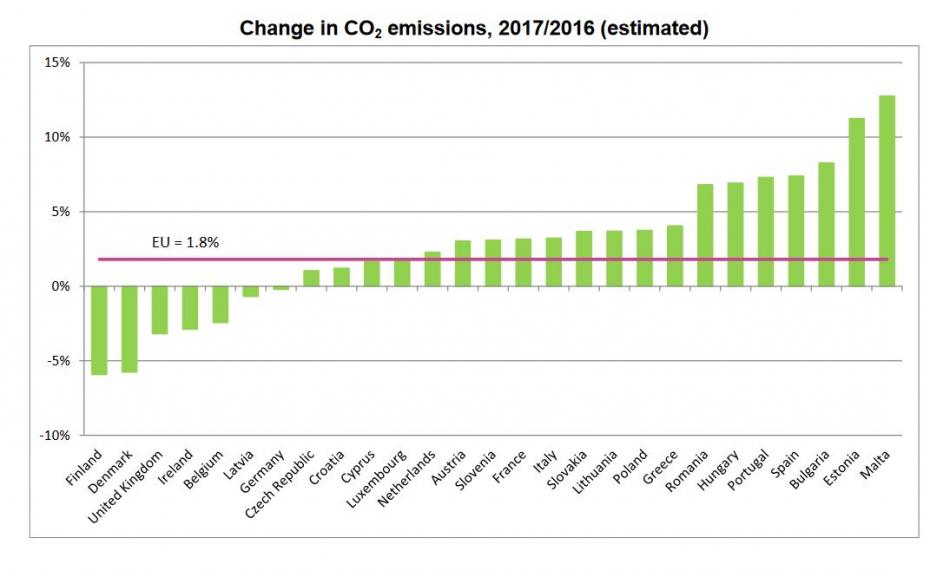