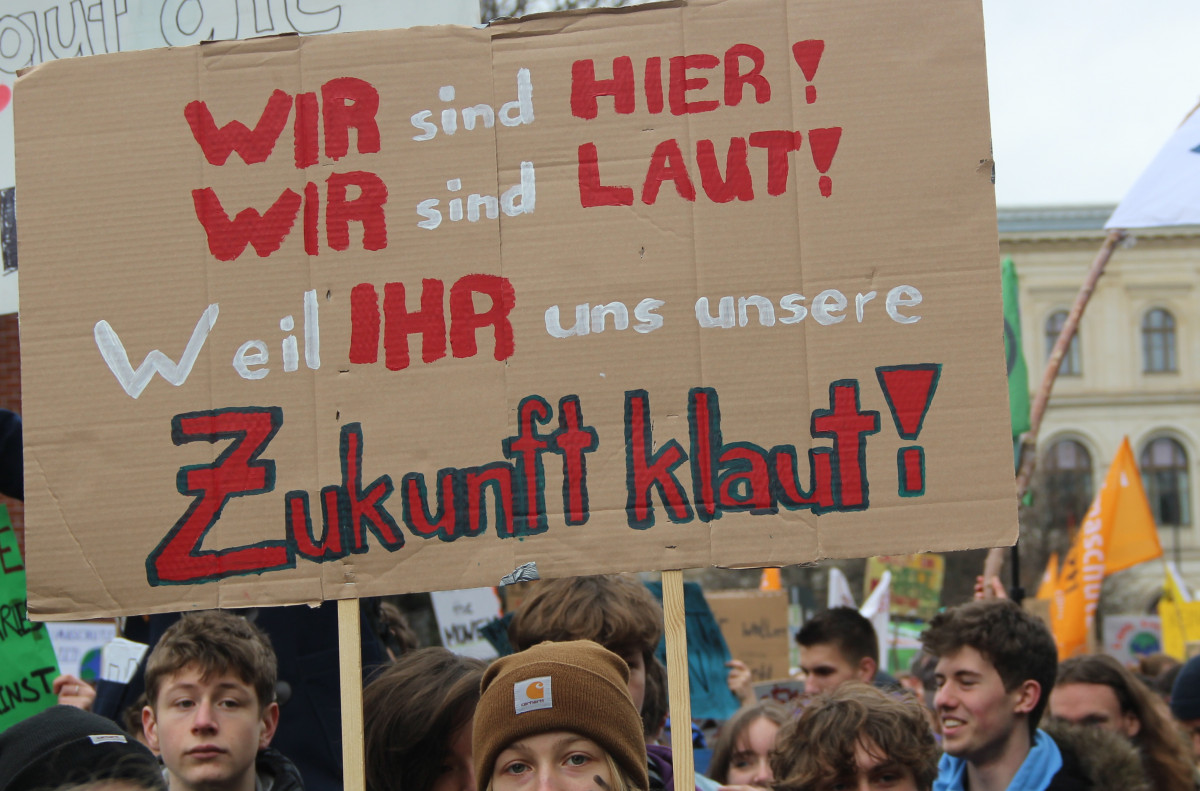 Protesters shouted "We're here, we're loud, because you are stealing our future!" at the 15 March 2019 protests in Berlin. Photo: Phil Bednarczyk

In the days after tens of thousands of students protested across Germany for more action on climate change, reactions poured in from across the political spectrum. Some conservative politicians argue students should not miss school, and that young people cannot be expected to understand all sides of a complicated debate. But others say the students are already having an impact. Political scientists argue that beneath the surface of the visible protests a more deeply rooted engagement might be taking shape. [UPDATE: Adds comments from political scientists.]

The school strikes on Friday swept through German cities, bringing tens, and perhaps even hundreds of thousands of students into the streets. The strikes have come at a moment when German lawmakers are already preoccupied with the issue of climate change. Chancellor Angela Merkel’s governing coalition is currently debating a new Climate Action Law and wrestling with the recommendations of the country’s coal commission, which has proposed ending the use of coal entirely by 2038.

Media observers noted that the students have already left their mark by keeping the climate issue on the agenda and scientists see a potentially lasting impact. Protest researcher Simon Teune from the Technical University Berlin stressed in an interview with Deutschlandfunk that the protests on the streets were only the visible part. “Protests is what we can see on the surface,” he said. “But the people go home changed. They take the energy with them and transform their commitment into different forms.” Sebastian Haunss, political scientist at the University of Bremen, said the global protests - inspired by Swedish student Greta Thunberg - resembled anti-war protests last seen during the Iraq war in 2003. “These are huge demonstrations of a kind we haven’t seen in quite a while,” he told told ARD Tagesschau, Germany’s prime time public broadcasting news show.

Andrea Nahles, the head of the country’s governing Social Democrats (SPD), said the “Fridays for Future” student strikes have already forced the government to take action. Last week, the German government established a new climate cabinet to coordinate emissions reductions across ministries. In a tweet on Friday, Nahles said the protests were at least partially responsible for the decision.

“Climate protection is now finally a top political priority for the German government,” Nahles tweeted. “That’s what the Climate Cabinet has decided to do…This is also your success, #FFF [Fridays for Future].”

In an interview with the Tageszeitung, environment minister Svenja Schulze (SPD) also expressed support for the students, but said she disagrees with protesters who say the government is taking no action.

“I think it's great that young people express themselves politically…And for climate protection it is definitely a tailwind, because it keeps the topic very much in the public discussion,” Schulze told Malte Kreutzfeldt and Bernhard Pötter of taz..

“What I do not share is the view that nothing at all is happening. That's simply not true, the Federal Government is on the right track,” Schulze said, pointing to the coal commission and the commitment to pass a Climate Action Law this year.

Debate continues over whether students should miss school

The students have faced some criticism for demonstrating during school hours, especially from the Free Democrats (FDP) and Merkel’s conservative CDU/SCU alliance, though Merkel herself has said she “strongly welcomes” the students’ initiative.

Economy minister Peter Altmaier, of Merkel’s CDU party, said in a conversation with student activist Luisa Neubauer published in the magazine Spiegel, that if he were a student, he would join the climate strikes - but on the weekend.

“In the end, the students strike against themselves,” Altmaier said. “If they want to change the world later as adults, and we all hope they will, then a good education is important.”

He added that he believes the government is on the right track. “We…take the Paris Agreement very seriously and will implement it,” Altmaier told Neubauer. “Unlike you, I am convinced that we will succeed.”

Meanwhile, some politicians on the left cheered on the protests, which also join strong support from the science community.

Anton Hofreiter, co-chair of the Green Party parliamentary group, told Deutschlandfunk radio that politicians who are criticising the students for protesting during school hours are dodging the real debate over climate change. Hofreiter objected to a question about whether students should be allowed to miss school.

“I believe that this is a classic debate to distract, to belittle these young people, not to take their concerns seriously,” Hofreiter told Deutschlanfunk’s Christoph Heinemann in an interview. “We are destroying their future. They have understood that, and that is a huge problem.”

In an editorial in the Frankfurter Rundschau, publisher Arno Widmann took issue with criticism of the protests from Annegret Kramp-Karrenbauer, the new head of Merkel’s CDU party. "The fact remains that they are skipping school for this,” the newspaper quoted Kramp-Karrenbauer saying.

“It’s the politicians who are skipping school,” Widmann writes in the editorial, noting that the German government has said it will miss its own climate targets for 2020 by a wide margin. “The students have every reason to demonstrate. The less the authorities care, the more reasons they have.”

Politicians should not just support, but actively join the student protesters, Widmann argues: “For years we have been discussing the seemingly unstoppable rise of the right. All of a sudden there are tens of thousands on the streets again, who do not long to return to a glorified past, but who want to pave their way into the future. We should applaud them. We should get up and go with them.”