Angela Merkel’s cabinet has initiated an amendment to the German Nuclear Exit Act that ensures compensation payments to operators of nuclear power plants who had to shut down their reactors in 2011. The law must be amended because the German Constitutional Court ruled that plant operators RWE and Vattenfall had made investment decisions in good faith after another amendment, adopted in 2010, awarded them longer run-times that were curbed again after the 2011 Fukushima nuclear accident and were therefore entitled to compensation. The new draft law leaves the actual sum of compensation payments open – they will first be decided in 2023, when factors such as lost generation hours, generation costs, and obtainable power prices are known. While RWE accepted the government’s proposal, Vattenfall criticised it, arguing that it would reduce the amount of compensation too much and would force operators of decommissioned nuclear plants to sell the remaining volume of electricity, Energate reports.
The German Renewable Energy Federation (BEE) has warned that such residual electricity volumes must not be sold to nuclear power plants located in northern Germany, where the grid is already overloaded.
The government estimates that the compensation payable by the state in 2023 will be “a three-figure million amount”.

Read a CLEW dossier about the nuclear phase-out here.

Read the energate article in German here (behind paywall).

A rising CO2 price and low market prices for electricity have led coal plant operators in Germany to throttle down their power production during the Pentecost public holiday, causing a short period of net power imports in the country that usually produces much more power than it consumes, Frank-Thomas Wenzel writes in the Frankfurter Rundschau. Very sunny and windy weather caused Germany’s renewable power plants to produce a lot of electricity, while at the same time consumption was low due to most businesses being closed, Wenzel writes. In addition, melting snow in the Alps filled many hydropower plants in Germany’s southern neighbour countries, making power even cheaper. But the jump in CO2 prices, which briefly reached 15.9 euros per tonne, made operating coal plants so expensive that the owners decided to lower the total capacity from about 16 gigawatts (GW) to 3 GW over the bank holidays, he says.

See the CLEW factsheet on The causes and effects of negative power prices and on Europe’s emissions trading system for background. 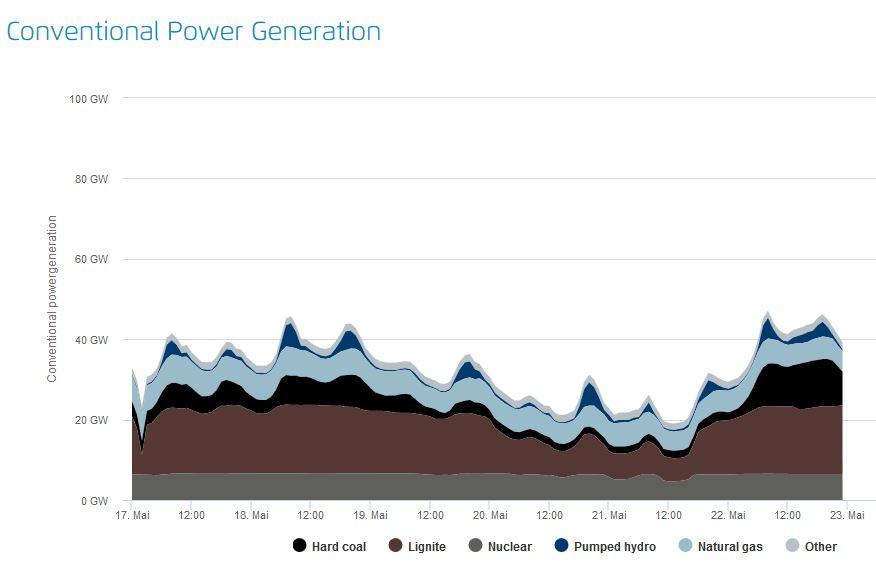 The expansion of wind power in Germany must be accelerated both onshore and offshore to make good on climate action plans outlined in the government’s coalition treaty, industry organisations German Wind Energy Association (BWE) and Offshore Wind Energy Foundation (Stiftung Offshore Windenergie), as well as the Metalworkers’ Union (IG Metall) say in a joint press release. The groups argue that the government must hold special auctions as promised in Germany’s coalition treaty, comprising 4 gigawatts (GW) of onshore wind power capacity and an unspecified “offshore wind contribution.” “The coalition treaty must be implemented in the interest of the climate, the industry, and the labourers,” IG Metall head Meinhard Gerken said. The government’s back-pedalling on special auctions for wind and solar power has caused a great deal of uncertainty for the industry that employs about 160,000 people in Germany, the lobby groups say.

The driving bans for older diesel cars on two roads in Hamburg, Germany’s second largest city, might be “miniature driving bans” and not enough to curb air pollution, but they will allow other municipalities and even federal states to follow suit, Kai Schöneberg writes in a commentary for the Tageszeitung (taz). In the short run, the bans on a total length of 2.3 kilometres will lead to diesel drivers using other roads without air quality measuring systems, Schöneberg says. But Hamburg still is “the entry into the diesel exit,” and rings in the transition to sustainable and clean mobility, he writes.

There is a huge, untapped potential to use biomass from food waste and the sugar industry in India, a study published by the German Biogas Association (Fachverband Biogas) and its Indian counterpart IBA suggests. The report gives an overview of the current energy policy and legal landscape in India, and includes suggestions on the further expansion of the biogas sector. This would give companies, project developers, and investors a realistic idea of the Indian market, Claudius da Costa Gomez from the German Biogas Association said. German bioenergy companies are increasingly inclined to look abroad for business, industry representatives told CLEW.

Read a CLEW dossier on the German bioenergy sector here.