Factsheet
When power prices on the electricity exchange fall below zero, power suppliers have to pay their wholesale customers to buy electric energy. The phenomenon is on the rise in Germany with an increasing number of renewable sources feeding into the grid. This factsheet explains how and why negative power prices arise, what the effects on consumer power prices are, what can be done to prevent them, and whether Germany loses out by exporting power at negative prices. [UPDATES throughout with new data, additional information]

The rising share of renewable power has made power prices much more volatile in Germany and negative prices have become a fairly common phenomenon.

In 2017, electricity reached its lowest average price on 29 October, when a combination of strong wind power output and low demand pushed the daily average down to minus 52 euros per megawatt-hour. This contrasts with a peak of 102 euros on 24 January, when renewable production was very low and demand strong, according to figures by energy think tank Agora Energiewende*.

The number of hours with negative power prices in Germany increased by around 50 percent to 146 hours in 2017, which translates into 1.6 percent of total time, while the average negative power price was minus 27 euros per MWh. The lowest price was minus 83 euros, which was less extreme than in 2016 (minus 130 euros), indicating that power market players have learned to deal with these situations. But the average negative price was lower (minus 26.5 euros per megawatt-hour) compared to 2016 (minus 17.8 euro per megawatt-hour).

How does power trading work and how do negative prices occur?

Prices in the power market are determined by supply and demand. On the German day-ahead power exchange EPEX Spot SE, power producers bid certain amounts of power for a certain price, while buyers lodge into the order book how much power they are willing to buy at a given price. This is done by 12 o’clock every day for all hours of the following day. When putting the bids for selling and buying in order, two curves can be drawn. The point where their trajectories meet, marks the market clearing price - the price that is paid to all successful bids (see Figure 1 and a real life auction curve here). 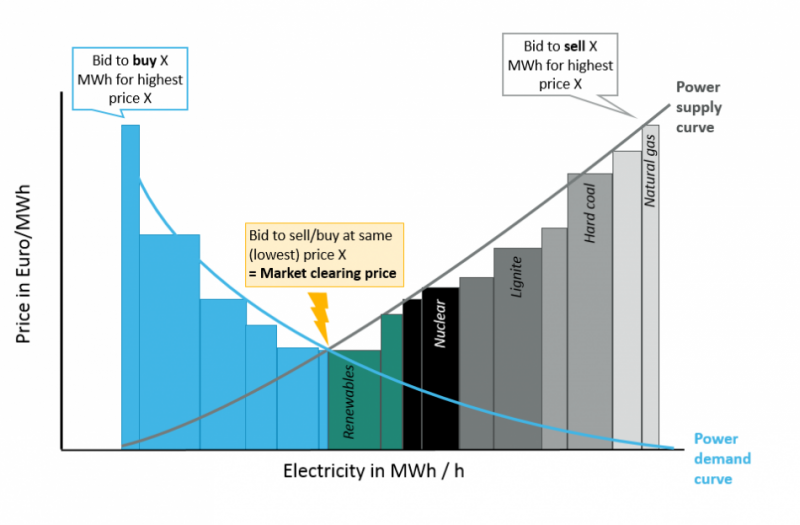 Negative power prices on the electricity exchange occur when a high and inflexible power generation appears simultaneously with low electricity demand. This is often the case on public holidays such as Christmas or Pentecost. Particularly in hours of (predictable) high renewable power supply (lots of wind and sun), power producers offer their electricity for negative prices on the exchange. This is often done by marketers of renewable power but also by conventional power stations like nuclear and lignite plants. In this event, the market clearing price can be set below zero (see Figure 2). 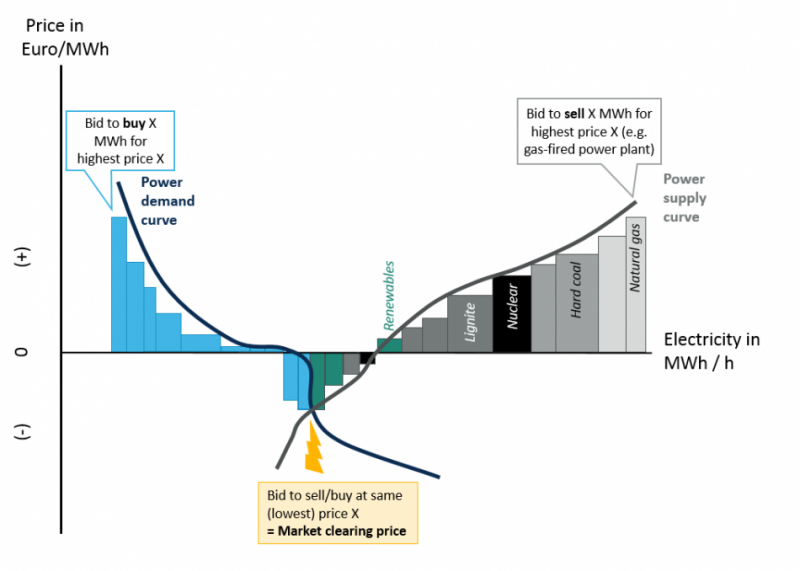 Why do power supply and demand have to be matched on the exchange?

Power can currently not be stored at a large scale in the German electricity system. To keep the power grid running stable at a frequency of 50 Hertz, the amount of electricity fed into the system and power demand have to be kept equal.

This balance has to be achieved by closely matching supply and demand – something that the power market has to deliver apart from its other purpose of shaping the trading price for electricity.

Electricity exchange EEX points out that negative prices are not generally a bad thing. They provide incentives to utilities to make their power stations more responsive to changing conditions on the power market, and offer companies new business opportunities by adapting demand. At times of high production, producers should be stimulated to take capacity offline, while large-scale consumers can ramp up demand when prices are low.

Because negative power prices are a sign of very high supply at the market, additional “cheap” renewable power is often blamed for causing the electricity price to drop below zero. But inflexible conventional power stations are equally responsible.

Renewables have priority in the power grid and therefore always come first in the merit order, making conventional electricity dispensable at times. Their share in electricity consumption has grown to 36.1 percent in 2017.

However, times featuring the right conditions so renewables can nearly cover Germany's entire electricity demand are so far extremely rare. On New Year's day 2018, renewables hit a symbolic milestone, by accounting for about 100 percent of power consumption for the first time at around 6 am (See Factsheet Germany’s renewable generation peaks remain shrouded in data fog to find out more about the difficulty of proclaiming renewable records). But even at times of very strong renewable production, conventional power plants, i.e. hard-coal, lignite and nuclear power stations, continue to feed power into the grid.

There are several reasons why conventional power station operators, which are either losing money or at least losing profit during times of negative prices, keep their plants running (See study by Energy Brainpool, page 4-5 and the 2016 results from Consentec). They can be technical, for example the power plant can be too inflexible to change its output, or the ramping or costs for shutting down and starting up can be too expensive. Another reason for keeping the plant running can be the obligation to provide contracted balancing power to keep the grid stable or provide re-dispatch power. Alternatively, it may be that a certain production has to be kept up to provide heat for a town household heating network. Those plant operators which have already sold their power at the longer term futures market face no extra costs when they let their units run – they are merely losing the profit that they could make by buying cheap power to supply their customers instead of producing their own.

Renewable power producers receive guaranteed feed-in payments for every kilowatt-hour they produce. As their power is sold at the electricity market (either by transmission grid operators or directly by renewable marketers) part of this feed-in remuneration is covered from the market price for power. But whenever the wholesale price is lower than the feed-in tariff (which it is most of the time), the difference is made up from the renewable energy surcharge (EEG surcharge), a levy that almost all consumers pay with their power bills. When the wholesale electricity price is high, the EEG surcharge is low. But when the market prices drop below zero, the difference payable via the levy increases and therefore puts a burden on consumers.

The EEG-surcharge is fixed every year in advance, based on assumptions about future electricity generation and market prices (See factsheet Green Energy Account). The Renewable Energy Act (EEG) stipulates that large renewable installations do not receive feed-in tariffs anymore when the price on the exchange is negative for six consecutive hours.

Means to prevent the occurrence of negative power prices

“More flexibility” is the key to preventing more hours of negative power prices in the future, a study by Fraunhofer ISI and other institutes for the Ministry for Economic Affairs and Energy (BMWi) states. The supply side (e.g. more flexible conventional power plant ramping; renewable installations providing balancing power; non-fluctuating renewables like biogas and hydro-power) and the demand side (e.g. large industrial power consumers; power to heat options; and increasingly storage) could both become faster at adjusting to high input from renewable electricity generation. More cross-border grid connections with neighbouring countries could offer additional relief.

* Like the Clean Energy Wire, Agora Energiewende is a project funded by Stiftung Mercator and the European Climate Foundation.