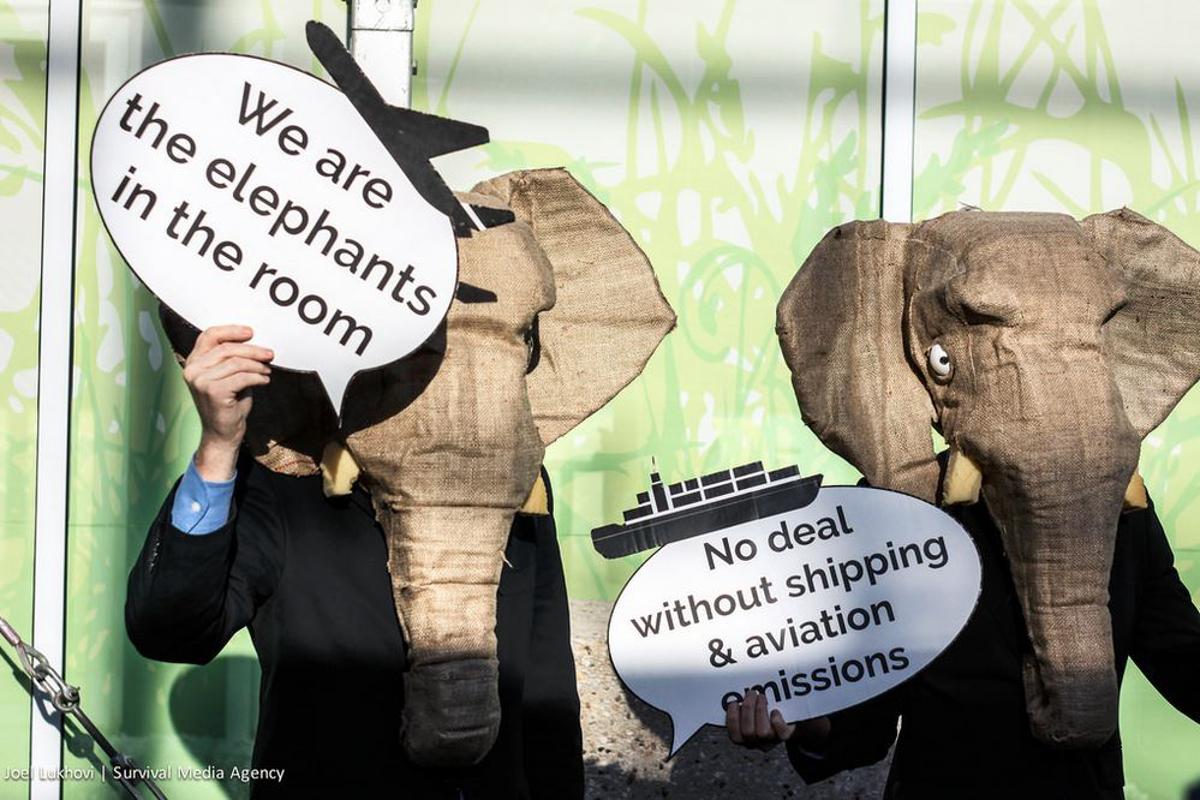 Shipping and aviation - the 'elephants in the room' have made it into the negotiating draft. Photo: Joel Lukhovi | Survival Media Agency via Flickr.
UPDATE (adds NGO statement on climate finance pledge) Agreement on a draft agreement – with lots of options / Climate funding pledges reach $94 billion / Climate risk insurance can help dealing with loss and damages / Climate blind spots shipping and aviation

Negotiators of the 195 countries represented in Paris have produced a draft text that is “manageable” for country ministers who will take over the talks in Paris next week, Germany’s head of delegation Jochen Flasbarth said. “It’s a basis that we can work with but there is a lot of work on the table for the ministers,” he said.

The content of the document hadn’t changed from Friday’s version but it now had a clear and intelligent structure. Duplications had been cut while maintaining the different position of different parties. “We have lost those paragraphs that were evidently not relevant or target oriented,” Flasbarth explained.

Just before noon on Saturday, the draft agreement had shrunk from 23 to 20 pages, with the complete document at 48 pages. Proposals made on Friday that would have added even more options to the text, were moved to a “Reflection note” in the appendix.

WWF Germany echoed Flasbarth’s assessment: While it was more clear what the options were, most points of conflict remained in the text, said Regine Günther, General Director Policy and Climate. Differentiation, finance, loss and damage, and the review process of national climate actions remain the contentious issues.

Climate finance has surpassed $94 billion, government sources have calculated, using the OECD’s methods. The estimate is based on the latest UNFCCC list of funding pledges, including those made at the UN summit in Paris this week. Developed countries promised at the 2009 COP in Copenhagen to step up climate finance, from public and private sources, to hit a target of $100 billion annually by 2020. There is hope among delegations that getting very close to the $100 billion mark this year – something that developing countries in particular are keen to see happen – will bring forward negotiations.

But NGOs were sceptical about the new climate finance figure. “Delegations of industrialised countries have a big interest in getting this message out there, but what they don’t say is that the calculations of the donor countries are not internationally agreed,” Jan Kowalzig, Adviser on Climate Change at Oxfam Germany, told the Clean Energy Wire. The figure included loans and export credits that couldn’t be considered support, he said.

The $94 billion figure also included leveraged private investment; actual funding pledges amount to only $82 billion so far, he said. “There is a lot of speculation involved,” said Kowalzig. He added that there was also a lack of funding for adaptation even though this was a high priority in poor countries.

Germany pledged support for investment in renewables and energy efficiency in African countries such as Rwanda, Uganda or Ghana through an insurance of foreign exchange risks. The environment ministry contributes 30 million euros, hoping to reach a total of 150 million euros together with other partners. This could insure and hence mobilise investment of up to $1.3 billion, the ministry said. The 30 million euros will come out of the environment ministry’s budget and are part of Germany’s public climate finance, which will amount to 4 billion euros by 2020.

Germany pledged over 150 million euros for the InsuResilience initiative on climate risk insurance by 2016. The initiative had been launched at the G7 summit in Elmau this year to give climate risk insurance to 400 million people in those developing countries most vulnerable to climate change. On Saturday, the other G7 countries also announced new commitments, taking the total to $400 million. The “rapid action package” would give insurance to 180 million people and strengthen existing insurance facilities in Africa, the Caribbean and the Pacific, the donors declared in a joint statement. “That means we’re already half way to achieving the 2020 target,” Thomas Silberhorn, state secretary in the the Ministry for Economic Cooperation and Development said.

Instead of waiting for months for aid to arrive, insurance initiatives like the African Risk Capacity (ARC) which is funded by InsuResilience,  could pay out within 2 or 3 weeks after a catastrophe, Ngozi Okonjo-Eweala, Governing Board Chair of ARC, said. The African member countries of ARC contribute to the insurance from their national budgets, Okonjo-Eweala explained.

Christoph Bals, Vice-Chair of MCII said at the same briefing that climate insurance could help to deal with the issue of loss and damage as it accepted the concept. “Insurance provides possible alternatives in the over simplified discussion about compensation in the loss and damage debate,” said Bals. However, insurance was no silver bullet, neither to solve the issue of loss and damage in the climate pact negotiations, nor in the real world, he stressed. “Insurance can never address slow onset processes like sea level rise, desertification, melting glaciers or migration.”

Elephant’s in the room – aviation and shipping

While the focus was on the big obstacles for the negotiations, some side events looked into climate issues that draw less attention. German agriculture minister Christian Schmidt e.g. called for an international moratorium to ensure that palm oil was produced sustainably because otherwise forests, important to absorb CO2, were under threat.

One panel discussed the “elephant in the room” at the negotiations: carbon emissions from the shipping industry. Participants pointed out that shipping goods was much less carbon intensive then road or air transport, and had made great strides in terms of efficiency. However, rapid growth of global trade meant that ships had to reduce their emissions drastically for a path consistent with a 1.5° or 2.0° C limit. The president of the Clean Shipping Coalition, John Maggs said the industry remained a “blind spot” in the climate world and called on the UNFCCC to highlight the need for action in this area as industry bodies lacked the leadership to move ahead fast enough. “Nothing stops the UNFCCC from encouraging (industry body) IMO,” Maggs said. “We are pleased to see that there is still text (on the industry) in the agreement.”

Germany, Denmark, the Netherlands, Sweden and the UK have cancelled 634.9 million surplus emission allowances (AAUs) under the Kyoto protocols first commitment period. Germany had decided a year ago to cancel 228 million units by not transferring them into the second commitment period at the beginning of 2016, said state secretary Jochen Flasbarth. Further surplus units from the second commitment period will be cancelled by 2020, the countries announced. Cancelling units removes “hot air” from the Kyoto system, which result from countries overachieving their targets.