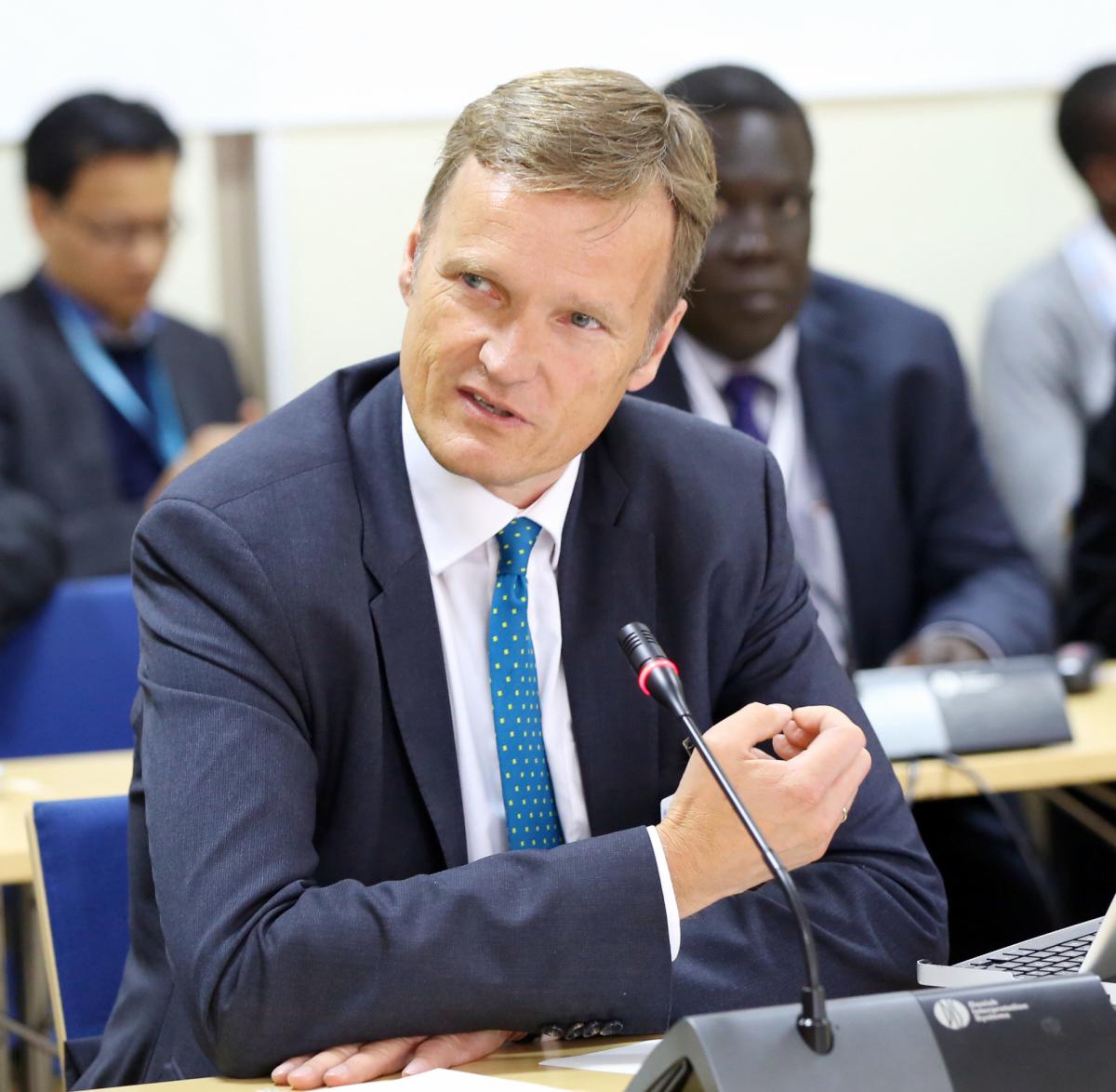 German negotiator Karsten Sach: "Fair split of obligations biggest hurdle in Paris". Photo: IISD/ENB
The final negotiations for a global climate treaty in Paris are just weeks away. What is the German perspective on an international climate agreement and what has the energy transition (Energiewende) got to do with it? The Clean Energy Wire talks to German negotiators, researchers, businesses, politicians and activists who have stakes in the talks. Today: Karsten Sach, Deputy Director General "European and International Policy" in the Environment Ministry who has been Germany's chief negotiator at UNFCCC climate conferences since 1999.

CLEW: A last round of preparatory negotiations for the COP21 meeting has just finished in Bonn. The draft text they discussed was heavily criticised both by the EU and the group of developing nations and China (G77). What did you make of the draft and talks in Bonn?

Karsten Sach: We aren’t exactly where we want to be yet after this round of negotiations in Bonn. Particularly the G77 and China, representing a large number of developing nations, have proposed amendments and we can see that some nations are more interested in delaying the negotiations while others wish to see clean copy that resembles the final treaty and that can be worked with.
But the 20-page document at the centre of the negotiations in Bonn was first and foremost a great leap forward because it was brief copy in legal terminology. There were definitely passages that weren’t balanced enough and it lacked a bit of ‘meat on the bone’, particularly when it came to clarity around a long-term climate goal, clarity regarding a mechanism for ratcheting up ambition over time, and clarity regarding accounting rules. This is where we saw room for improvement and now there are very good options for these issues in the new draft. But there are also still things that we don’t like at all about the draft.

And what are those things?

The issue of differentiated responsibilities, for example, where some developing countries are trying to further the strict separation of the world into two parts according to the status of 1992. The point of differentiated responsibilities is that everybody accepts that obligations are shared - but also that those obligations depend on the specific capabilities of each country. Industrialised countries are protesting against establishing different systems for review or transparency by differentiating only between groups of states. What we need are differentiated obligations according to the individual country’s capability for climate action, but also uniform review and transparency mechanisms. In the end it is a question of equity and about a fair split of obligations. I see this as the biggest challenge at the Paris negotiations.

Another very contentious issue in Bonn was climate finance, where the G77+China made a stance that seemed to have the potential to endanger a positive outcome of negotiations in Paris. How can this issue be resolved?

I am convinced that we can also find a compromise on this issue. Industrialised countries are well on track to fulfilling their promise of mobilising jointly 100 billion USD annually as of 2020 for climate action measures in developing countries. This includes both public and private funds. A recent OECD (Organisation for Economic Co-operation and Development) report shows that we already reached 62 billion USD in 2014. Parts of the remaining gap will be closed by Germany and the UK, who announced plans to double their contributions, and by promises by financial organisations such as the World Bank to do more. So we can give a reliable commitment that we will fulfil our joint promise by 2020.
But we also have to make sure that more climate finance is available after 2020. This will go hand in hand with changing the system. It has to evolve from one of few donors and many recipients to a system where more states, also contribute to the Green Climate Fund to increase the donor base. Some states, such as Korea and Mexico, or even Mongolia, have already taken this step. At the same time, the enabling conditions in the countries which receive climate funding have to be improved. This includes making investment conditions better by getting rid of distorting subsidies. Now all these aspects need to be put into the agreement.

What has to be in the Paris agreement in order for you to deem it a success?

Firstly, we need a legally-binding treaty with a clear long-term climate target, ideally a decarbonisation target. Secondly, there has to be a mechanism for ratcheting up of ambition over time – states have to think about how they can increase their level of climate action every five years. This should include the principle of “no backtracking”. And thirdly, we need clear rules on transparency and reference to ensure comparability so that we are able to see whether things are going well or not. We also need a long-term goal for climate adaptation and clear support for capacity building when it comes to the implementation of renewables or carbon emission trading in developing countries. We need more public and private climate finance by a larger group of states. That all belongs in the treaty and, for me, these are the terms of success.
Overall, we need a solid, robust and fair treaty. This treaty is supposed to last for decades. Therefore, it needs to be both modern and ambitious, so that it can account for changes in the ecologic reality without having blind spots about who in the past contributed most to climate change.  And this needs to be complemented by ambitious Intended Nationally Determined Contributions (INDCs).

Other countries can learn from Germany that it needs a wide-ranging civil society dialogue to have a transformation process like the energy transition. They can see that it needs new institutions for the transformation and instruments that bring new players into the energy market – this is the big success of the Renewable Energy Act in Germany, which helped to introduce new investors to a new form of energy. It also challenged the old energy industry establishment. They can also see that a highly industrialised country with a power system largely based on coal can, in fact, change. But another lesson learned is that it is not easy - that it needs a societal process where regions which are losing out in the process have to be supported. Germany should communicate the clear course that it has set itself with regards to climate action. But we should also openly say that not everything is perfect and that we are organising a learning process which will inevitably include trade-offs. But we have started this process because we are firmly convinced that the opportunities are bigger than the risks.

What will be the German role in the negotiations?

We are an important part of the EU negotiating team. Germany stands for living transformation and our ambition is a good investment signal for the economy. At the G7 meeting in Elmau earlier this year we have brokered ambitious decisions, like the G7 commitment to decarbonising the global economy over the course of the century, as well as making sure that we keep our promises on climate finance. Of course we will continue to play a constructive, progressive role in the climate negotiations.

You are a climate conference veteran. What is different in the Paris negotiation compared to Copenhagen?

The difference is that the reality out there has changed. This becomes visible in the very strong climate declarations from the US and China and the agreements between Germany and India, and Germany and Brazil. The big players have invested a lot into the process and therefore want to see results. Also, economic realities have changed: renewable technologies are affordable and competitive;  it makes economic sense to install them in the global south. Because of these learning curves we now have a very different situation compared to 2009 in Copenhagen. Another reason is that we have the INDCs from around 160 states covering around 90 percent of the global emissions – even if the standard of the contributions varies quite a bit. But there are obviously also still a lot of conservative elements who have been in the climate negotiation process for a long time, and changing realities also means uncertainty and things become harder to put into writing. Conditions are a lot more favourable than they were in Copenhagen but it doesn’t automatically make Paris a guaranteed home run. So a lot of work and tough negotiations are ahead.

If you are not successful in Paris, will you keep following the goal of a binding climate treaty?