The European Commission has opened infringement procedures against several EU member states, including Germany, for not applying their national provisions on penalties despite VW’s use of illegal defeat device software. “Additionally, the Commission takes the view that Germany and the United Kingdom broke the law by refusing to disclose, when requested by the Commission, all the technical information gathered in their national investigations regarding potential nitrogen oxide (NOx) emissions irregularities in cars by Volkswagen Group and other car manufacturers on their territories,” the Commission says in a press release. “Thursday's cases are a sign that the Commission, under pressure from the business-sceptical European Parliament and shaken by the rise of eurosceptic populists, is determined to show it can protect consumers,” writes Alissa de Carbonnel in an article for Reuters.

Read more about the influence of Dieselgate on the energy transition and German carmakers in this CLEW dossier.

Read more about the influence of Dieselgate on the energy transition and German carmakers in this CLEW dossier.

German transmission grid operators (TSO) have already had to use large amounts of this year’s "winter reserve", a pool of conventional backup power plants to prevent shortfalls in power supply, according to a joint press release from grid operators. Despite it being a capacity reserve for emergency or extreme situations, the TSOs say they need to use it regularly. “Although supply security is currently not in danger, the burden on power grids and therefore the supply risks are significantly higher compared to previous years, due to increasing feed-in of volatile renewable energies and the elimination of conventional power capacity,” write 50Hertz, Amprion, TenneT and TransnetBW. Due to lagging grid expansion, large amounts of wind power in northern Germany cannot be transported to the country’s industrial south, write the companies. France’s need for power could put an additional burden on Germany’s electricity system, say the grid operators. For this winter, they have secured around 8,300 megawatts of reserve capacity.

For background, read the CLEW dossier The energy transition and Germany’s power grid

Following the German constitutional court’s ruling this week upholding the government's 2011 decision to accelerate the nuclear exit, nuclear plant operators are continuing legal proceedings against the state, Jost Müller-Neuhof writes in Tagesspiegel. According to the newspaper, six lawsuits filed by the utilities are pending with administrative courts alone. The companies are eager to obtain more information on Chancellor Angela Merkel's motives for revoking her government’s 2010 decision to extend the service life of Germany’s nuclear plants, and how this decision was implemented legally, Müller-Neuhof writes. Apart from the proceedings in German courts, Swedish utility Vattenfall is also claiming 5 billion euros in damages through the International Centre for Settlement of Investment Disputes (ICSID) in Washington, the author writes.

Read more on the the constitutional court’s judgement in this CLEW article.

“Enough of this trench warfare”

By conceding to both government and nuclear plant operators' positions, Germany’s constitutional court has made a pragmatic judgement in one of the country’s most ideological disputes of the past decades, writes Jürgen Flauger for Handelsblatt. But the court’s ruling must have an impact beyond the nuclear phase-out, he argues. “Energy policy making has to rid itself of this ideological trench warfare,” he writes, adding that disputes around solar power, natural gas from Russia and especially the “number one climate killer” - coal plants - are equally ideological. “It is high time we formulate a binding exit plan for brown coal as well, a plan that takes environmental concerns into account as much as it respects economic interests of plant operators,” Flauger says.

Read more on the role of energy providers in the Energiewende in the CLEW dossier Utilities and the energy transition.

“Misunderstandings at the stock exchange”

The German constitutional court's intricate judgement on the country’s accelerated nuclear exit has caused confusion at the stock exchange, writes Malte Kreutzfeldt for taz. Although nuclear plant operators were granted “adequate” compensation by the judges - sending RWE shares up 5 percent - investors realised after a few hours that the utilities “will only see a fraction of their initial 19 billion-euro claim fulfilled,” Kreutzfeldt writes.

The higher crude oil price resulting from OPEC’s agreement to reduce its output could benefit Germany’s energy transition, Claudia Kemfert writes in a commentary for the German Institute for Economic Research (DIW). “A higher oil price facilitates the switch to sustainable fuels and ensures that more energy is saved. A low oil price encourages squandering,” she argues. Most importantly, “a low oil price impedes the switch from gasoline and diesel to sustainable mobility with alternative technologies and fuels,” Kemfert writes, by preventing investments in this key industry. “Germany cannot change the oil-oligopoly, but we can and should become independent from it,” Kemfert says.

“Infrastructure data for all”

Researchers at the Technical University of Munich (TU München) are working on an open source map to track bottlenecks and overcapacities in power grids around the globe, the university said in a press release. The resulting “world map of power grids” was “a prerequisite for energy transition – not just for us but for every country in the world,” said professor Hans-Arno Jacobsen, director of the chair for energy informatics and middleware at TU München. “You can only plan a transformation of the energy supply if you know where the power lines are, where power from high-voltage lines is being transformed and fed into low voltage systems,” he explained. In order to keep down costs for compiling the necessary data, researchers rely on crowdsourcing conducted by volunteers via an OpenGridMap-App available from Google’s Playstore. Once the data has been verified, it will be made publicly available and could help wealthy European regions and developing countries alike optimise their power supply, the researchers say.

Read more on the challenges for power grids in energy transition in the CLEW factsheet on Loop flows. 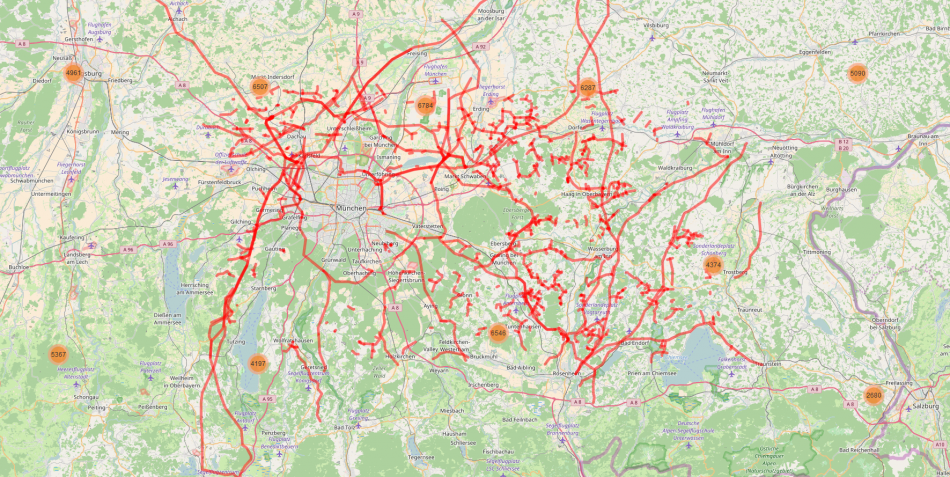