Renewables Renewable Energy Act | EEG 2014
Germany’s first auction for large solar arrays attracted many bidders but did not push prices below the current feed-in tariffs. On average, successful bids came in at 9.17 cents per kilowatt-hour (kWh), compared to a feed-in tariff of nine cents. But industry experts cautioned not to read too much into the results of the first auction.

In the pilot scheme, the Federal Grid Agency (Bundesnetzagentur) auctioned off a total capacity of 150 megawatts (MW). The average size of the 25 winning projects was 6.3 MW and bids numbered 170 in total.

Bundesnetzagentur President Jochen Homann welcomed the strong participation as a sign of investors' enthusiasm for operating ground-mounted solar parks. “The high number of bids is testimony to the intense competition for supports for ground-mounted solar arrays,” Homann said in a statement.

Solar industry Association BSW and the utilities’ association BDEW also applauded the high participation in the new tender scheme. “It’s positive that the first round of auctions was well received by a high number of bidders,” said BDEW head Hildegard Müller.

However, the BDEW also pointed out that the large interest in this first auction could be misleading, since many of the projects participating had been developed previous to the auction.

The government introduced the auction scheme partly to rein in the costs of the Energiewende by introducing market elements. Potential investors bid to install a certain capacity of ground-mounted arrays by specifying the feed-in payment they want to receive for each kilowatt-hour they produce.

Successful bidders have two years to complete the plants. Their specified feed-in payment will be fixed during this construction period and for the following 20 years.

Under the previous system, feed-in tariffs were fixed at a rate determined by parliament, which will be reduced to around 8.5 ct/kWh by 2017, according to the German Renewable Energy Federation (BEE).

German retail consumers pay around 30 cents per kWh for electricity.

The government hopes competition among solar energy producers will improve the efficiency of the financial support scheme and wants to extend the scheme to all renewables sectors.

Mathias Käso, researcher at the Brandenburgische Technische Universität Cottbus and co-author of a study on the new photovoltaic tenders, stressed that the average sucessful bid was far lower than the maximum price set in the auction design (11.29 cents/kWh). This means fears that many participants would bid close to, or exactly at, the maximum price had been unfounded.

“If there is enough competition, bidders stay away from the maximum price, and 170 bids really is a lot of competition,” he told the Clean Energy Wire.

Käso pointed out that the average price of 9.17 cent/kWh also meant many participants bid below that level for their PV projects. Käso said it gave an indication of what solar project developers believed to be reasonable remuneration to make their investment worthwhile.

“It’s not without a reason that photovoltaic development has plummeted recently with feed-in tariffs as low as 9 cents per kilowatt-hour.” 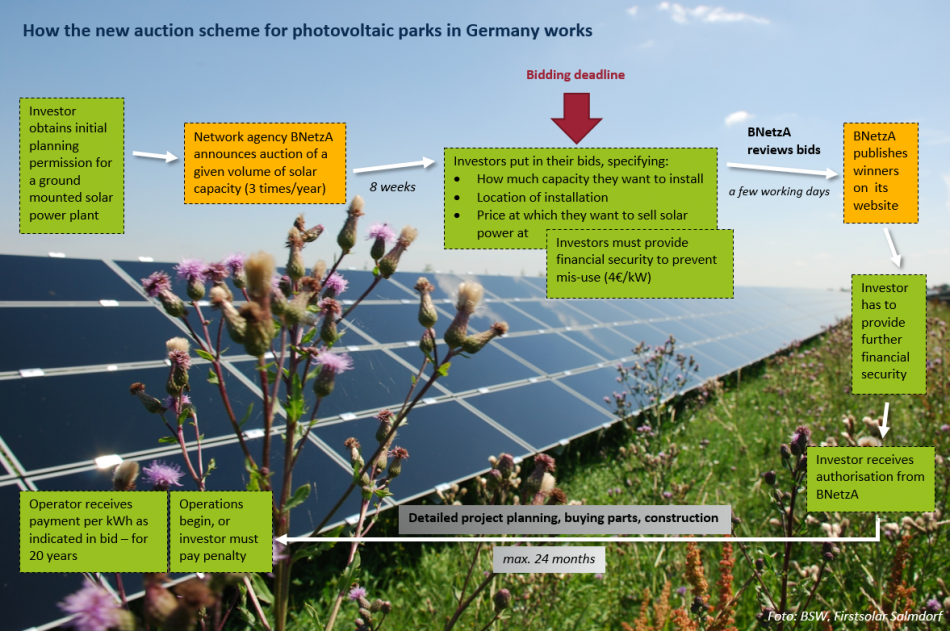 Germany's photovoltaic capacity is tiny compared to new capacity planned globally, and many of the big global players did not enter a bid, Weber told a media briefing at the Fraunhofer Institute's Energietage conference in Berlin. “We should not be irritated that the very first auction has not brought the lowest prices.”

He added the auctions were a valuable attempt to see if larger scale arrays were still possible in Germany. “This is an important tool and an important start," he said. "The old model of feed-in-tariffs has run its course. It has been important to get solar going.”

The German Renewable Energy Federation (BEE) warned that the high number of bidders in the first auction was no guarantee for future success. “The results of the first auction leave urgent questions unanswered," said BEE head Hermann Falk. He said the high number of bidders was due to applications by many pre-planned projects. “Following the pilot project, it is uncertain if the politically desired competition can be achieved in the medium and long term.”

But Käso said even if participation declined in the future, the current level suggested competition would stay high enough to have a working tender system.

Most successful projects are concentrated in the east, followed by south Germany, with no tenders won in the western and northern states of North-Rhine Westphalia, Lower Saxony and Schleswig-Holstein. The next round of auctions for 150 megawatts is scheduled for August 1, followed by a further 200 megawatts on December 1.