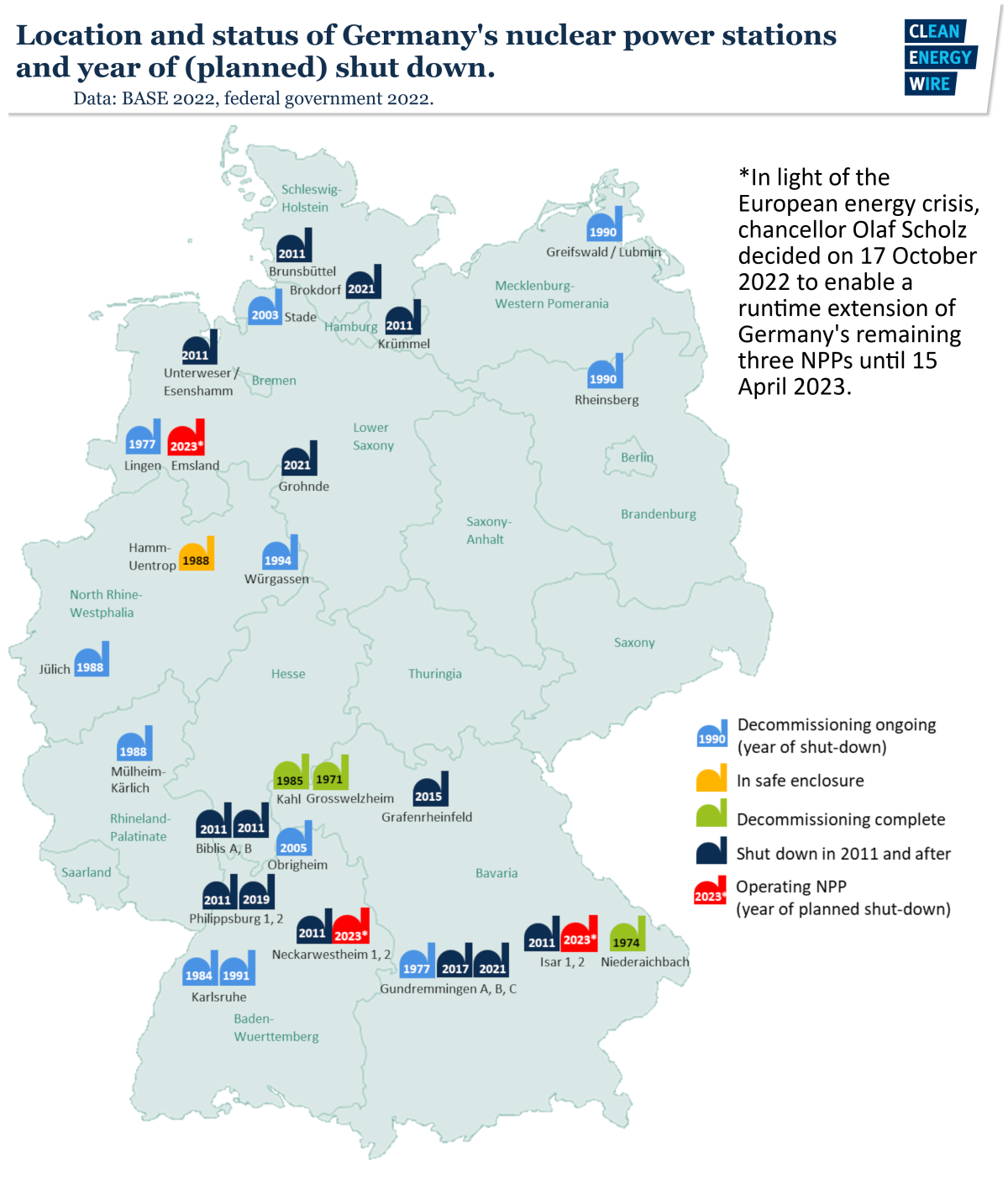 Chancellor Olaf Scholz has said his government would pave the way for prolonging the runtime of all three of Germany’s remaining reactors until April 2023. The German leader thus intervened to settle a dispute about the delayed end of nuclear power in the country which has kept his coalition government in conflict for several months. The decision was made in light of the European energy crisis and went further than an earlier proposal by the country’s economy ministry for just two of the plants. However, the chancellor’s decision means the nuclear exit will not be changed in principle and no new fuel rods will be purchased, thus ending nuclear power in Germany by April next year. The limited runtime extension – which still needs approval by parliament – is seen as a compromise for his coalition partners, the Green Party and the pro-business FDP, made ahead of what is expected to become a difficult winter for Germany’s and Europe's energy supply [UPDATE adds cabinet decision on nuclear law reform, Habeck quote on winter 2023/2024].

All three remaining nuclear power plants in Germany are set to receive a runtime extension from the government amid the European energy crisis. In a letter seen by Clean Energy Wire that was sent out on Monday evening (17 October) to ministers involved in the dispute about delaying Germany’s long-planned nuclear exit beyond the end-of-this-year deadline, chancellor Olaf Scholz said legal provisions will be made to ensure that all three reactors could continue to feed power into the grid “until no longer than 15 April” next year.

An earlier proposal by economy and climate minister Robert Habeck suggested to keep two plants in southern Germany, Isar 2 in Bavaria and Neckarwestheim 2 in Baden-Wurttemberg, in an emergency reserve until mid-April 2023 to serve as a backup in case of electricity shortages. The third plant, Emsland in Lower Saxony, was supposed to be decommissioned on 31 December of this year as planned. Contrary to Habeck's proposal to move the plants into a reserve, Scholz said the remaining plants would "produce as much as they still can - directly and without further detours." The exact shutdown date could also be earlier than mid-April, depending on the reactor's fuel rod supply. However, Scholz insisted the extension does not change Germany's general stance on the phasing out the technology: "After 15 April, nuclear power plants are finished in Germany."

Two days after Scholz's decision, the government cabinet decided the necessary legislative reform. The draft text to reform the nuclear law can now be debated in parliament. Minister Habeck reiterated that nuclear power would thus end by April next year and argued that in winter 2023/2024 Germany would have better conditions to weather the energy crisis. "We will be able to import significantly more gas, also via our own LNG terminals [liquefied natural gas]. The electricity grids will be strengthened and the transport capacities increased. There will also be additional generation capacities on the grid, especially for the use of renewable energies."

Germany’s nuclear phase-out, originally scheduled to be completed by the end of 2022, has become contested since the onset of Russia’s invasion of Ukraine and the ensuing energy crisis. Proponents of the technology within Germany and in other European countries argued it would be irresponsible to shut down existing power production capacity amid the crisis, whereas opponents warned against re-opening a dispute that had been legally settled for years. A grid stress test conducted by the economy ministry had found that keeping the plants as a backup could help stabilise Germany’s grid and also that of other European countries, especially since large parts of France’s vast nuclear plant fleet failed to deliver electricity as expected throughout most of 2022.

The Social Democrat (SPD) chancellor also promised that a new law to improve energy efficiency will be introduced in parallel with the nuclear runtime extension. Moreover, Scholz said the government would work to ensure that an agreement to end coal-fired power production in industrial state North Rhine-Westphalia already by 2030 can be implemented. The measure would be accompanied by the construction of new, “hydrogen-ready” gas-fired power plants, he added. All of the chancellor’s decisions are still subject to approval by parliament.

Green Party minister Habeck said he accepted the chancellor’s decision. “I can live and work well with it,” he told public broadcaster ARD. The minister said Scholz’s intervention that aimed at settling an argument between Habeck and his cabinet colleague Christian Lindner, finance minister for the pro-business Free Democrats (FDP), had been “an unusual solution in a muddled situation.” Finance minister Lindner had insisted on keeping all three plants online and also called for prolonging the runtime extension until 2024 to cushion the effects of the energy crisis on power prices and supply security in Germany.

The chancellor’s decision came only two days after Habeck’s Green Party at a party convention officially accepted a runtime extension only for the two plants in southern Germany. Green Party co-leader Ricarda Lang said her party would continue to consider the runtime extension for the plant in the north unnecessary. “The Emsland nuclear plant is not needed for grid stability,” Lang said, adding that further talks are necessary. Green environment minister Steffi Lemke, whose ministry is responsible for nuclear safety, said the extension would not change Germany’s nuclear exit scheme in general. “The nuclear phase-out stays,” Lemke said, adding that there would be no further extensions and no new nuclear fuel rods would be purchased for German reactors.

Finance minister Lindner welcomed the chancellor’s decision. “It’s in our country’s and our economy’s vital interest to maintain all capacity for energy production this winter,” the FDP leader argued in a message on Twitter, adding that Scholz’s intervention “has provided clarity.” Also, the Emsland plant could make “an important contribution to grid stability, power prices and climate action,” Linder said in a report carried by Neue Osnabrücker Zeitung, adding that the government would also find a solution for the winter season at the end of next year. Already in July, Lindner had called for a complete rethink of Germany’s nuclear exit, arguing that nuclear power should replace gas as a bridge technology in the energy transition.

The government of Lower Saxony rejected arguments that the plant near the North Sea coast would be needed for grid stability in the state. Environment minister Olaf Lies from the SPD said the Emsland plant would make “no real contribution” to energy security in northern Germany. SPD state premier Stephan Weil, who recently got re-elected in a major victory for chancellor Scholz’s party, said his state government would ensure operations can continue, adding that at least the purchase of new fuel rods could be prevented, newspaper Frankfurter Allgemeine Zeitung reported.

Nuclear plant operators E.ON and RWE, which operate the Emsland and Isar 2 plants, respectively, supported the chancellor’s position, newspaper Die Zeit reported. “This is a political decision that we can comprehend given the current energy crisis,” RWE said, promising to make all necessary provisions to ensure safe operations until April next year. E.ON said it would stick to earlier commitments made regarding the continued operation of its plant in Bavaria, where stress situations for the power grid are a greater risk than in other parts of the country. EnBW, operator of Neckarwestheim 2, said a sound legal basis was needed for continuing operations at its reactor before it could confirm its readiness.

A direct intervention by the chancellor in a dispute between cabinet members is rare and suggests that Scholz aimed to calm down tensions in his three-party coalition ahead of what is expected to be a difficult winter for the German government. The chancellor’s decision provides a middle ground between the positions held by the Greens and the FDP, as it goes beyond Habeck’s initial proposal for continuing operations of two reactors but stops short of Lindner’s call for extending the runtime until 2024. Jakob Schlandt of energy policy newsletter Tagesspiegel Background commented that Scholz’s intervention had allowed all parties in the coalition to save face. “The FDP is happy content-wise, the SPD gets to have the last word and the Green ministers can say they have been forced into a corner,” Schlandt said, stressing that the Green Party still must give its consent in parliament.

The head of Germany’s grid agency BNetzA, Klaus Müller, called the decision “a clever compromise for supply security” that would end the debate about procuring new fuel rods. Environmental NGO Greenpeace, on the other hand, warned the runtime extension posed “an irresponsible risk-taking for all of us.” The recent attacks on the Nord Stream gas pipelines had “drastically increased” the risks of energy infrastructure malfunctioning. “Instead of wasting resources on the continued operation of old nuclear plants, all means must be invested into an accelerated expansion of renewable energy sources and energy saving,” Greenpeace head Martin Kaiser said.