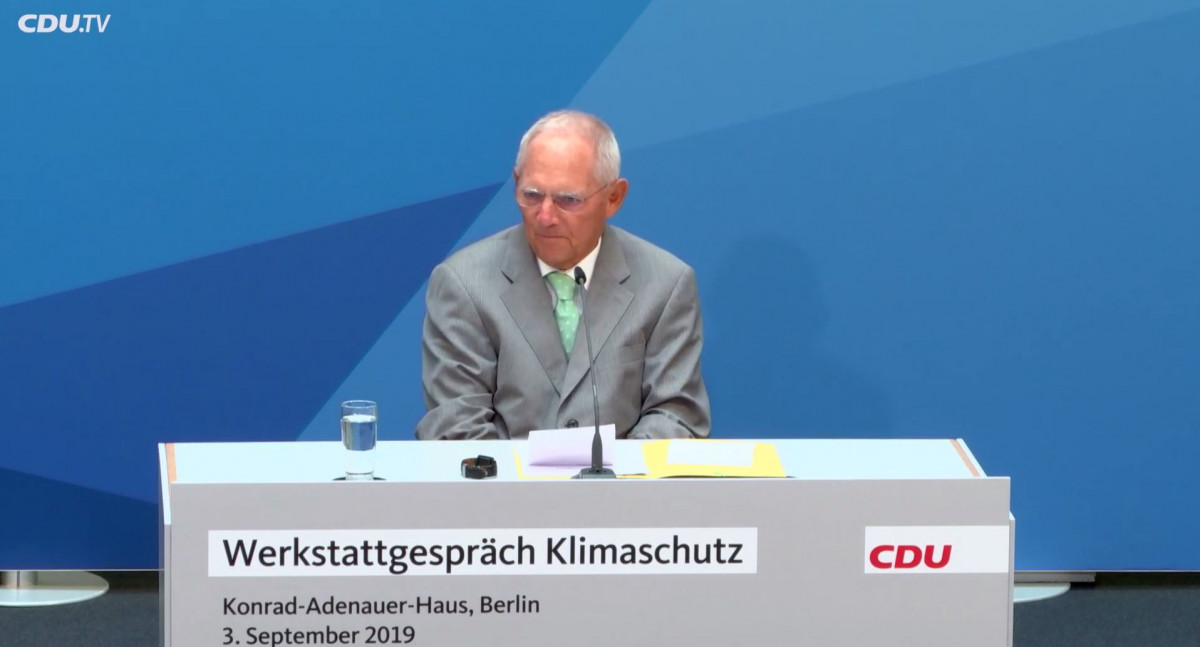 Following key regional elections in eastern German Saxony and Brandenburg, the conservative parties in Chancellor Angela Merkel's grand coalition – the Christian Democratic Union (CDU) and the Christian Social Union (CSU) – have started to intensify their work on proposals to bring Germany back on track to reaching its climate targets. The parties plan to agree a joint position ahead of final negotiations with their coalition partner, the Social Democratic Party (SPD). Internal papers from both parties show that the conservatives continue to favour a national allowance trading system over a tax to reduce CO₂ emissions in transport and buildings. CDU head Annegret Kramp-Karrenbauer said Germany had to introduce a national price first, as it could not wait for EU neighbours to agree on a European solution.

The CDU wants "environmental protection to be financially worthwhile for those who act according to this principle: Those who save CO₂ fare better," says the two-page paper seen by Clean Energy Wire. Proposals include lowering the renewables levy (EEG surcharge) step by step, increasing the ticket levy for flights, strengthening public transport and rail freight traffic, tax support for energy-efficient modernisation of buildings, tax incentives to create low-emission alternatives, and financial support for non-fossil technologies and fuels.

After years of booming renewables, Germany's planned transition to a low-carbon, nuclear-free economy – the famed Energiewende – has slowed in recent years. Emissions remain too high to reach climate targets, renewables expansion has slowed, and initiating changes in sectors such as transport has proven to be extremely difficult.

Climate action also was a key issue in a five-hour leadership meeting of the grand coalition in Merkel's chancellery Monday night (2 September). The partners had agreed not to disclose the results of what they called a "working meeting" ahead of the climate cabinet session on 20 September. "We're still talking about it," said conservative parliamentary group leader Ralph Brinkhaus in an interview with Deutschlandfunk.

A price on CO₂ emissions in the transport and buildings sectors is a key issue of debate in the government coalition. The Social Democrats support a CO₂ tax, as this could be introduced relatively quickly – as opposed to a national emissions trading system, which is supported by the conservatives.

The newspaper Die Welt reports that the CSU group in the national parliament is set to decide its “Climate Concept 4K" in a meeting today (3 September). A core element of the proposal is the introduction of national carbon emissions trade for transport and heating. The European Union's ETS (Emissions Trading System) in the energy and industry sectors had proved itself already, writes the CSU in the concept. The CSU group also wants the CO₂ trade system in transport and heating to become an EU-wide scheme "as quickly as possible." The national system should have an upper price limit, the conservatives say. If it is reached, additional allowances should be created through national and international reforestation projects. The CSU rejects a CO₂ tax.

Other CSU demands include tax support for the energy-efficient modernisation of buildings, reducing the renewables levy, expanding the rail infrastructure, increasing the buyers' premium for e-cars, raising the commuter allowance, decreasing the VAT on train tickets, aligning the motor vehicle tax with a vehicle's carbon emissions, introducing a tax on flight tickets cheaper than 50 euros, and state climate bonds with guaranteed interest rates for citizens who want to invest their money. The CSU MPs from Bavaria also say Germany's coal exit can and should happen faster than by the proposed 2038 end date. An increase in gas power capacity could help make this possible, they write.

The concept also calls for having international climate action measures count towards the national carbon budget, as "every tonne of saved CO2 counts - no matter where it is saved."

However, a presentation on the discussion's results gave a glimpse into what the party is likely to propose. On CO₂ pricing, there is "very broad support" among CDU members for an emissions trading system for transport and buildings, said Jung, adding that such a system could be introduced "within months."

Party head Annegret Kramp-Karrenbauer said "we cannot do it without a price on CO₂." She added that Germany "cannot wait for a European solution" – in effect rejecting the idea of integrating the two sectors into the existing EU Emissions Trading System (ETS), a proposal popular among some conservatives, as well as among members of the Free Democratic Party (FDP). "We have to now make the first step," she said.

Earlier in the day, former finance minister and current Bundestag president Wolfgang Schäuble said Germany must act on climate policy – even without a final plan. "We will fail in the search for perfection. We must go step by step in the right direction. Therefore 'second best' is better than 'nothing'," he told party colleagues during an opening speech.

Recalling Schäuble's statement at the end of the day, Kramp-Karrenbauer said: "With our proposals of the coming days and weeks, it's not about presenting a perfect system of all possible and conceivable measures at a starting point 2019 or 2020. We are talking about a process." It is about deciding those starting measures that do not discourage people from the outset, but invite them to join, said the CDU head.

Part of the planned climate action legislation will have to be approved by both the Bundestag and the Bundesrat, the council of state governments. The Greens, the Free Democrats (FDP) and the Left Party are part of the government coalition of many of Germany's states. Consequently, Kramp-Karrenbauer renewed her call for a "national climate consensus" spanning political parties and outlasting a single legislative period.

"I believe that when the federal government puts its proposals on the table, we should spare ourselves entering the usual procedures which then might end in a mediation committee [in parliament] in a few months," she said. "Instead, we should immediately bring all parties in the Bundestag and in state governments to the table to debate what a national climate consensus could look like." Kramp-Karrenbauer said this included the planned climate action legislation, but also the implementation of the coal exit, and the idea to make sustainability a part of German Basic Law.

Among the experts who debated with CDU members was Ottmar Edenhofer, Director and Chief Economist of the Potsdam Institute for Climate Impact Research, a key advisor to chancellor Merkel on climate policy issues over the past months. "The Party has made a big step. A discussion like today's, spanning six working groups, would not have been possible a couple of months ago," Edenhofer told Clean Energy Wire. This was especially true looking at the difficulties the CDU had accepting the idea of a price on CO₂ emissions as an important instrument, as well as election campaigns a mere year ago, in which climate action had not only played little role, but a negative connotation was attached to it.

Environmental NGO Greenpeace criticised the reported plans as a "firework display of easy-peasy climate action." The CDU and CSU are leading "phoney debates" on CO₂ emissions trading, instead of deciding measures that would quickly bring down emissions, said spokesperson Tobias Austrup.

Greenpeace's reaction is a reference to a statement by Chancellor Merkel, who had reportedly called for an end to Germany's "easy-peasy" approach to climate action. Echoing her statement, finance minister Olaf Scholz of coalition partner SPD now said that the small-scale, detailed efforts that have marked the coalition's climate policy until now are not enough anymore. "We need a big coup in climate policy if we, as a government, want to continue to have the right to lead the country," Scholz told Spiegel Online in an interview.