The German government is examining the possibility of CO₂ pricing across economic sectors, according to media reports. Several newspapers report the chancellery has asked leading German research institutes to explore socially acceptable carbon pricing. The country’s transport ministry also wants the new climate cabinet, recently set up by Chancellor Angela Merkel, to debate CO₂ pricing in multiple sectors, according to ministry documents seen by Clean Energy Wire — although a CO₂ price was not included in the ministry’s draft recommendations for reducing transport emissions. Meanwhile, the economic association of Germany’s governing conservative CDU/CSU alliance [MIT] is calling for expanding the European emissions trading system (EU ETS) to include transport and other sectors. [Updated to include quotes by environment minister Schulze]

Germany’s government is taking a closer look at introducing a price on carbon emissions, according to media reports. The chancellery has commissioned a study looking into socially acceptable carbon pricing from the president of the RWI economic research institute, Christoph Schmidt, and the head of the PIK climate research institute, Ottmar Edenhofer, the Frankfurter Allgemeine Zeitung and magazine der Spiegel reported. The researchers put forward a concept for economy-wide carbon pricing late last year. Both institutes declined to comment on the report.

Germany’s transport ministry is also open to a debate on CO₂ pricing across several economic sectors, according to documents seen by Clean Energy Wire. “The cross-sector entry into CO₂ pricing – as proposed by the [transport commission’s] working group 1 and the “coal commission” – is to be debated by the climate cabinet,” says a letter accompanying the ministry’s one-page draft Climate Action Strategy for Transport. A transport ministry spokesperson confirmed to Clean Energy Wire that cross-sector CO2 pricing would be debated in the climate cabinet.

Environment minister Svenja Schulze, who has repeatedly called for a CO₂ price, has also said she would continue looking into possibilities. “At the moment, I am having calculations made on how such a model can be designed in a socially acceptable way,” the minister told Westfälische Nachrichten in an interview. “Because for me it is clear that the money that the state would earn in addition must be returned to the citizens - in such a way that people with lower incomes in particular benefit from it.”

Green pioneer Germany has struggled to make climate protection a reality. Despite a spectacular rise in power generation from renewables, its track record on cutting greenhouse gas emissions is mixed. Germany is on track to miss its own 2020 climate targets as well as targets set by the European Union in areas not regulated by the European Emissions Trading System (ETS), such as transport. The government is under pressure to present a viable plan to meet its 2030 targets, and it has pledged to draft a binding climate action law by the end of this year. Two government commissions – one set up to chart a path towards ending coal-fired power generation and another tasked with presenting proposals for the transport sector – have suggested considering a carbon price.

Germany’s environment minister Svenja Schulze (SPD) has repeatedly called for a CO2 price, but the rest of the government has not backed her up. A carbon price in Germany has been hailed by many research institutions as well as by the private sector as a much-needed addition to the country’s climate policy. However, opposition to the idea has been strong, not least because of fears over a public backlash if fuel and heating oil prices rise as a result.

However, the Friday’s for Future student protests, sparked by Swedish student Greta Thunberg, have recently left their mark in the German debate, keeping the climate issue on the agenda and putting pressure on politicians. While a number of conservative commentators and politicians have dismissed the protests, Chancellor Merkel and SPD leader Andrea Nahles have applauded the students’ engagement. Leading political magazine Der Spiegel, however, warned in an editorial that without action such words were only fuelling the students’ anger. Ultimately, carbon emissions had to become more costly, Michael Sauga wrote in the editorial, pointing to the concept put forward by researchers Edenhofer and Schmidt.

Climate economist Edenhofer, Germany’s most vocal proponent of a carbon price, told newspaper Tagesspiegel such a price had to cover all sectors, electricity, transport and heating. “Politicians have to pass a climate protection law that not only sets ambitious targets but also shows that market economies are able to reach those goals through technological innovation.”

The transport ministry, meanwhile, has drafted a one-page climate strategy. The paper, seen by Clean Energy Wire, consists of “possible key elements” of a programme to reach the nation’s transportation emissions targets. By 2030, Germany aims to cut transport emissions by at least 40 percent, compared to 1990 levels. But so far, emissions in the sector have remained stubbornly high.

“With these instruments, the targets can be reached without restrictions for mobility,” writes the ministry in a letter accompanying the paper. The paper states that the proposed measures could cut 52-55 million tonnes of greenhouse gas emissions by 2030. A ministry spokesperson would not comment on the "internal working paper".

On a one-page paper, Germany’s transport ministry has laid out possible key elements for its planned programme of measures to reach 2030 climate targets. It is divided into six areas of action, with several key elements for each.

The letter says the instruments’ details have yet to be worked out and the financing must still be debated by the cabinet.

Christian Hochfeld, head of think tank Agora Verkehrswende*, said he welcomes the news that transport minister Andreas Scheuer “has finally said what he wants, not only what he doesn’t want.” But, Hochfeld said, the proposals “are not detailed enough.” The only way to reach climate targets in transport is to set price signals for vehicles and fuels, Hochfeld said.

Hochfeld is a member of the transport commission’s climate protection working group, which was set up to make recommendations on how Germany can reach its 2030 targets in the sector, meant to feed into the ministry’s own plan. After months of meetings and faced with resistance from Scheuer, the multi-stakeholder expert group failed to agree on enough steps to reach the country’s climate targets in an interim report.

Scheuer also called for more action to push e-mobility. “We need charging points at home, at work and at the supermarket,” Scheuer told German tabloid Bild am Sonntag over the weekend.

The government should cover half the costs for private charging stations. “We immediately need one billion euros for this. This must be reflected in the federal budget,” he said. In a statement, the minister said he will convene stakeholder for high-level talks. Bild reported that a corresponding support programme could be implemented by July 2019.

Merkel has stepped up efforts on climate by introducing the so-called climate cabinet, which is set to meet for the first time next week. She has warned that “tough decisions” will have to be made soon to reduce emissions. 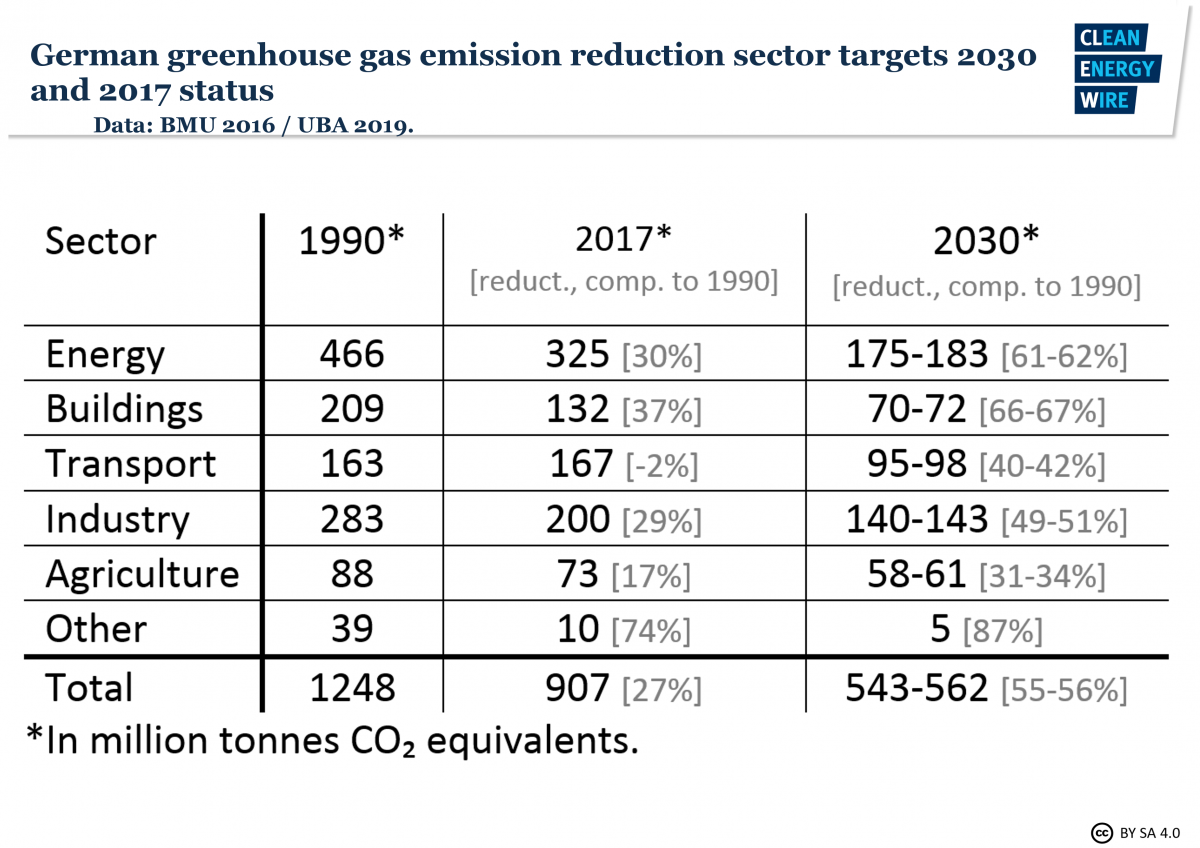 Annegret Kramp-Karrenbauer, who has taken over the helm of Merkel’s CDU party, “has mentioned general CO₂ emissions pricing in almost every speech for the past days,” wrote Andreas Rinke in an article for Reuters. Rinke added that the new conservative party head sees it as the CDU’s task to push market-based solutions to reduce CO₂ emissions – such as expanding the European emissions trading system to sectors beyond electricity.

“We need a change of course in climate policy that allows us to really protect the climate and at the same time preserve Germany’s industrial base,” the association’s chairman, Carsten Linnemann, told the newspaper. The draft climate action law introduced by environment minister Svenja Schulze, which gives each sector tight emissions reduction targets, was inefficient and dangerous for industry, he added. Applying the EU emissions trading system (ETS) to all sectors — and not just to energy and industry emissions — would allow for a much more efficient distribution of emissions cuts, Linnemann said.

*Like the Clean Energy Wire, Agora Verkehrswende is funded by the Stiftung Mercator and the European Climate Foundation.