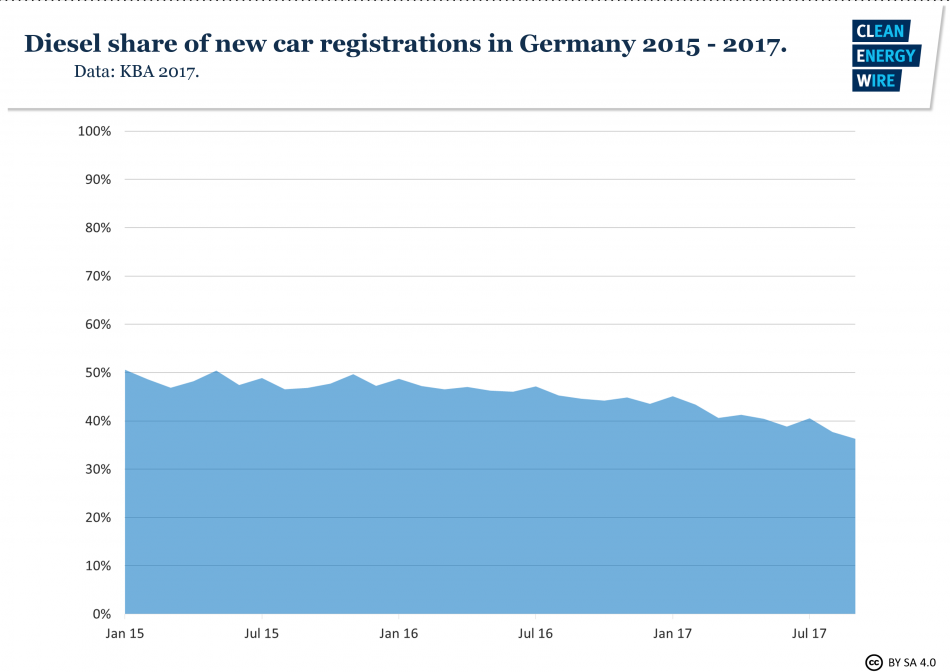 For background, read the dossier The Energiewende and German carmakers.

Germany's Monopolies Commission, which advises the government on competition policies, is calling for a shift from renewables support to a price on CO2 emissions to finance the country's energy transition. In a new report on the electricity and gas markets, it recommends:

Single players do not excessively dominate the electricity wholesale market in Germany, writes the Commission. The independent expert committee said that the market share of the four largest energy suppliers decreased to 54 percent in 2016 (2014: 62 percent).

Find the press release in English here and the full report in German here.

For background, read the CLEW factsheet Germany's new power market design and the dossier Utilities and the energy transition.

Find background in the CLEW factsheet Blockchain – the next revolution in the energy sector? and the dossier The digitalisation of the energy transition.

Policymakers and companies must urgently pay attention to the commodities required by a large-scale roll-out of electric mobility to avoid bottlenecks and secure a sustainable supply, according to mobility think tank Agora Verkehrswende*. “Securing the raw materials is not a show-stopper for electric mobility, but it must not be underestimated,” said the think tank’s head Christian Hochfeld. Raw materials needed for battery production include lithium, cobalt, and graphite, and electric mobility might push up global demand up to 15-fold, according to a new study by the Institute of Applied Ecology (Öko-Institut) commissioned by the think tank. The paper recommends battery research to lower demand, binding environmental and social standards, as well as a global recycling system. Hochfeld said these were necessary to ensure electric mobility’s credibility as a technology to protect the environmental and climate.

*Like the Clean Energy Wire, Agora Verkehrswende is funded by the Stiftung Mercator and the European Climate Foundation

Thanks to unexpectedly strong demand, new budget e-car maker e.GO has expanded its production plans, reports public broadcaster WDR. The company aims to make up to 100,000 electric vehicles per year, considerably scaling up original plans for 20,000 cars. It said it would create 2,000 jobs in four factories in the western German city of Aachen in the state of North Rhine-Westphalia, where Deutsche Post e-car subsidiary Streetscooter is also based.

Read the article in the Westfälische Nachrichten in German here.

Swedish utility Vattenfall will use salt to store solar and wind power as heat in a Berlin pilot project. “Energy can be stored in salt without loss over weeks and months until it is needed,” said Vattenfall project manager Markus Witt in a press release. Vattenfall said the project could be a contribution to the integration of heating into the power sector.

Find background in the CLEW dossier New technologies for the Energiewende.

Should the next German government decide to seek a coal exit, it must also care for the workers' and mining regions’ future, said Michael Vassiliadis, head of Germany’s largest mining trade union IG BCE and one of Germany's most prominent opponents of a coal exit, in an interview with the Handelsblatt. “If Jamaica [a coalition between the Christian Democratic Party/Christian Social Union, Free Democrats and Greens] is to become the shut-down-coalition for coal, then the coalition parties will have to present a realistic plan on what will happen to the employees and the regions,” said Vassiliadis.

Read the interview (behind paywall) in German here.

For more information, see the CLEW factsheets When will Germany finally ditch coal?, Climate & energy stumbling blocks for Jamaica-coalition talks and the CLEW article Coalition watch – The road to a new German government.

The annual electricity cost for an average German household reached a record high in September, reports Christian Siedenbiedel based on data by price comparison websites Verivox and Check24. A four-person household consuming 5,000 kilowatt-hours per year pays on average 1,527 euros for power under the basic contracts by local utilities, according to Check24 data. For contracts with cheaper suppliers, this decreases to 1,262 euros. The total average was up 3.7 percent compared to last year, writes Siedenbiedel.

For background, read the CLEW factsheet What German households pay for power.

Western German grid operator Amprion’s decision to raise power grid fees by about 45 percent in 2018 is in large part due to French supply issues this past winter, reports Andreas Macho in WirtschaftsWoche. Amprion was forced to frequently employ grid stabilising measures, because of France’s increased need for electricity produced in Germany due to unscheduled nuclear plant overhauls, the company told WirtschaftsWoche.

Read the article (in German) here.