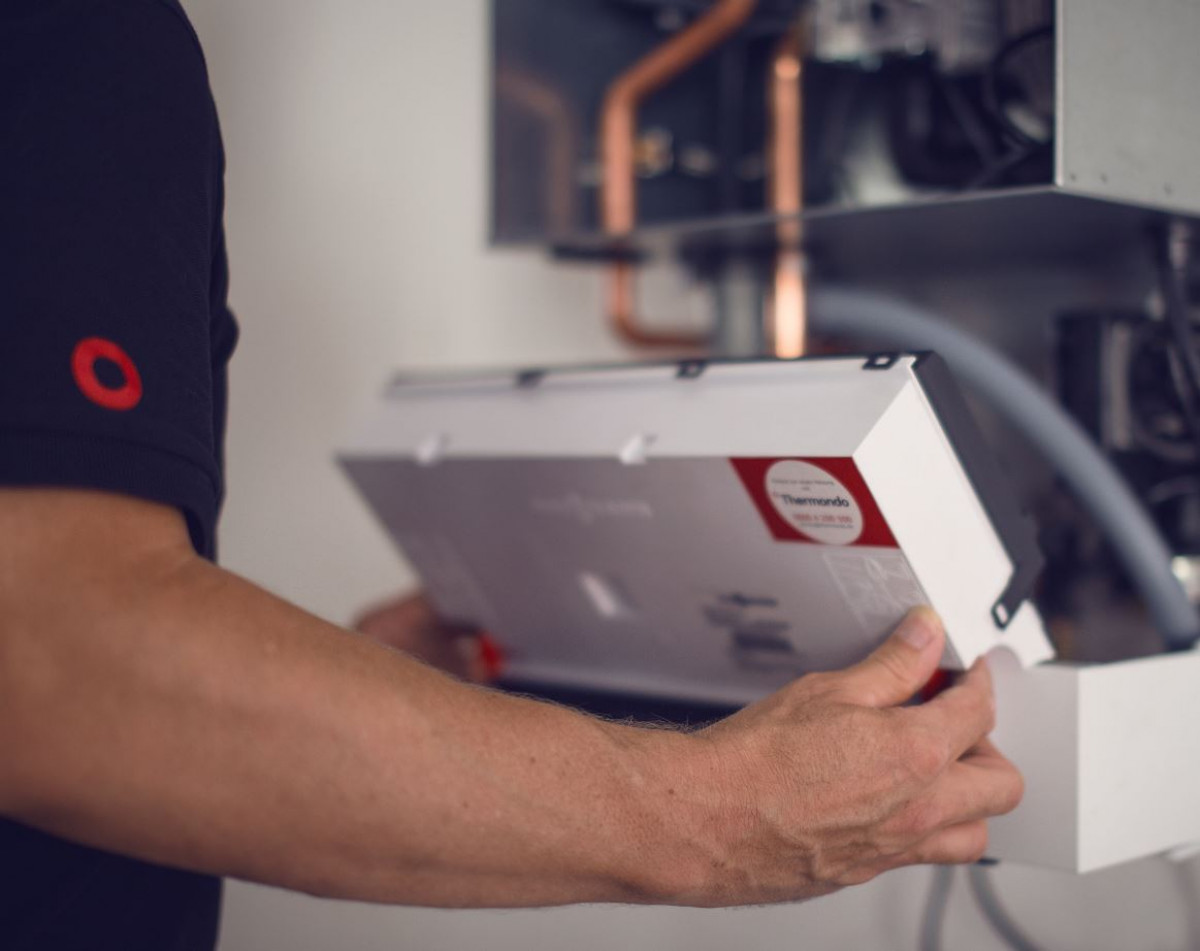 Clean Energy Wire is stepping up its coverage of how business is being transformed by Germany's energy transition. To showcase the upheaval underway in the world’s fourth largest economy, we have launched a series on start-ups that aim to disrupt entire industries, propelling them towards carbon-neutrality. Number two in the series: Berlin heating company Thermondo.
Improving heating efficiency might not be your first choice for a topic if you want to attract large crowds. But Berlin start-up Thermondo saw an enormous business opportunity, because it realised early on that modernising heating systems is key for reaching Germany’s climate targets. Their idea of launching an online portal to help homeowners replacing their boilers was rewarded with strong growth rates, and Thermondo now aims to become Germany’s largest decentralized energy supplier. It is venturing into gas sales, and has already set its sights on PV installations as well. Clean Energy Wire spoke with Thermondo’s head of marketing Stephan Herwig about the future of heating and the transformation of large incumbents.

Clean Energy Wire: How would you evaluate the current progress of the energy transition here in Germany, especially in heating? 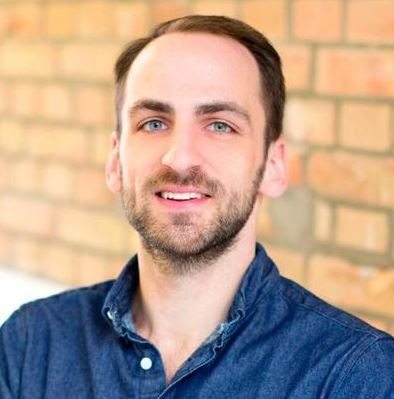 Stephan Herwig: Germany is unfortunately not on the right track at the moment. While only about 20 percent of our total energy consumption comes from electricity, the energy transition seems to focus on electricity. By not focusing enough on the enormous energy saving potential from the heating sector, we are putting the success of the energy transition at risk. There are 13 million old heating systems that urgently need replacing. Many people are even willing to modernise their appliances, but the market currently doesn’t have enough installation planning and installation capacity to serve the demand. Especially at the start of the heating season, it can take several weeks just to get a replacement estimate from a heating installer.

Also, heating systems are not exactly a topic that many people want to deal with, and the processes involved can be very complex, for example when it comes to the confusing array of financial incentives that are currently available. It’s little wonder many people shy away from it.

Where is the future of heating headed?

We do see a strong trend towards heat pumps [that are powered by electricity and can be combined, for example, with photovoltaics], especially when it comes to new installations.

But Thermondo is currently focused on boiler replacements – we don’t do new installations at present. During the modernisation of heating systems, newer technologies like heat pumps still face too many uncertainties: Will the investment really pay off after the time advertised? It’s also a different picture in existing building stock because of heat pumps’ lower heating load - buildings have to be well insulated for their use. To make this technology more attractive, it’s therefore key that consumer organisations or energy consultants can work out holistic concepts for refurbishments, to guide clients through this process. For the time being, a large majority of clients will continue to opt for conventional heating systems. Therefore, gas will remain the primary heating technology for a long time to come. But we are seeing a trend for more hybrid solutions with customers combining their gas or oil heatings with solarthermal energy

Gas will remain the primary heating technology for a long time to come. But we are seeing a trend for more hybrid solutions with customers combining their gas or oil heatings with solarthermal energy

Could you explain how gas sales now complement your business model?

Basically, we offer three types of product. First, a cash sale, in which the client buys the heating unit including installation in cash with the option of booking a maintenance contract. The second product is our “Thermondo365” contract, in which clients can choose to repay investment costs over 2 to 10 years, and also receive a full-service package for a monthly instalment covering any future maintenance or repair costs for the heating unit. In December 2018, we launched our third product “Thermondo365plus”, a carbon neutral heat lease, which is similar to Thermondo365 but includes the gas supply - including a certificate for carbon offsetting, which is a fundamental part of this product.

What’s your opinion on the recent announcement that Shell is taking over German battery pioneer Sonnen and possibly also green energy provider Lichtblick? Do you see a trend here?

It shows that times are changing and many large energy companies are looking to build more sustainable portfolios. They’re looking to invent, build up or acquire future-proof business models. Shell is one of those players who realised this relatively early on, and is now marching in the right direction. Gas and oil players will have to evaluate where the journey will take them in 15, 20 or 30 years.

Many utilities also wonder how they can reach end customers, and how they can establish a sustainable relationship with them. Many municipal utilities and other energy providers try to differentiate themselves from competitors with only tiny price differences, which – in the age of the empowered customer – results in customers switching between service providers often and willingly. Few of the large players have concrete ideas how they can stand out. In principle, the question is: Who is present in German households to offer additional services in the future?

Few of the large players have concrete ideas how they can stand out. In principle, the question is: Who is present in German households to offer additional services in the future?

What are your main competitors on the way to fulfilling your objective to become Germany’s largest decentralized energy supplier?

You have mentioned one of them yourself: Sonnen is a promising company with a strong value proposition. Sonnen is focusing on electricity, but they’re also an integrated energy service provider. We’re still focused on heat, but electricity is also on our agenda. We plan to reintroduce fuel cell heating systems this year, which will offer interesting intersections with the electricity sector – in future we will also look to expand our product portfolio to include heat pumps and PV systems. Fuel cells run on gas, but they provide both heat and electricity, which can either be used on-site or fed into the grid. But apart from new companies like Sonnen, we’re also competing with 55,000 mostly small and conventional installation companies as well as with the large utilities.

What are the next milestones for your company?

This year, we’re refocusing on growth and aim for around 40 percent sales increase. Our business model involves many people, which means the number of our employees needs to grow accordingly.

A further milestone would be our entry into the sale of solar PV, which would be an entirely new product for us. It’s mainly a decision about employing even more staff, because adding PV to our portfolio would require electric installation, which so far doesn’t play a role in our ‘pure’ heating world.

We already offer solar thermal systems. Especially in the south of Germany, around 10 to 15 percent of clients decide to support their heating unit with solar thermal technology.

So far, your business focuses exclusively on Germany. Do you plan to expand abroad?

We keep an eye on several European markets, and some of them are interesting for us. But at this stage, we don’t have any concrete plans yet. The German market is huge, and even though we’re a fairly large player, our market share remains relatively small. As I said, there are about 55,000 companies installing heating systems, many of which are very small – just the classic plumber. Many others are HVAC (heating, ventilation, air conditioning) service providers, meaning they don’t focus on heating exclusively like we do.

What are the main regulatory obstacles slowing your business expansion?

It would help us enormously to get more clarity on local and national subsidy schemes. At the moment, it remains unclear where we’re headed in this area. For example, there is a new programme that will include support for fuel cell contracting, but it’s limited to two years, which is too short, especially when you consider this will require an entirely new marketing campaign.

How would you evaluate the general environment for energy start-ups in Germany?

In general, it’s fair to say that Germany is enamoured of laws and regulations, which is not conducive to an environment where start-ups feel at home. Start-up financing can also be a problem, especially larger funding rounds at later stages of development are normally secured with international investors. But for early-stage financing, there has been good progress in recent years. German venture capital has become more active recently.

I would also say that we have a strong culture of encouragement and support among start-ups - there is a very active exchange. Germany also boasts a very strong education system, translating into strong new blood in engineering and digital expertise, which means that Germany is nevertheless an attractive location for start-ups – especially here in Berlin, where a lot of international talent is based these days.

Additionally, there are many organisations that stick up for start-ups. In the energy sector, there is the Eco Innovation Alliance, where more than 50 energy start-ups can exchange ideas, and which serves as a common voice. Another example is the German Startups Association. I also see a trend to networking among start-ups and German Mittelstand companies. We try to foster this dialogue. It’s not about us against them – rather, we can achieve progress together.