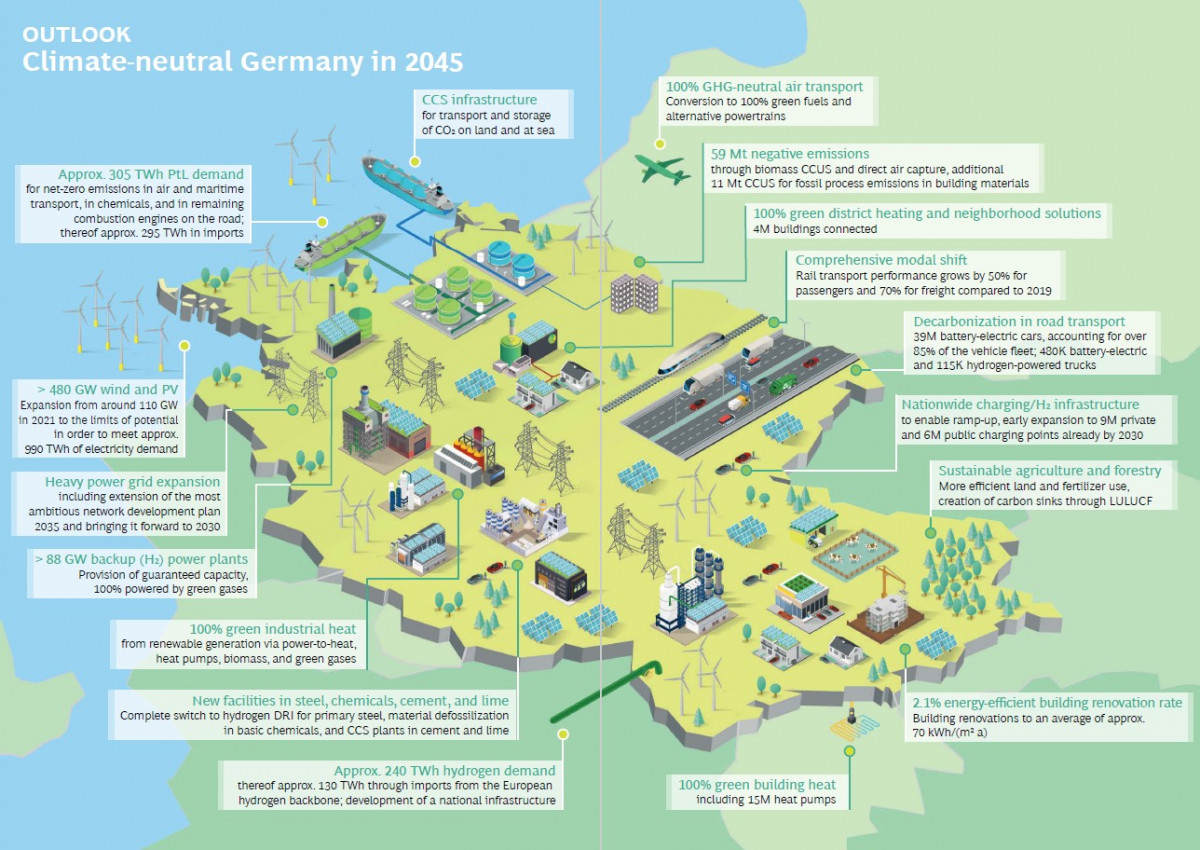 Climate neutrality 2045 requires massive and rapid changes in all sectors of the economy. Source: BDI/BCG.

Germany’s next government must act quickly, trigger large-scale investments and set the right framework to ensure the country transforms its economy to reach climate neutrality by 2045, said industry association BDI and Boston Consulting Group (BCG) in a report. As an update to the landmark "Climate paths for Germany" report from 2018, the paper lays out a programme for climate and the future of the country’s economy. The industry association says additional investments of about 100 billion euros annually are necessary to reach the 2030 climate target, Germany has to largely eliminate investment in fossil technologies within the next nine years, and coal-fired power generation must be phased out much earlier than planned. Massive renewables expansion and the build-up of hydrogen networks, as well as speeding up planning and permit processes are among the main tasks for the next government. Election winner the Social Democrats (SPD), the Green Party and the pro-business FDP start official negotiations today (21 October).

The next government coalition must quickly set the right framework to enable the “greatest transformation in Germany’s history” to get the country on the path to climate neutrality 2045, said industry association BDI and the Boston Consulting Group (BCG) in a report. Additional investments of about 100 billion euros annually are necessary to reach the interim greenhouse gas reduction target for 2030 (-65%). [here is an English summary of the report]

“The good news is that the goal of climate neutrality by 2045 is extremely ambitious, but technologically feasible in principle,” said BDI president Siegfried Russwurm at a press conference. However, time was running out and the “current uncertainty and lack of plan in German climate policy” endangered Germany as an industrial location. “Germany now needs a major new start with a historic and rapid economic programme for the future of the [industrial] location.”

Today’s report presented a detailed feasibility study on how the national 2030 climate targets can be achieved “through swift and consistent action and efficient investments,” said Russwurm. It was published on the same day (21 October) that election winner the Social Democrats (SPD), the Green Party and the pro-business FDP meet in Berlin to kick off the weeks-long negotiation marathon to build next government coalition.

Additional investments of 860 billion euros needed by 2030, "failure not an option"

“The implementation of climate action measures will require additional investments of around 860 billion euros by 2030, which the state, citizens and companies will have to raise,” said Russwurm. In addition to the funds, the next government coalition has to set the right guidelines to make Germany climate neutral, he said. It has to introduce a “historically unparalleled infrastructure offensive” for a massive expansion of electricity, district heating, CO2 and hydrogen networks, charging and hydrogen filling stations as well as rail networks. The coalition would also have to make sure that planning and permit procedures would be made easier and a lot faster, said Russwurm.

Failure or not introducing major changes “is not an option” and would also deter other countries from climate action.

The country's industry has fully woken up to the challenge of climate change and the necessary transformation the economy has to undergo. However, this follows a long period of strong resistance to strict climate targets. Today’s report is the follow-up to the 2018 "Climate paths for Germany" report by BDI and BCG, widely seen as a turning point in the industry's general approach. It was the first major industry-led report that showed protecting the climate can benefit the economy at the same time.

In its pursuit of climate-neutrality by 2045, Germany has set its sights on extending the energy transition to its famed heavy industry. Sectors such as steel, cement and chemicals are some of the Energiewende's toughest nuts to crack, because deep emission reductions can't be achieved simply by replacing fossil fuels with renewable power. Instead, entirely new production methods are required. Several reports on how Germany could reach climate neutrality 2045 have been published in recent months. KfW Research, the research division of government-owned banking institution KfW, has said that five trillion euros of investments were needed to make the country climate neutral by mid-century in total. The climate-related additional investments amounted to an average of 72 billion euros annually, or 1.9 trillion euros by 2045.

Eliminate fossil investments in this decade

The immediate changes required in the current decade are “drastic”, says the BDI report. Germany had to largely eliminate investment in fossil technologies within the next nine years – and in some sectors right away. “In the industrial sector, the legislated 2030 climate target requires fossil technologies to be abandoned wherever possible when investment decisions are made.”

Germany’s electricity system must meet a more than 40 percent increase in electricity demand by 2030 while simultaneously reducing its absolute emissions by almost 60 percent, says the report. To this end, coal power will have to be phased out by that year, but maintaining supply security will require more than 40 gigawatt (GW) of new (“H2-ready”) gas-fired power plants – “the largest expansion of thermal power generation capacity in Germany to date.”

In transport, new vehicles must already be largely converted to alternative drive systems by 2030. Achieving this will require an extensive, coordinated investment in nationwide charging infrastructure and hydrogen filling stations along all major traffic routes within the next nine years.

In the building sector, investment behaviour needs to change even faster, says the report. Starting immediately, every new building should be equipped exclusively with completely locally emission-free heating solutions. The annual renovation rate must increase significantly in the short term. 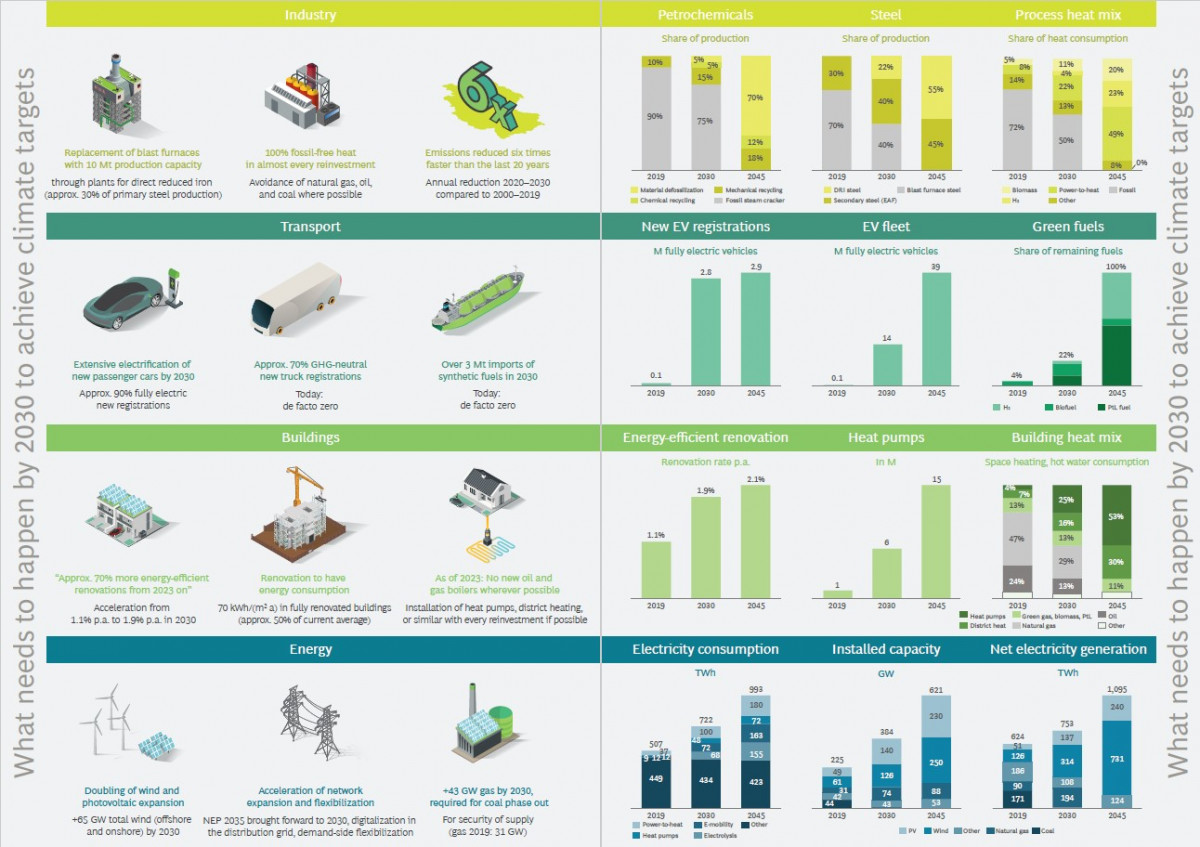 Germany’s national endeavour can only have a major impact on global climate change if it brings international followers and partners on board, said BDI and BCG. “This is all the more reason for Germany to strongly endorse a European and internationally coordinated climate policy.”

In previous years, BDI and its members had often criticised the introduction of ever-stricter climate targets, and raised doubts about the feasibility of reaching them in the industry sector. Earlier this year, following a landmark ruling by the constitutional court, Germany’s outgoing government of Chancellor Angela Merkel’s conservatives and the SPD had agreed to introduce stricter greenhouse gas reduction targets for the coming decades and pull forward the target for climate neutrality to 2045.

“We have deliberately refrained from discussing the climate targets,” said Russwurm today. “We have accepted the political guidelines.” Thus, consultancy BCG had based its calculation on the targets defined by the legislator.

Climate action must become top issue for next chancellor

Russwurm called on the next government to make climate action a top issue, and said the chancellor should ideally be the person to lead on this. “Such a comprehensive programme needs central strategic control in the government, not least because of its many cross-relationships with other issues,” said Russwurm.

The possible new German coalition government of SPD, Greens and FDP could install a “new climate ministry”. Until now, climate action is mainly dealt with in the environment ministry and there have been many struggles of power vis-à-vis other relevant ministries such as transport, economy or agriculture.