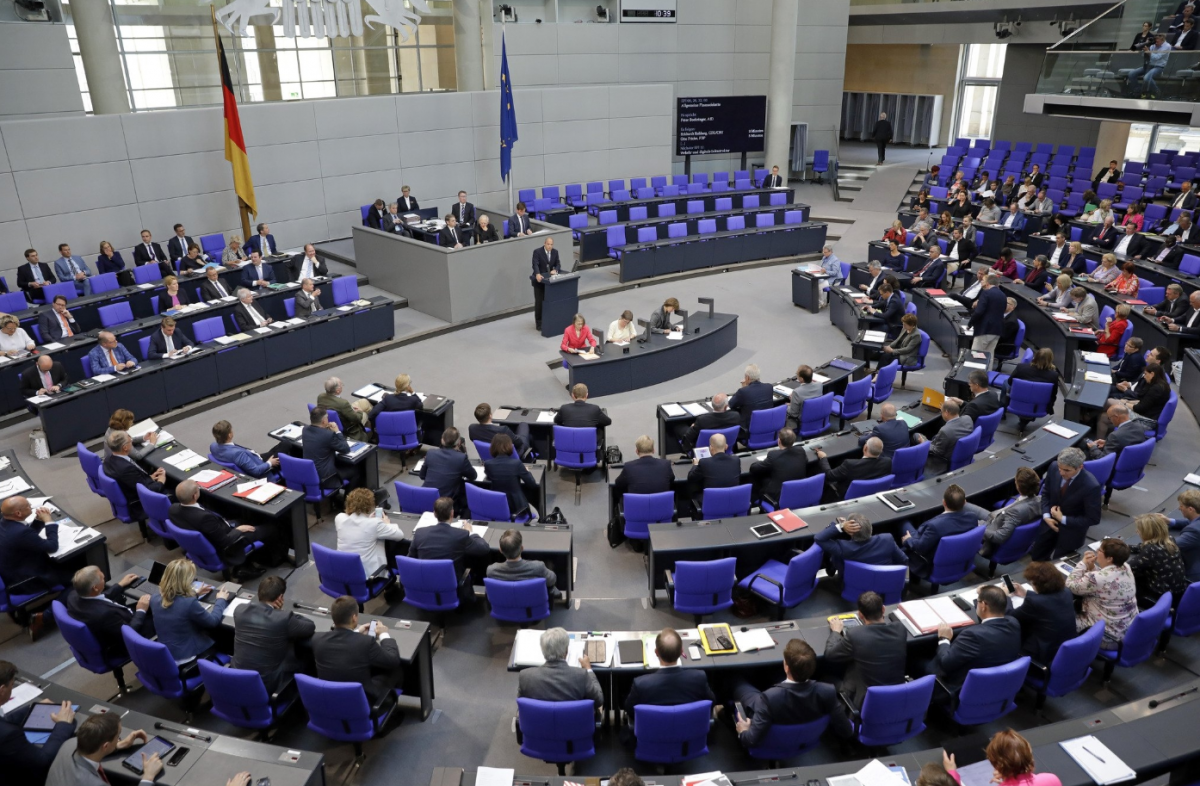 Chancellor Angela Merkel's Conservatives insist on a low initial price tag for CO2 emissions to secure public acceptance for the government's new climate strategy. In the first parliamentary debate on the package unveiled Friday, parties traded blows over the effectiveness and economic consequences of the Climate Action Programme 2030. Environment minister Schulze conceded that the entry price was set "very cautiously."

Following widespread criticism that a planned CO2 pricing system in Germany is going to be ineffective because emisstting greenhouse gases will be too cheap, Chancellor Angela Merkel's Conservatives say a low entry price level is necessary to get the public on board the government's new climate strategy. "It's part of the truth that we're not only criticised that it is not enough, but also that there are a lot of people who wonder 'what's happening there? What will it do to my life? Can I keep my heating that uses oil? Can I continue to commute, and what does it mean financially?'," said Ralph Brinkhaus, CDU party parliamentary group leader. "Those people are concerned, and we have to respond to them if the basic approach of the packet is correct - that we want to do it with the people, not against them."

Brinkhaus' comments followed suggestions by the the Social Democrats (SPD), they are prepared to raise the initial CO2 price. Malu Dreyer, acting head of the junior coalition partner to Chancellor Angela Merkel's conservative CDU/CSU alliance, suggested her party would agree to double the initial price tag for emissions from 10 20 euros per tonne.

Conservative parliamentary group leader Brinkaus added the package stood for a smart approach that does not "smother the country with bans," but rather seeks to incentivise more climate-friendly behaviour. Brinkhaus stressed that the package for the first time introduces a CO2 pricing mechanism in transport and heating, adding that his party was “taking seriously" criticism that the price was set too low. Brinkhaus said that "in a few years", prices should be high enough and carbon budgets curtailed that "creativity will be needed to get by with less CO2”. The starting price of 10 euros is to gradually rise to 35 euros by 2025 under the new Climate Action Programme. Brinkhaus added it was important to have a concept that is not overthrown with every change of administration. "If everyone is needed [for climate action], we need broad acceptance." He said that consensus could not be achieved with a "take it or leave it" approach but rather by reaching out to each other. "That's what I also expect from our critics," Brinkhaus said with a view to the Greens.

Chancellor Merkel the day before also signalled that the CO2 price could rise further over the next few years, noting that Sweden already has a price of 115 euros per tonne. "I'm sure we will see challenging political debates in the 2020s", Merkel said at a CDU climate conference.

Environment minister Svenja Schulze conceded in parliament that she would have hoped for a higher initial CO2 price. "The entry price has been set very cautiously," Schulze added, but insisted that the idea to choose a careful approach was right. She stressed that the package for the first time "turns climate action into law" and stipulated binding emission reduction goals for all sectors and future governments. "I'm very satisfied with that," Schulze said, but

The parliamentary group leader of the Green Party, Anton Hofreiter, said the government had demonstrated that it was out of touch with large parts of society that protested for more ambitious climate action on the day the 2030 programme was announced. "The worst part is that you're now calling this 'that what is possible,’" Hofreiter said, arguing that the package as it stood could hardly serve as a consensus that his party would agree to. "I don't know any scientist who says this package comes even close to being sufficient or well made," he said, adding that this would ultimately lead to Germany missing its 2030 climate targets in the same way it was going to miss its 2020 targets.

Hofreiter added that a successful energy transition with rigorous renewables expansion would be the basis for all climate action, but criticised the fact that the package did not achieve anything in that respect. "Lifting the support cap on solar PV is important – but it's only a small step. Apart from that, you effectively started the phaseout of wind power production in Germany," Hofreiter said with a view to the package's abolishment of the solar power support cap and the parallel introduction of minimum distance rules for new wind turbines.

Christian Lindner, head of the pro-business FDP party, criticised the proposed carbon pricing mechanism that starts with fixed prices and only later turns into a trading system, saying it was in fact a new tax. "There will be legal questions tied to this CO2 tax in disguise," Lindner said. "We will only consent to measures that are covered by basic law.” A legal expert with the Foundation for Environmental Energy Law earlier this week warned that the carbon pricing mechanism proposed by the government could actually face severe legal hurdles in the way it is set up. Lindner also said higher aeroplane ticket prices that were not coordinated with other European countries would merely lead to people booking flights abroad. With a view to Swedish climate activist Greta Thunberg, Lindner said "overblown rhetoric" and "panic" should not be guiding Germany's climate policy.

Left Party politician Sarah Wagenknecht said the package amounted to a "pointless cashing in from citizens that won't save the global climate but rather damage the social climate”. Wagenknecht argued that two-thirds of all global emissions could be traced back to merely about 100 companies that caused them. "But instead of forcing these climate killers to change course with regulatory measures, you want to raise the heating costs for normal families.”