No room for Energiewende complacency despite 2014 CO2-drop 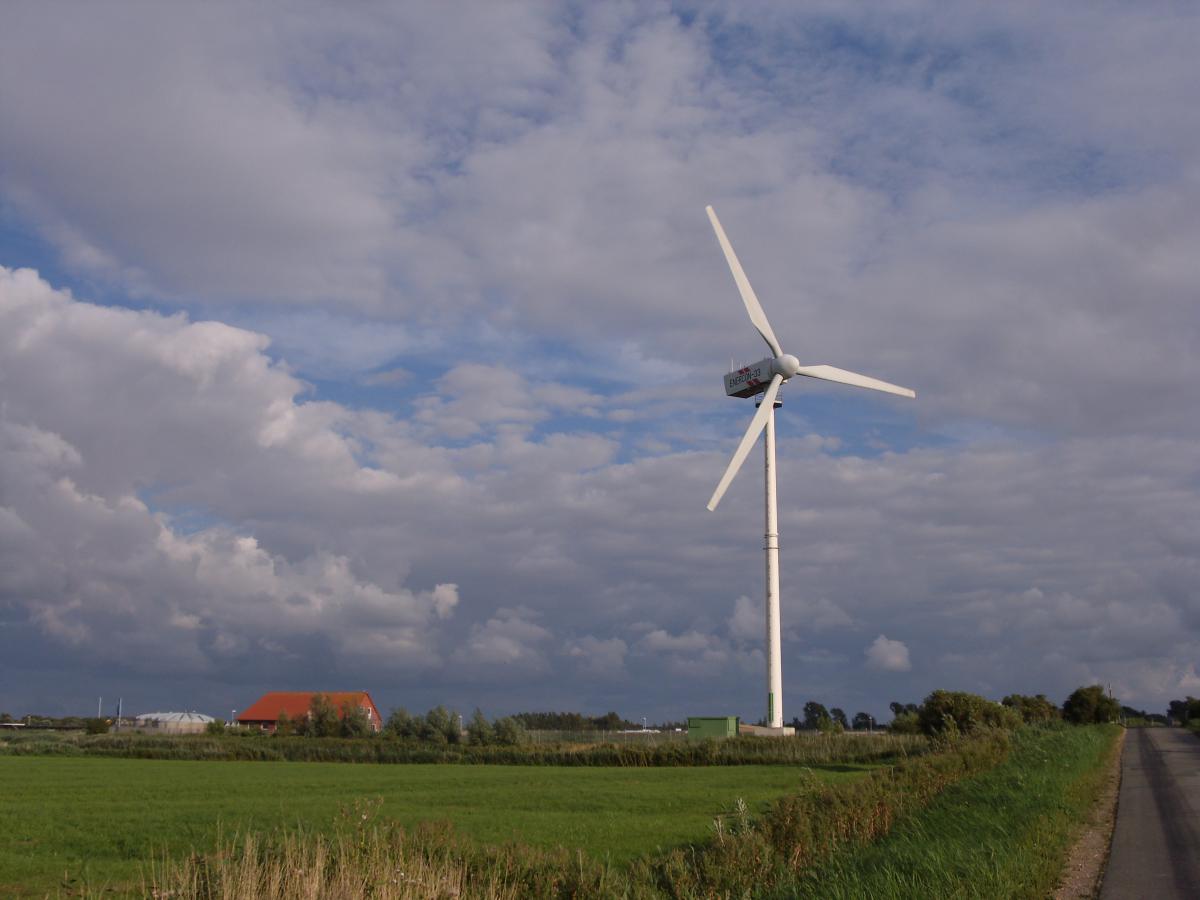 Renewables boom: In December 2014 German wind turbines produced more power than ever before. © S. Suck, CLEW
Proving Energiewende critics wrong or only a minor step in the right direction? Recent data indicated that Germany has started substituting power from hard coal with renewable electricity while lower power consumption has contributed to a fall in greenhouse gas emissions. But experts from all sides of the debate agree: efforts to make the energy transition a success have to be stepped up.

Emissions in 2014 were among the lowest since 1990 – only in 2009, the year of the economic crisis, did Germany emit less CO2. Overall CO2 emissions fell by 30 million tonnes, with a reduction of 16 million tonnes from the power sector, the think-tank Agora Energiewende* says in a report published on Wednesday, concluding that Germany is back on track for its 2020 greenhouse gas reduction target of 40 percent fewer emissions compared to 1990 (See Figure 1).

Still, Volker Breisig, partner at consultancy PricewaterhouseCoopers (PwC) and co-author of the PwC Energiewende Outlook, told the Clean Energy Wire efforts must be stepped up in coming years. “Otherwise electricity from nuclear power stations will at least partially be compensated by lignite and hard coal generation and then CO2 emissions would increase again,” he said. "If the weather in 2015 is not as mild as it was in 2014, emissions will probably rise again.” 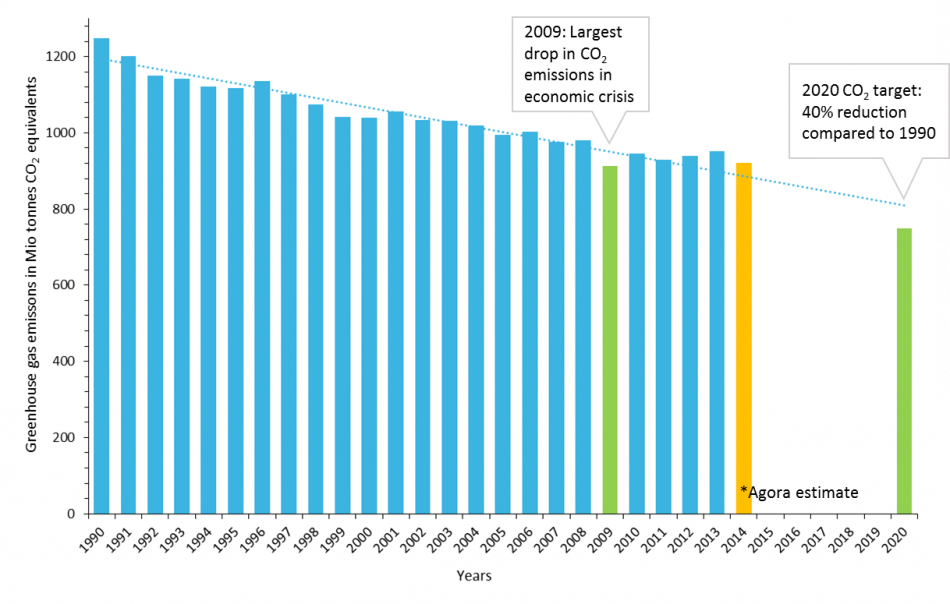 The Agora report highlighted a new record for the share of renewables in German power consumption: in 2014 renewables overtook lignite as the most important power source, covering 27.3 percent of German electricity demand.

At certain times on 11 May 2014 – a very sunny and windy day – 80 percent of power consumed was delivered by renewables, while on 12 November, which was windless and overcast, renewables covered just 10 percent of demand.

“The former Energiewende paradox shows signs of resolving itself,” said Patrick Graichen, director of the Agora Energiewende, referring to the phenomenon highlighted by Agora in 2013 that saw rise in CO2 emissions rise despite a growing share of renewable energy in the power mix.

There was also good news on power consumption, which increased only slightly over the past 25 years - and actually fell significantly in 2014 - while German GDP has grown 40 percent since 1990. “We can see a clear decoupling of power usage and economic growth, pulled off by a big industrial country like Germany,” Eberhard von Rottenburg, energy expert at the Federation of German Industries (BDI) said.

Meanwhile, competition from the growing renewables sector started to push old hard coal-fired power stations out of the market. “But current problems with the implementation of the Energiewende persist," said Breisig. "In the conventional power sector, most electricity is still generated from lignite, the energy source with the highest CO2 emissions.”

Increased power generation from fossil fuels was largely responsible for the rise in greenhouse gas emissions between 2009 and 2013. In 2013, the amount of power generated from lignite reached its highest level since 1990.

At the end of 2014, the government adopted a Climate Action Programme to set Germany back on track for its 2020 climate target. But the country’s dependence on lignite still troubles environmentalists and the parliamentary opposition in Berlin. Oliver Krischer, deputy leader of the Green Party parliamentary group in the Bundestag, says that only ambitious structural change in the power sector would allow Germany to reach its 40 percent greenhouse gas reduction target.

“The government wants to cut some additional 22 million tonnes CO2 from the power sector – that is far from enough,” Krischer told the Clean Energy Wire. “The old lignite power station Weisweiler near Aachen emits this amount alone. Only a 70 million tonne-reduction would put the climate target within reach.”

The government plans to debate a draft law to curb emissions from the power sector in spring 2015, which many experts expect to be discussed in conjunction with the overhaul of the overall power market design.

The biggest surprise in the 2014  data was a significant decrease in overall energy and in electricity demand. Power consumption fell by 3.8 percent to the lowest level since 1990 bar that reached by a 6-percent-drop in the year of the economic crisis 2009.

Primary energy consumption, including all energy used by households (electricity, heating, fuel), industry and the transport sector, fell by 4.8 percent (without weather adjustment) to its lowest since 1990, according to figures released by the AG Energiebilanzen in December 2014.

Other European countries, however, saw similar declines, suggesting that mild weather played a major role. Energy consumption in Denmark fell by 5.8 percent over the first nine months of the year and total inland consumption for energy uses in the United Kingdom declined by 4.1 percent over the same period.

Agora director Graichen said it was difficult to pin down one major factor that would have impacted power demand to this degree and that a combination of many small efficiency measures by both households (such as increased use of LED lighting) and industry could have played a role alongside the weather.

Jakob Flechtner, energy expert at the Chambers of Commerce and Industry (DIHK) said  both companies and households have made continuous efficiency gains of an average 1 percent a year.

“Four fifths of companies in Germany concern themselves with measures and technologies to become more energy efficient, but last year’s sudden decrease in power consumption was mostly due to the mild winter of 2014,” Flechtner told the Clean Energy Wire.

BDI expert von Rottenburg said that there could still be potential  for more energy efficiency but not unlimited so.

“German companies achieved real technology-driven efficiency gains, while other countries have seen more structural changes or de-industrialisation, meaning that industry reduced or moved production,” von Rottenburg told the Clean Energy Wire (also see Figure 2). To ensure that Germany continues to avoid such industrial decline, the BDI calls for a “more stable policy framework when it comes to power prices and the energy sector.” 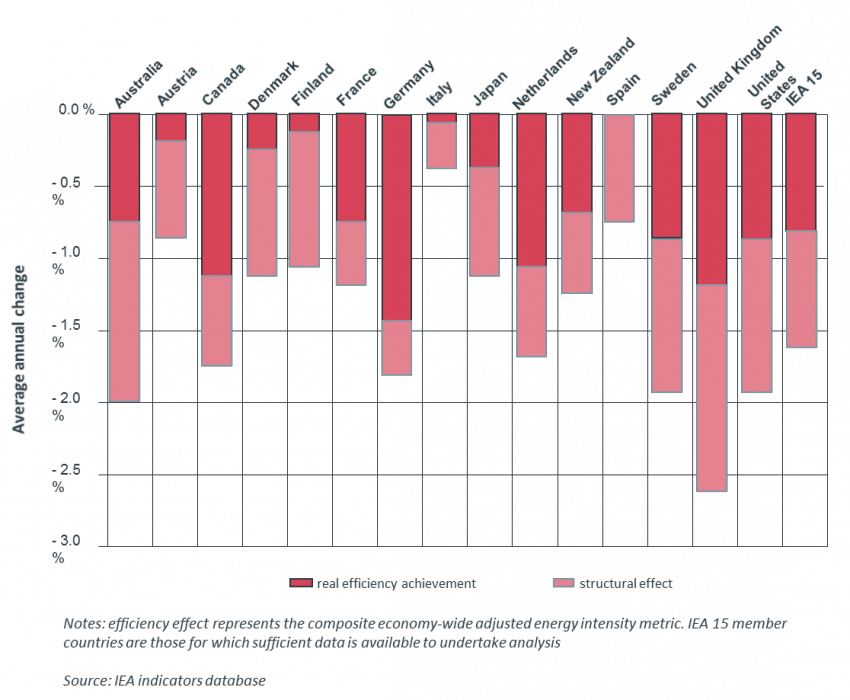 Power prices will remain one of the hot issues in 2015 but some relief for households is on the horizon.

The Agora study calculates that consistently low prices at the electricity exchange combined with a small reduction in the surcharge for renewables will lead to a slight drop in power prices for households and industry in 2015.

The next test for the transition of the power system will come when E.ON shuts down its Grafenrheinfeld nuclear power plant by May 2015 as part of Germany’s nuclear phase-out. The reactor has generated 10 terrawatt-hours of electricity annually. Based on a prognosis by the Leipziger Institut für Energie, Agora predicts that this shortfall will be made up renewable power, in particular offshore wind parks to be connected to the grid in 2015.

Agora anticipates steady growth of renewable capacity within the government’s envisaged target corridor towards a 40-45 percent share in power consumption by 2025. But Oliver Krischer of the Green Party is less optimistic. “New measures in the Renewable Energy Act make it more difficult for citizens and cooperatives to participate in the power market,” Krischer said. “The trend in renewable development has been halved by this government.”

* The Agora Energiewende and the Clean Energy Wire are both funded by the Stiftung Mercator and the European Climate Foundation.