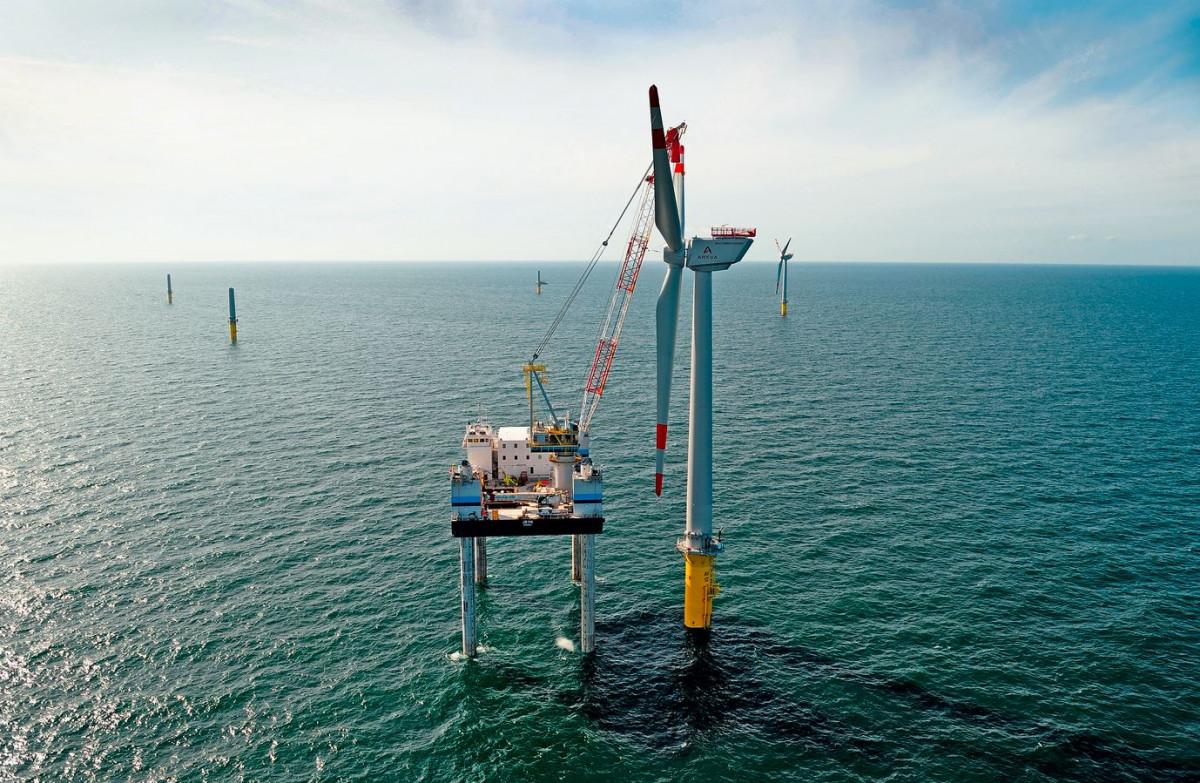 The average turbine added in 2019 was installed about 90 kilometres off the coast in 36 metre water depth. Photo: DOTI / Matthias Ibeler

The expansion of offshore wind power capacity in Germany has exceeded that of onshore turbines for the first time ever last year. This is both due to a particularly bad year for onshore expansion and the increasing competitiveness of offshore turbines. Within ten years, offshore wind power has developed from a niche technology to a strong pillar of the country's future energy system. But industry groups warn that strongly rising company demand for CO2-free electricity could outstrip supply if offshore expansion levels are not adjusted.

A total of 160 new offshore wind power turbines with a combined capacity of 1.1 gigawatts (GW) started feeding into the grid in 2019, meaning that the expansion at sea was greater than that of onshore wind power for the first time, wind power industry associations BWE and BWO told journalists in Berlin.  The total number of turbines in the German North Sea and Baltic Sea thus has reached nearly 1,500, while the installed capacity climbed to over 7.5 GW and practically fulfilled the government's 2020 expansion target ahead of schedule, the industry lobby groups said. Generating over 25 terawatt hours of electricity, offshore turbines contributed about four percent to Germany's gross power consumption, they added.

According to industry group Fachagentur Windenergie an Land, the gross capacity expansion of onshore turbines reached about 0.9 GW with 276 turbines in 2019. BWE and BWO only publish their final onshore expansion figures on 28 January. Thousands of planned onshore wind projects in Germany are currently put on hold, mainly due to regulatory conflicts with aviation authorities but also due to protest groups challenging new installations in court. Permits for new turbines fell by 70 percent since 2016, according to German utility association BDEW.

Andreas Wagner, head of industry association Stiftung Offshore Windenergie, noted that in 2010, only 12 offshore wind turbines were installed in German waters, meaning the capacity grew about 100-fold in ten years. "We've moved from uncharted territory to establishing a new standard," Wagner said, adding that current expansion planning merely foresees a doubling of capacity over the next decade. The 2030 offshore expansion goal needs to be raised from 15 GW to 20 GW and planning for long-term expansion after that also has to begin soon due to the long preparation phase needed for offshore projects. The average turbine added in 2019 had a capacity of nearly 7 megawatts (MW) and were installed in a depth of 36 metres and nearly 90 kilometres off the coast. 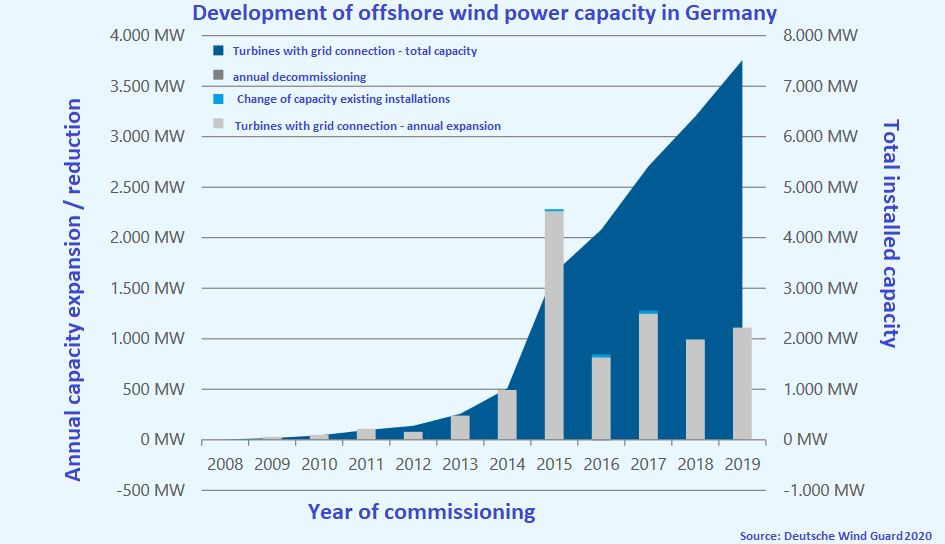 Wagner said an expansion of 2 GW of offshore capacity per year would be possible and Germany has to retain a strong home market in order to defend its position as a technological leader in offshore wind power. In 2018, about 25,000 people were employed in offshore wind, creating a revenue of nearly nine billion euros, the associations said. "We have to continue this success story," he said, adding that up to 2 GW of available capacity could immediately be allocated by the government to cushion a nosedive expected in 2021-2022.

The wind power associations said that the European Commission estimates that the offshore wind power capacity across Europe could reach 450 GW by 2050. Technology from Germany could play a major role in the renewable energy source's expansion and turbines with a capacity of about 50 GW could be installed in German waters alone, they added. The UK is set to remain the largest offshore wind power market in Europe for the foreseeable future, though its expansion plans to a large extent are based on technology supply from German producers, the associations said. Germany and Britain in late 2019 also mulled intensifying their cooperation on offshore wind power generation to advance the production of hydrogen at sea, synthetic fuel that is produced without causing CO2 emissions.

Hermann Albers, head of the German Wind Energy Association (BWE), said the average turbine capacity grew from 3.5 megawatts (MW) in 2014 to 7 MW in 2019, meaning "an extreme cost reduction" for offshore wind power. Albers said the government's recently agreed coal phase-out roadmap, which stipulates that large quantities of coal capacity will be taken off the grid very late in the period up to the end year 2038, could seriously hamper offshore wind's development if power prices and CO2 emissions allowance prices remain low.

Moreover, Albers said the government would be wrong to calculate with a falling total power demand for Germany, as decarbonisation plans by many energy-intensive industries are likely to further boost the demand for electricity produced with low-carbon energy sources. "The industry's demands today often mirror that of the renewable power sector," Albers said. Many companies today had developed decarbonisation strategies that are far more ambitious than that of the German government, with some aiming to reduce their net-emissions to zero well before 2050, he added.

Albers cautioned that a failure to provide sufficient renewable power capacities could result in a "scramble for CO2-free electricity" among industrial companies. Researchers from the Institute of Energy Economics at the University of Cologne (EWI) warned in early January Germany's expansion of renewable energy will be unable to keep up with future demand, leading the country to miss its 2030 renewable power share target, resulting in what they describe as a "renewable power gap."

This could already be observed by steel producers or carmakers addressing offshore wind power companies directly to sound out whether direct supply of clean electricity through power purchase agreements (PPAs) is a possible option for their decarbonisation strategies. In the world's first offshore wind PPA signed in December 2019, German chemicals producer Covestro and Danish offshore wind company Orsted agreed to trade the output of 100 megawatts (MW) for a price fixed for 10 years from the planned Borkum Riffgrund 3 offshore wind farm in the German North Sea. The project planned without support payments is expected to be fully commissioned in 2025.